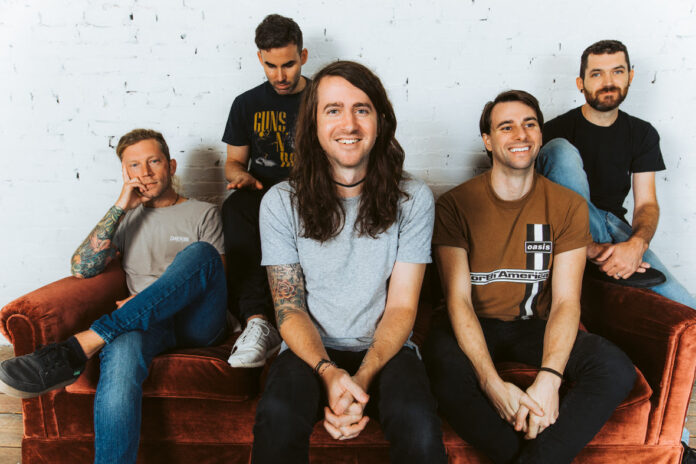 Mayday Parade have just announced that they will be releasing a new EP, Out of Here, on October 16th via Rise Records. To coincide with the announcement, Mayday Parade have also released a new song called “Lighten Up Kid,” which can be heard below.

Back in early-March, Mayday Parade — comprised of Derek Sanders, Brooks Betts, Alex Garcia, Jake Bundrick, and Jeremy Lenzo — got into the studio with longtime collaborators Zack Odom and Kenneth Mount to record Out of Here.

“Lighten Up Kid” is the perfect single for this current time, exploring the power of self-life and finding that inner confidence, which is a theme Mayday Parade has touched on all throughout their career. “’Lighten Up Kid’ is about trying to find yourself and the strength to keep fighting for what you believe in,” Bundrick said. “It’s about being or feeling cut down and hung out to dry but standing up for yourself in the end.”

The EP follows the release of Sunnnyland in 2018, which was the fifth full-length record from Mayday Parade, and their single “It Is What It Is, which was released earlier this year.

Although the band haven’t had the year they were expecting, with tours and festival appearances canceled due to the ongoing COVID-19 pandemic, they’ve still found ways to connect with fans through a series of live Happy Hours. They also released a feel-good cover of The Beatles’ “I Want to Hold Your Hand,” which featured appearances from The Maine’s John O’Callaghan, We The Kings’ Travis Clark, Dan Lambton (Formerly of Real Friends), Knuckle Puck’s Joe Taylor and Grayscale’s Collin Walsh.

Pre-orders for Out Of Here are now available here. Mayday Parade have a busy 2021 to look forward to, with appearances lined up already for Riot Fest, Four Chord Music Fest, Nova Rock Festival, Greenfield Festival, Hurricane Festival, and Southside Festival, with more to come still. In the meantime, fans can keep their eyes out for special themed, ticketed live streams planned throughout the fall.