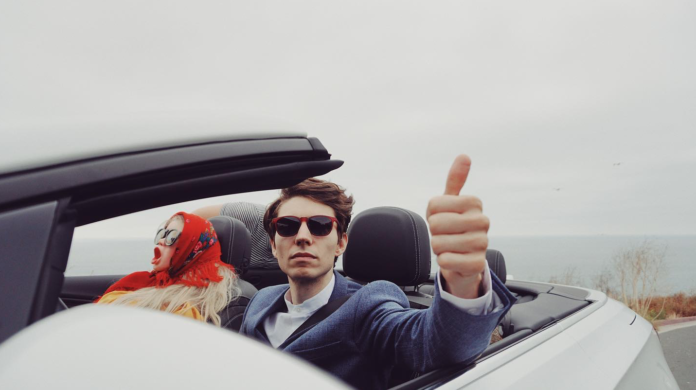 In early 2015, fascinated by the new wave of what he calls “pop apologist” bands – acts like CHVRCHES, Imagine Dragons, The Wombats, and The 1975 that embraced pop music “in a way that started to legitimize pop in the minds of the alt crowd, but also alternative music in the minds of the pop crowd” – Gabe Mouer released Youth is Fading, his first EP as Patternist. Technically a solo project, Patternist was born out of Mouer’s frustration with having to organize other people in a band, though he isn’t doing it alone. As his touring life has become more demanding, Ashton McKenzie – who started out doing graphic design and helping with social media – now acts as Patternist’s tour manager and plays keys and bass live (they’re sometimes also joined by a live drummer).

Initially, Patternist was Mouer doing his take on the “pop apologist” genre, though since then, the project has become “much more cathartic and much more personal.” On September 6, the first Patternist full-length record, I Don’t Know What I’m Doing Here, will be released. It’s “still a Patternist record, if such a thing can be said” – but it breaks from the pop aspects of Mouer’s earlier material and takes on a move narrative focus. Musically, it’s much more guitar-driven; lyrically, “everything feels a bit more honest.”

Mouer’s favorite lyricists have always been storytellers: David Bazan of Pedro The Lion is his favorite lyricist of all time. He’d always wanted to write with a more narrative approach, but up until recently, was nervous about doing so. Generally, the musical arrangement will come first, so setting a vocal around that can feel constricting: “I’ll feel limited from a lyrical standpoint because I’m trying to shoe-horn lyrics into an already-crafted melody,” Mouer explains. Like any artist, he had to spend some time figuring out who he was as a musician before Patternist could create the music he wanted to create.

Earlier this summer, Patternist shared “Bikes” and then “I Don’t Feel Real,” his first new music since the Give It Up EP in 2016. Leading up to the release of Give It Up, Patternist began to build some traction within the industry, as conversations began with labels and booking agents. But once the EP dropped, “it’s like those lines kind of went dead.” Mouer was left feeling defeated. After a national tour to support the EP, “I kind of didn’t know who I was.” Filled with self-doubt, he slipped into “this deep, like, ennui, this listlessness.”

Even in those moments of doubt, he was still writing: “I Don’t Feel Real” and “Here’s One For The Kid In The Back” – an anthem for the underdog that’s not sure what else is out there – were written shortly after that tour. The creative fire inside hadn’t died down, but Mouer sat on those songs, unsure if he could take releasing music that failed to connect with anyone.

Art, however, isn’t just about self-expression. Mouer reflects that in its purest form, “art is a way to connect us; it’s a way to save us from feeling lonely.” Writing just for himself wasn’t getting the job done, and he finally reached a point where he couldn’t put off releasing new music anymore.

The conversation circles back to David Bazan, a songwriter who always has something to say himself, but whose music also connects so deeply with other people. Mouer likens Bazan’s writing to storytelling on film and TV: “you’re diving into something universal about the human condition through these stories [that are] incredibly specific but also relatable, because… it speaks to something that’s sort of shared in all of us.” Someone listening to a Pedro The Lion record may not relate to the subject matter at hand, but they can understand the feelings of hopelessness or frustration.

For the new record, Patternist has signed to InVogue Records, who he’d been in contact with since the beginning of the recording process. Mouer had known InVogue as primarily a pop-punk and post-hardcore label, but it turns out that label owner Nick Moore was interested in pop music, and – perhaps more importantly – was excited about Patternist. When it came time to release the record, Mouer wanted to partner with “someone who was really passionate about the music” – and Moore “just really seemed to get it.”

I Don’t Know What I’m Doing Here combines the spirited, upbeat vibes of ultra-modern synth-pop with the emotion and wistful poeticism from the height of Myspace/neon emo. The record feels novel, familiar without being too much of a throwback. Mouer cites emo mainstays Jimmy Eat World, Saves The Day, and The Get Up Kids as major influences, and says that Seattle bands like Gatsby’s American Dream and Daphne Loves Derby “really shaped the way I approached not just the guitar, as a sort of conduit for storytelling, but songwriting as a whole.” He refers to himself as an “emo kid at heart,” making the new record “more my voice than anything I’ve done up until this point because it feels more true to my history as a songwriter.”

This authenticity is best exemplified in “Bikes,” which follows album opener “Get A Grip.” Released in June, “Bikes” didn’t immediately take off, but Mouer cites it as his favorite nonetheless. “I can’t really listen to my music because I just cringe at everything,” he admits, “but ‘Bikes’ is a song that I can listen to and go, “Oh okay, yeah, I accomplished what I set out to do.” The song is about “the pains of nostalgia”; the lyrics are “50% truth, 50% fiction” as he weaves stories his mom told him about moving all over with his own childhood experiences. But the past isn’t necessarily better than the present, and while it’s easy to “retcon our own history,” stewing too much will keep us from being happy and “focusing on making things good now.” Though still a pop track, “Bikes” is guitar-heavy, visceral and immediate in its delivery. It took him the longest to finish as he perfected the melody, but ultimately helped set a precedent for how the final record would sound.

Reflecting on the writing and recording process for the album, Mouer says his passion for music has been “reinvigorated.” Shifting focus away from making one-off singles to creating a full album allowed him to experiment on tracks like “Bikes,” which has multiple musical movements and time-signature changes. This process felt “so much freer” and allowed him to come into his own as a songwriter.

Whoever we are and however old we are, we all are in search of answers. Why did this happen? Why do I feel this way? Why am I this way? I Don’t Know What I’m Doing Here doesn’t have any answers, but – spoiler alert – finding answers isn’t so easy. Mouer shares that it’s a record “for people that feel like me, that are just filled with doubts and maybe a little misanthropy and maybe feel a little lost and lonely.” For anyone who’s felt alone, and for anyone who’s doubted themselves, Patternist is here to make you feel less alone in not having the answers. “It’s okay to just feel doubt and sit with doubt and learn to live with doubt,” Mouer says, rather than “having to pretend that we all know what we’re doing.” After all, none of us actually know – so we might as well put on our favorite records.

I Don’t Know What I’m Doing Here will be released on September 6 via InVogue Records; the record is available for pre-order here. Stay tuned with Patternist on his website for more info and tour dates in support of the record.