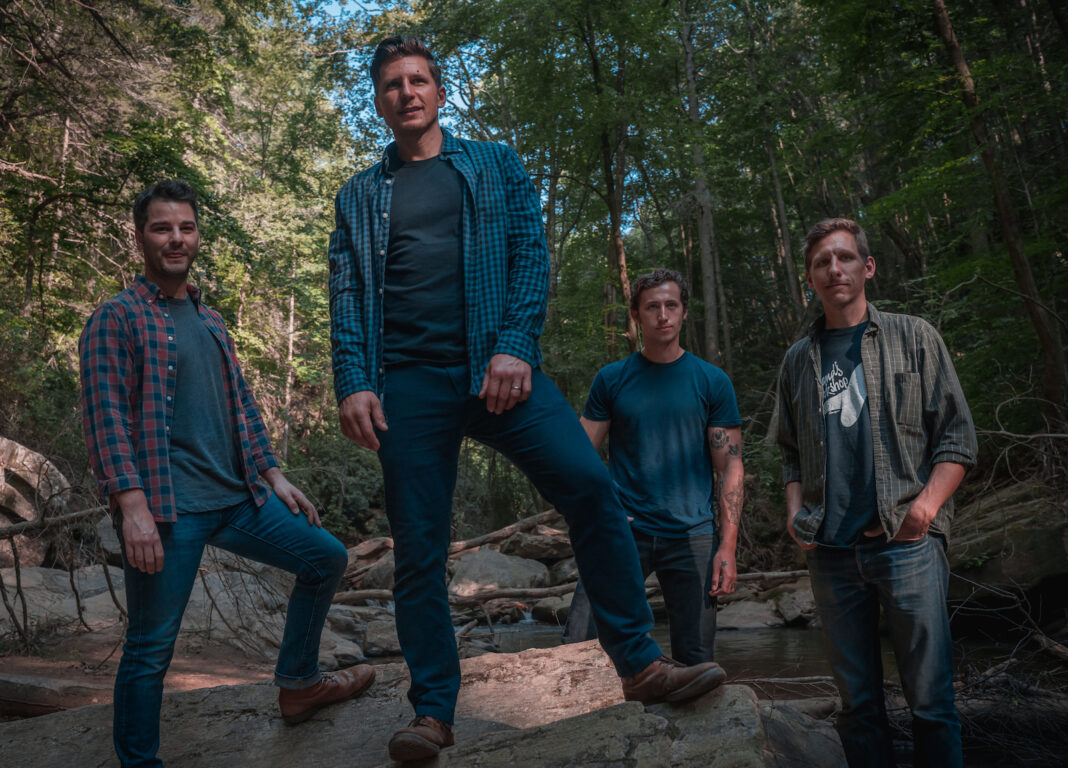 As humans, our most basic instinct is to survive – to do what it takes to stay alive. It may seem simple, but when pain hits us in the form of depression, addiction, and mental illness, the idea of slipping into the depths is appealing. In those moments, darkness is familiar, like tucking into bed under a nice, warm blanket. Surviving is no longer merely an instinct; to survive means actively making a choice not to sink in, and instead to climb out- to find the light, however far away it may be.

With their new record, Lilac, The Early November find themselves poised at that edge: aware of just how tempting the comfort of darkness can be, but still holding on in search of a way out. On “Ave Maria,” frontman Ace Enders speaks from the perspective of his 14 and 18-year-old self: the kid who has a guitar and a dream, but not much else. Though he comes from a place of wisdom and experience – someone who has been touring the world and making records for nearly two decades – he hasn’t lost the sense of who he was before it all began.

Performing “Ave Maria” that night, Enders recalls the ups and downs The Early November has experienced throughout their career, and the constant pressure to make “the best song you ever make.” Though he’s a confident frontman, when he’s not on stage he’s not the type to seek attention – he considers himself “a little bit of an awkward human.” Discussing the song, he talks about desire. “When you’re younger, if you’re gonna do something, you’re gonna do it.” As he’s gotten older, life has changed, leaving him with different things to worry about (“you’re not young enough to be cute anymore… nobody’s rooting for you anymore, you’re not hip”) – and to this day, he’s connected to that feeling of not caring what people think and that drive to be himself.

Enders clarifies that he doesn’t know exactly where he’s going, but sustainability and security are the goals. Though he has some security now, holding on that isn’t always easy – and despite years of hard work, he admits that he sometimes wonders if there will be a point when he, and the band, won’t be able to continue. There have been “many times” where he’s thought to himself that things aren’t working anymore, but he speaks about it matter-of-factly: failure is an inevitable part of life, and even when things aren’t working, you have to keep going. “What else are you gonna do?” he reflects. “No one is going to do it for you. You can sit there and complain, but it’s not going to do anything for you, other than make things take a lot longer.”

Make no mistake: although Lilac explores the depths of incredible pain, it is not a sad record or a depressing record. Instead, it’s a record to remind us of how, even when we feel every ounce of that pain, we can keep on going. Initially slated to come out in the fall of 2018, the album was pushed back to an eventual September 2019 release. The original version “wasn’t the right album”; Ender recalls that “We heard a lot, ‘It’s really cool, I don’t think I’d listen to it often, though.'” Although the intent was to make a record about life’s dark places, he ultimately wanted to create something that better represented who he was as a person – on all sides.

On “Hit By A Car (In Euphoria),” Enders realizes that perhaps succumbing to darkness isn’t what he wants after all – even if it would mean an end to the pain. Standing on that edge and contemplating sinking in is, unfortunately, “where a lot of us exist all the time.” Most of the album was made on the fly, with emotions coming out in a stream-of-consciousness – letting whatever the emotion is happen and not flattening it out. Often, he feels, when people try to perfect something, “that kills that line.” In its acceptance of the depths and reality of sadness, “Hit By A Car” – and Lilac as a whole – is incredibly life-affirming and unabashedly hopeful.

It comes as no surprise that writing songs helps Enders pull himself out of depression and sadness. A sense of belonging, of feeling understood, is a basic human need; he admits that most of his issues stem from not feeling his own worth. When he finds himself spiraling, he takes a step back and looks at the people who have been affected by what he’s done. Hearing that a song or a record has helped someone get through something like addiction is “the ultimate compliment”; it’s a sign that “what I was feeling or trying to do worked for someone, and that’s what digs you out of it, thinking of that stuff.”

As a band always in the middle – big enough to tour regularly, but not big enough to coast on their success – The Early November still see and talk to the people who are listening. Enders describes himself as someone who’s “always been the kind of artist that is very driven by the connection with people who are coming to the shows,” and says the band has had a lot of luck in doing things that have connected with people. But sometimes the songs that stand out to people surprise him; as an example, he points to “Pretty Pretty,” an unreleased song that he played in a backyard back in 2002. One video – from before YouTube even existed – made its way around the internet enough for people to find out about the song enough to regularly request him to play it live (and also cover it themselves).

Just like a band can never know what will resonate with fans, they don’t know what will do well commercially. Enders recalls countless record label and distributor meetings where the band has been told a certain song will surely take off soon: “you get that rush, and you’re psyched, and everybody’s ready to work, and then the next day somebody else comes in, and they’re like, ‘Actually this is the one that’s gonna hit’ – and that’s the one that hits, and you’re like, ‘okay, I guess I’ll just sit back down and wait till next time.'” It’s a guessing game that can lead to doubt and self-questioning – but it’s impossible to know, with certainty, what will work.

At the core, what’s most important to The Early November is creating something real. “Real” isn’t about the instrumentation of a song or the aesthetic of a band; it’s about “the person who wrote it and why they wrote it – that’s it.” Lilac leans into melodies and hooks – a trumpet part in “Fame” echoes the melody of “Ave Maria”, and “Perfect Sphere (Bubble)”, “Comatose”, and “Hit By A Car” are poised for a singalong – something that Enders has often explored in writing for other artists, but that he’d previously strayed from in his own music out of a fear that people would “look at [it] and be like, ‘Oh, it’s not real, you’ve changed’ – but that’s who I am, and that’s what I’ve been doing for my entire life.”

Born of the moments where Enders found himself doing “whatever I can to hang on by my nails,” Lilac was a record he needed to write. He admits that, like everyone else, he’s guilty of writing to keep the wheels moving in the machine that is the music business – but Lilac came from a drive to write with intention. The record’s theme of struggling with dark places, addiction, and mental health ties back to his childhood, of what it was like to be “a small kid, in a non-speaking English class because you couldn’t sit with normal people.” Now, he is the adult who was that kid: an adult who thinks about how he interacts with others and wonders how people judge his music “based on what they think I am”; an adult who knows the industry can decide to accept him or who might “not want me in it anymore or deciding even if I belong or if I have a place to be”; an adult who’s deciding whether he’s going to turn to a substance like alcohol to “mellow out the problems” or to help him write.

When we find ourselves at the edge – questioning if we belong and if we’re accepted, and what a way out might look like – letting go feels so easy, and staying alive becomes the boldest choice we can possibly make. “Our Choice” finds Enders exploring what exactly it means to be faced with that choice. The song shows two people, or two sides of our self: “One of you can’t get up off the floor, and the other person is standing above you – ‘why can’t you get off the floor? You can get up; you can do it.’ And then the one person on the floor is like, ‘I can’t get up – this is how I feel, my legs are broken, my everything is broken, I can’t move.’ And then… you go down to the floor, and you are on the floor as well with that person. That’s what it feels like sometimes, to be doing this.”

“Our Choice” is also a look at us as a society, and how we’ve collectively “decided to glorify the idea of being alcoholics who only care about partying and that is the biggest thing of our lives.” Enders is frustrated with the constant need for instant gratification, which he feels has made it “cool” to regularly use substances that “we shouldn’t be doing every day.” It’s an epidemic, but “we did this to ourselves… we made it an epidemic – we wanted it.” Perhaps, along with that, the only way out is together.

Darkness and pain are inevitable, and that’s not something we will ever be able to prevent or change. But as Enders sings on “Hit By A Car,” when that wave hits you, “you don’t have to break” – although “there will always be pain,” there will also always be light. For the people who find themselves in darker times right now, he hopes that Lilac will be a guiding light: “You can’t just shut it off – so I hope that it’s a light to navigate your way to an exit.”