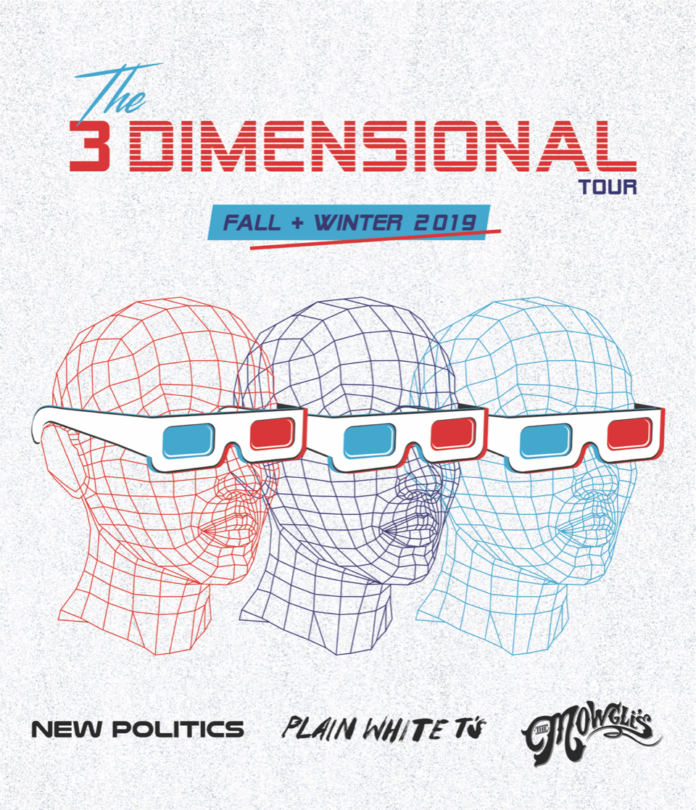 A grand trifecta of indie bands are heading on tour this fall. New Politics, Plain White T’s (Hey There, Delilah anyone?) and The Mowgli’s will be joining forces for yet another trek around the states as part of the The 3-Dimensional tour. Fuel your nostalgia with a tour that’s three-dimensional— in all aspects.

“Louis, Soren and I are looking forward to sharing the stage with these talented bands, providing fans with the ultimate music experience,” said David Boyd, lead singer of New Politics. “We are hard at work putting together an incredible, high energy show, filled with the official live debut of songs off our new album along with the hits that everyone knows and loves.”

The tour will begin November 12 in Chicago, and will carry the three bands through the end of the year, wrapping up December 20th in Sioux City. Fresh off a 10-year anniversary tour and a comeback single aptly-titled “Comeback Kid”, New Politics is also confirmed for an appearance at the recently-announced Riptide Festival, set to roll through Fort Lauderdale November 23-4. The Mowgli’s are just wrapping up their Summer Vacation tour, set to end tommorow night (August 22) at the Kentucky State Fair. Meanwhile, Plain White T’s are gearing up to release a deluxe version of last year’s Parallel Universe, out August 23. The Mowgli’s last album remains ‘Where’d Your Weekend Go’, released back in 2016. See a list of joint tour dates below, and find tickets here!