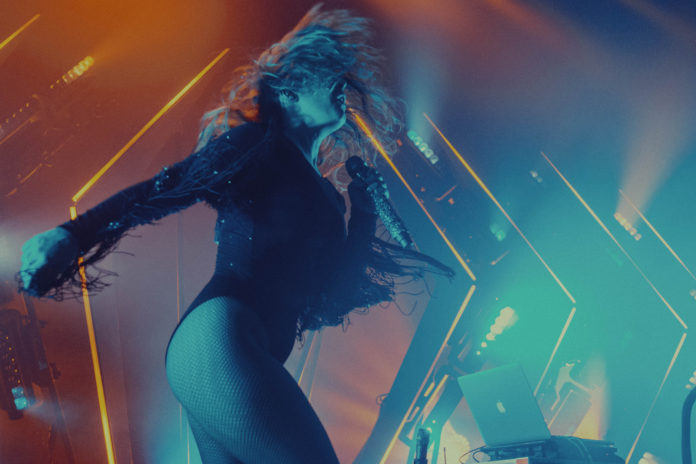 It takes a very special band to sell out two shows on a Monday and Tuesday night, and Sylvan Esso did just that.

People love going to concerts. People love going to concerts on the weekend. Usually only die-hard fans will risk a late night on a Monday or Tuesday, and who can blame them? It has to be an amazing evening to be worth getting up the next day extra sleepy. But dance/pop darlings Sylvan Esso made concertgoers feel elated to be staying up a bit later than usual. First playing Monday night at The Riv then moving to The Vic for a more intimate show Tuesday night, the duo sold out both venues and had both crowds dancing and singing along.

For their show at The Vic, vocalist Amelia Meath donned a leotard complete with fringe sleeves and high platform sneakers. She paraded across the stage like Mick Jagger and asked her fans how many of them were seeing Sylvan Esso for the first time. A fairly large amount of people screamed. When Meath heard the response, she smiled and kicked it into high gear. The band opened with “Sound”, the opening track to their newest album, What Now. Released in April of last year, What Now was nominated for a Grammy in the “Best Dance/Electronic Album” category, launching their work into the spotlight and sending the masses to Spotify to look up their music.

As Meath and keyboardist Nick Sanborn jammed throughout the night, their energy became more contagious. Sylvan Esso’s stage setup looked like the inside of an alien spacecraft (which works so well for their music), and the flashing rainbow lights made everyone feel like they were in a dance club. If Meath and Sanborn can sell out two venues in Chicago on dreaded weeknights, it’s clear that the rest of their summer shows are going to be just as successful.

Sylvan Esso will be playing Life is Beautiful in Las Vegas at the end of September. For tickets to the festival, click HERE.