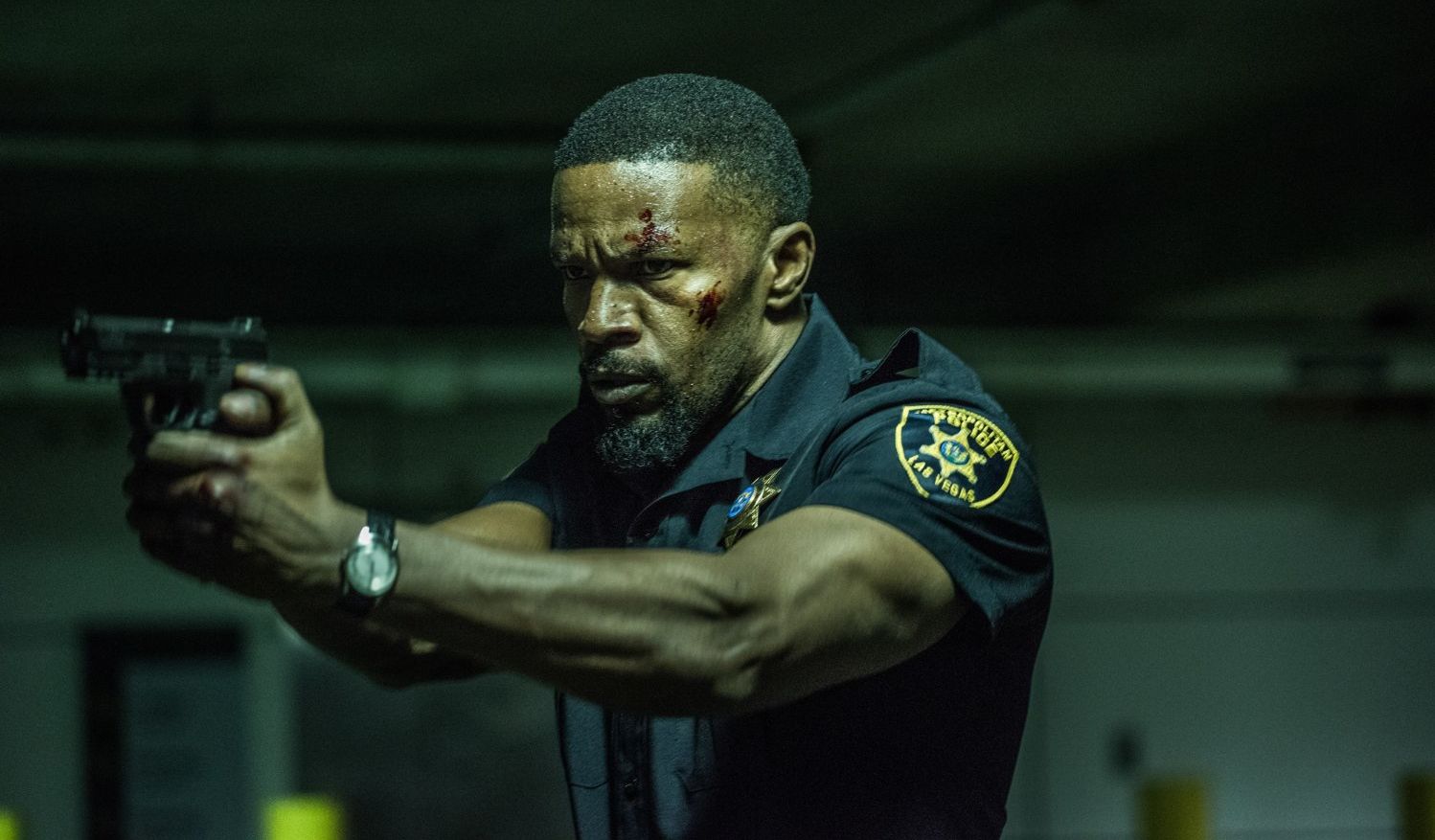 If you have the opportunity to walk into Sleepless knowing as little as possible about the French film it is based on I wholeheartedly believe you will enjoy your time at the cinema. While nothing in the feature rises much above standard shoot-em-up action fare, there is no denying the incredibly capable hands that brought the film to life. Everyone involved in this project are better than the final cut, but their contributions do help make what could be a completely forgettable feature something that is at the very least worth watching (ideally from the comfort of your own home).

Jamie Foxx stars as Vincent, an undercover Las Vegas police officer who has been keeping his work a secret from his family and friends for more than two years. At the top of the film Vincent and his corrupt partner (T.I.) make the mistake of stealing drugs from a drug dealer in a job that ends with gunfire. The ensuing investigation puts Vincent and his partner in the crosshairs of internal affairs (Michelle Monaghan, David Harbour), but before they can concern themselves too much with that problem the drug dealer from the night before kidnaps Vincent’s son (Octavius J. Johnson).

The bulk of Sleepless relies on a rather complicated web of lies and deception to propel its story forward. What should be a straightforward exchange of drugs for Vincent’s son becomes increasingly complicated as various third parties continuously move the drugs in question and/or Vincent’s son. If you step back for even a moment to contemplate the story the real criminals and their motivations are bafflingly obvious, but if you can manage to ignore that urge to think about what you’re seeing then you’re in for a fairly fun ride.

Read more: Live By Night crushes Ben Affleck under his own ego

You also shouldn’t look around too much. Not because there may be clues as to who is doing what, but because Sleepless is not a visually appealing world. The majority of the film takes place in a casino that never once feels real (it isn’t), and three quarters or more of the transitions from scene to scene employ the use of helicopter footage. There are a few (three) hand-to-hand combat sequences, each with Foxx owning his role of hero, but they are the only uniquely masterful moments amidst a sea of mediocrity.

Still, the film’s biggest fault—or perhaps its greatest accomplishment—is taking half a dozen of the best actors working today and sticking them in a narrative that gives them nothing to do. No one emotes because, for the most part, there is nothing to emote. This is a film where angry, broken people fight with equally angry, broken people over things that will bring none of them an ounce of happiness while avoiding whatever it is that actually motivates them. No one seems to know how they found themselves in this situation because none of them will take responsibility for a single thing that happens. There is no one to root for other than the innocent, and they are far too understanding.

There are scenes of tension and action when Sleepless appears to briefly become something special, but those moments are few and far between despite the film itself only lasting a little under 100 minutes. Aside from the majority of American filmgoers having never seen the movie this film is based on, I cannot think of a single reason why this project was given the green light in the first place.

If this review is the last time you even think of this film you should consider yourself fortunate. At least you won’t waste an hour and a half of your time on this planet with this miserable film about miserable people doing bad things in a world where police response time seems to average somewhere over an hour and as soon as bullets fly pedestrians are nowhere to be found.