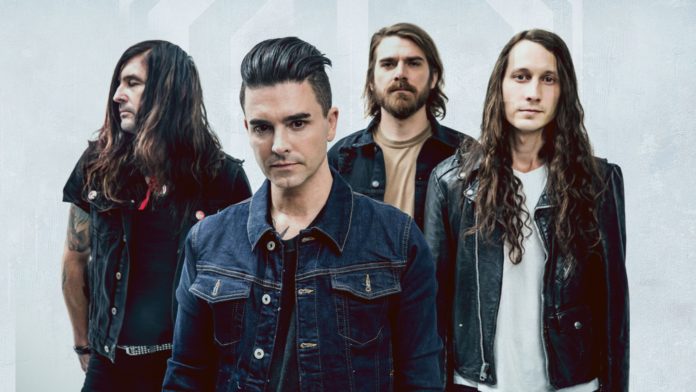 Dashboard Confessional is a band that has been around for nearly twenty years now. It’s a career that has seen them achieve things that seem crazy now for a band coming from that type of emo/pop punk scene. Three RIAA gold certified records, a hit song on a movie soundtrack, a major label deal, and a brief hiatus later: they are still around and perhaps even stronger than ever.

Carrabba and the band currently find themselves on a summer tour — with All Time Low — and that has become a bit of a routine for Dashboard since they returned as a fully-functional band in 2015. It started with the co-headlining tour with Third Eye Blind that year, 2016 they toured in the summer for the Taste of Chaos tour, and last summer they headlined a tour with All American Rejects and The Maine. In regards to their tendency to tour in the summer (mainly in outdoor settings), Carrabba states that “There is something special about playing outdoors in the summer and there’s sort of a different kind of attitude that the fan brings in with them. I guess the feeling of it all is more free spirited,” he begins. “Do our songs lend themselves to it? I guess they must because people come to see it in the summer.”

That feeling of summer: being around friends, the carelessness, and youthfulness of it all is something that we can all relate to. It’s not a feeling lost on Dashboard Confessional, as Carrabba admits they soak in the moment every chance they get. For this tour, the pairing with All Time Low might have been a bit surprising at first, but it shouldn’t be. “We have been friends for so many years, very into each other’s bands,” Carrabba mentions before mentioning that they tried to make this tour happen last summer, but things didn’t line up. “This year we both have records out at the same time, both always looking for ‘How can we get the most fun on any summer?’” The goal was another fun tour for the summer, and that’s exactly what has been delivered.

Dashboard Confessional releases their latest album, Crooked Shadows, earlier this year. It serves as the band’s first full-length album since 2009’s Alter the Ending. It’s a great feeling to have new music out, Carrabba admits, after a few years of being back and touring off of their back catalogue. His favorite part, however, of having a new record out, is using all of the new creative tools that weren’t available years ago, and applying those to some of their older songs in their live shows, to keep the songs fresh and feeling new, even after being out for years. “We’re not talking about changing them into something they aren’t, but we’re just, you know, there’s some additive properties there that make the songs — some of which we have been singing for a long time — feel new to us,” he mentions.

Despite having a record full of new material out, he admits that they are careful with not performing too many new songs live. Dashboard Confessional understand that fans are more familiar with their older songs, and it can take some time for those to get the same reception. This has nothing to do with the songs themselves, as the band is proud of Crooked Shadows very much, but instead it is based around the connection with their fans and the experience they want to provide. “You know that thing where people — where like really cool bands say they don’t want to popular songs? That’s not us. I still am just shocked by the way people have embraced these songs, and I like to share that moment with them. They get to listen to my stuff on their own all the time, I only get to be there when they listen to it a couple times a year, so I savor that moment,” Carrabba explains.

But, of the new songs they perform live, “Heart Beat Here” sticks out as a favorite for Carrabba to perform live due to the fan reaction the song gets. The song has been floating around since the Taste of Chaos tour in 2016 when Dashboard Confessional performed it live on the tour, but was not officially released until Crooked Shadows. “The way they sing the song by the first chorus, before the first chorus is even over, and they’re singing it like it’s one they’ve had in their phone for years and years,” he shares.

Carrabba also shared a story of hearing that song in his home one day before this current tour started. “I heard [‘Heart Beat Here’] on a commercial for a show on ABC the other day,” he mentions, “It’s like, when you hear it kind of out of the corner of the room, it’s like ‘That’s a good song, that’s a pretty good tune.’”

In addition to debuting “Heart Beat Here” two years ago, on their 2017 summer tour they began playing another new song called “We Fight.” It was the second unreleased — at time — song to be performed live that would ultimately wind up on Crooked Shadows. But when did the process start, exactly, for working on new material? That’s something that Carrabba admits was a temptation immediately back in 2015 when Dashboard Confessional became active again, but it was a process he purposely delayed.

“I decided I was going to take — we had already taken so many years at that point of a break — a year, year and a half before we started working on new music,” Carabba begins. “It took a lot of time to get to the starting point of what this record is. I wrote quite a lot, there’s quite a lot of songs that I had written leading up to what would be the batch that became [Crooked Shadows]. But, you know, you gotta go through that process and find my way to the territory I wanted to explore.”

All of the time off — nearly nine years — between records for Dashboard Confessional didn’t affect Carrabba’s writing process, either. “One thing that is the same is that the moments come quickly with Dashboard songs, as opposed to other bands. I’m chasing a song just as it seems to get away from me,” he mentions. This long gap between records, a well documented on at this point, is one that he believes was beneficial overall towards Dashboard. He stayed busy with other musical projects — predominantly the more folk driven Twin Forks — and everything culminated into making Crooked Shadows the album it wound up being. “I believe it did,” he states explaining on if the hiatus helped Dashboard as a band. “Who’s to say that I know for sure, but I feel like if I had rushed for any reason, I don’t think I would have gotten the songs that I really wanted.”

Crooked Shadows is an album that took a hiatus, and then some additional years, to come to fruition. Despite the antagonizing and often pain-stakingly long wait for fans, it wound up being well worth it. As it turns out, it allowed Carrabba and the band to attack the album from a new perspective, as he highlights two different angles in which the record was written. “There are two kinda through lines for this record,” he starts, “One was about the importance of taking care of each other through good times, bad times, love lost, all of that.”

The second, may come as a bit of a surprise and certainly is more of new territory for Dashboard Confessional, was something Carabba felt was a necessary topic to cover. “The other through line, which was, I think, semi political but also more social politics; standing up for what we believe in and making big noise when we think things are going in the wrong direction,” he explains.

Though Dashboard Confessional took some time off and then took their time writing a new record, there is no indication that they will be going away again any time soon. Specifically when asked about the future of Dashboard and if there was any likelihood of another break in store, Carrabba responds simply yet effectively: “I think we take enough time off.

The remaining dates of Dashboard Confessional’s tour with All Time Low can be found below.