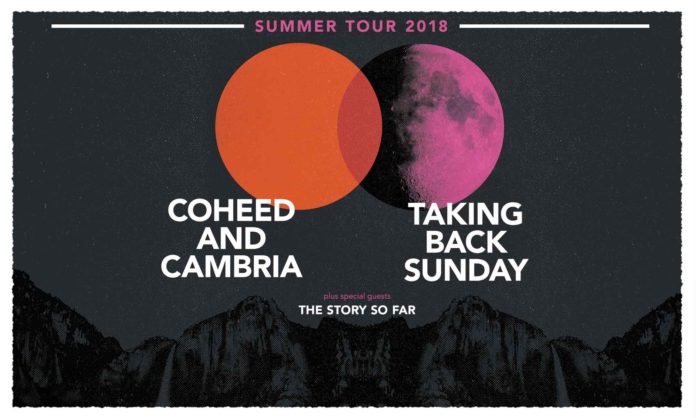 We all know that this past summer marked the final cross-country run of the Vans Warped Tour. It was a summer of celebration and nostalgia for that scene in many ways — understandably so. However, lost in the mix of that is the opportunity for many unique tours that possibly wouldn’t happen if Warped Tour stuck around. Insert: this past summer’s Coheed and Cambria, Taking Back Sunday, and The Story So Far tour.

All three of the band’s on this lineup are Warped Tour veterans; Coheed and Cambria last played in 2007, Taking Back Sunday performed one date this year (before that it had been since 2012), and The Story So Far last performed on Warped Tour in 2016. It’s no guarantee that either of these bands would have joined Warped tour again in the future, but with each of them appearing multiple times, it’s safe to say that it is more probable than not. Even outside of the bands themselves, Warped Tour ending allows for fans to be excited about these tours and seeing their favorite bands on different tours, playing more songs with longer sets.

Kicking off the show was the always reliable group, The Story So Far. The band kicked off their set with the energetic “Empty Space” and used their set time to perform as many songs as they could. The band is gearing up to release their new album, Proper Dose, on September 21st via Pure Noise Records, so naturally they played a few new tracks live — “Out of It” and “Let It Go,” which you can stream above. The band are known for their energetic songs, which transform well live, as the band rips through them and feeds off of the crowd energy. An outdoor pavilion setting is new territory for the band because — outside of Warped Tour — they usually play at indoor club venues. Then Story So Far, at this point in their career, might be more familiar with indoor club shows, but that doesn’t mean they didn’t make the most out of their set. In addition, they threw in a cover of Led Zeppelin’s “Black Dog” which was a nice surprise, one that went over much better and that the band pulled off incredible well.

Second up on the night was Taking Back Sunday, who have toured constantly as a band since their inception in 1999. Earlier in their career, the band had numerous lineup changes, but since 2010 their lineup has stayed the same (minus the recent departure of founding guitarist Eddie Reyes), and that’s something that shows more so than ever in their live shows. There’s the classic mic swinging from vocalist Adam Lazzarra that everyone has come to expect from their live shows, but the musicianship also has consistently grown throughout their career. This is reflected not only in their music, as their musical growth from album-to-album remains undeniable, but their live shows benefit from this, as well. Guitarist/vocalist John Nolan and touring guitarist/backing vocalist Nathan Cogan compliment each other well, with bassist Shaun Cooper and drummer Mark O’Connell rounding out their impressive live show.

Taking Back Sunday was co-headlining the tour with Coheed and Cambria, meaning they were essentially given the same length of set a headliner would get. This is almost necessary for them, at they have seven full-length albums under their belt, and a string of hits and fan favorites, as well as their own personal favorite songs to play live. This includes their ever popular songs “Cute Without the ‘E’ (Cut From the Team),” “You’re So Last Summer,” and “MakeDamnSure,” while they sprinkled in tracks from 2016’s Tidal Wave — “All Excess,” “You Can’t Look Back,” and the title-track — and even have mixed in the under-appreciated “Set Phasers to Stun” from 2004’s Where You Want to Be.

All in all, Taking Back Sunday did a great job with their set — mixing in songs from all across their discography — and performed with tight musicianship and great crowd engagement all throughout. About halfway through their set it started raining, but no one in the crowd seemed to care too much. If anything, it only added to the experience for everyone there, giving them another memorable layer of this concert going experience.

Prog-rocking veterans Coheed and Cambria were up after Taking Back Sunday to close out the set. Coheed has been one of the more consistent bands in the music community since their inception in 1995, and much like Taking Back Sunday their live shows have only consistently gotten better. Similar to The Story So Far, they are also releasing a new album this fall: Vaxis – Act I: The Unheavenly Creatures, due out October 5th on Roadrunner Records. The band’s live show is very different than Taking Back Sunday, and instead s a little more similar to The Story So Far’s in that they spend most of their set blistering through their songs and not much time for breaks, other than guitar changes and such. Not only that, but the band relies heavily on their light show to take you into a completely different world, and it works masterfully.

Ultimately, they cover all of their bases in terms of covering music from their various releases, closing out their set with their biggest song, “Welcome Home.” The rain re-appeared during their set, adding another atmospheric layer to their set, closing out the show in style.

The atmosphere throughout the show was one of what you’d expect from an outdoor show in the summer. There was energy all night from the packed crowd, and it was palpable through all three sets. Warped Tour might be ending, but if that opens the gate for more tours like the one that Coheed and Cambria, Taking Back Sunday, and The Story So Far were able to put together, then we won’t be missing much for long.