There’s something undeniably free about the way Eric Nally moves his body when performing. Whether on stage or in a music video, he seems unrestricted by normal conventions of how to move about and while his eccentricity is hard to pin down, there’s no denying that he’s entirely himself. His latest video for the brand new single “Spirits” is no different: with a refrain of “Do what you want / With who you love”, there’s no doubt Nally is embracing that mantra for himself.

From a close-up of his bright red slip-on shoes sliding over the strings of a bass guitar to  frenetic running in place and rolling on the floor, sometimes Nally’s moves seem to be a literal interpretation of the lyrics but often it’s just an expression of how he feels. “Spirits” also features close-up shots of Nally’s face (which is painted bright red) in the center of a rose, though the effect of the flower is more peculiar than romantic. Whether swinging his bass around his body or holding oddly still, he and his band follow the notion to “shake, shake crazy / shake it all night” in their own individual ways.

“Spirits” is now available on iTunes, Apple Music, and Spotify. Eric Nally hasn’t announced any touring plans for 2018, but we’ll be sure to let you know if he does: his live show is not to be missed. Make sure you’re following Substream on Twitter so you’re up to date on all things Eric Nally.

If you want more of Eric Nally and his signature moves, check out a live video of “Black”, below. 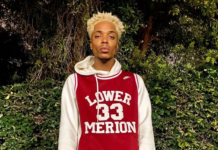 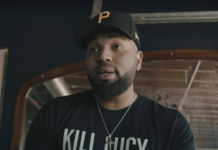