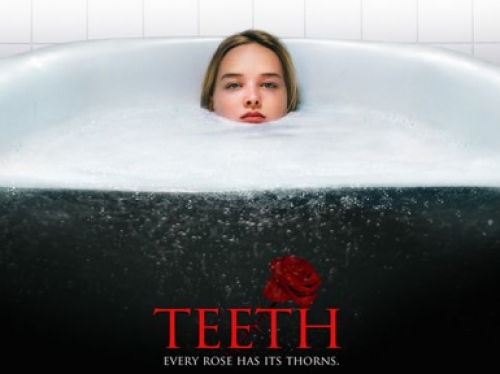 Horror movies have a way of sticking with their audience. Generally speaking, this is achieved by creating either a tense environment that leaves you paranoid or creating a gruesome experience that leaves you feeling utterly disgusted. Few movies are able to successfully create a gruesome experience and combine it with elements of black comedy. Needless to say, the experience you get while watching a movie like Mitchell Lichtenstein’s Teeth is one you don’t feel every day. Few films are able to make you wince from a male’s worst nightmare, and then chuckle a little at the thing you were just wincing about within an 88 minute time-frame. With a very original storyline to boot, Teeth gives a very unique movie-going experience for the month of October, best viewed in a group setting.

Our protagonist Dawn O’Keefe, like all teenagers, struggles with hormonal changes and sexual urges at school. She’s a spokesperson for a Christian abstinence group called The Promise and speaks of how one’s virginity is the most precious gift you have; it should be only given to your true love after marriage. However, there’s an aspect about Dawn’s anatomy that throws a curveball in the normal transitions that teens go through. Dawn possesses something referred to as vagina dentata, which is a fancy way of saying she has teeth in her vagina. Since Dawn is abstinent, this shouldn’t be an issue despite all of the hormones floating around. But come on, you should know by now that some sort of conflict has to exist.

During one of her speeches, Dawn locks eyes with Tobey, who seemingly have an instant connection with her. They begin spending more time together in a group, and Dawn begins to have fantasies of marrying Tobey. Despite their strong feelings for one another, Dawn remains devout and stays pure, resisting the temptation for sexual advances. Dawn even tries cutting off ties with Tobey altogether, as to resist any shred of sexual tension between the two.

However, the tension becomes too strong, and they get together at a local swimming hole one-on-one. The interaction between the two begins innocently but naturally starts to escalate when the two sit in a cave behind the waterfall. When Dawn starts to feel uncomfortable with the situation at hand, Tobey becomes too aggressive with his urges, not letting Dawn leave. Tobey starts attempting to rape Dawn. Not knowing of Dawn’s condition, and Dawn herself a bit unaware of what power she truly possesses, the vagina dentata claims its first victim.

What Teeth does particularly well is making the events of male castration oddly satisfying. Most of the male characters throughout the film are deceiving individuals who will go to any extreme lengths just to fulfill their sexual desires. Therefore, the fate of these horndogs makes what should be a disturbing conclusion one of laughable proportions. Dawn feels most like the victim throughout the film, causing the fate of the teenagers’ manhood to feel like a small victory.

Teeth is one of those few movies that can toe the line between satire and a B-rated horror movie to create a very unique movie-going experience. The various scenarios and blatant sexually referenced t-shirts Dawn wears in the first half are so tongue-in-cheek it’s laughable, but in the best way possible. Teeth isn’t your typical keep-you-up-at-night horror flick by any means, but it’s one that puts some gruesome images before you that you simply can’t un-see. The sexual scenes involving castration are as graphic as you can possibly picture, and they will make any male wince in empathy, while any female smirks a subtle smile of satisfaction given the degree these men will go for a little action.