Advertisement
Home News The Academic share emotional new single “Aftertaste”
Share on Facebook
Tweet on Twitter
Irish alt-rock quartet The Academic have released their new 80s-influenced track “Aftertaste.” The song is an infectious indie-pop endeavor with shimmering production and tangible emotion as frontman Craig Fitzgerald looks back at the mistakes made in a relationship.
Fitzgerald says, “When it came to ‘Aftertaste’ it was a lot different to how we worked before. From a production standpoint, we were a lot more involved. Sometimes there is a preconceived notion out there that if you are a guitar band, you should be in a particular lane. Our mindset when writing is less defined by what the stereotype of an indie band should sound like and is more about letting our songs become the best they can be.”
The track gives a first look at a new chapter of music for The Academic. Following the success of their 2018 debut Tales From The Backseat, the band has shared the stage with headliners including Twenty One Pilots, The Strokes, and Cage The Elephant.
Check out “Aftertaste” here: 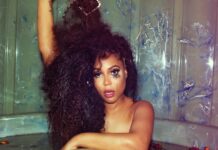