The Flaming Lips have announced their plans for a twelve-date summer headlining tour. The band will be bringing out The Claypool Lennon Delirium and Particle Kid as support.

The tour will be in support of their new album, King’s Mouth: Music and Songs — which The Flaming Lips have previously announced to be released on July 19th via Warner Bros. Records.

Special VIP packages will also be available for those who want the ultimate experience with The Flaming Lips. This is set to include early access to the venue, so fans can be part of the pre-show warm up on stage during soundcheck for a few songs. Members of The Flaming Lips will then spend some time for an intimate meet and greet before fans have the chance to grab the best seats in the house close to the stage or be first at the merch booth before the rest of the crowd enters the venue. 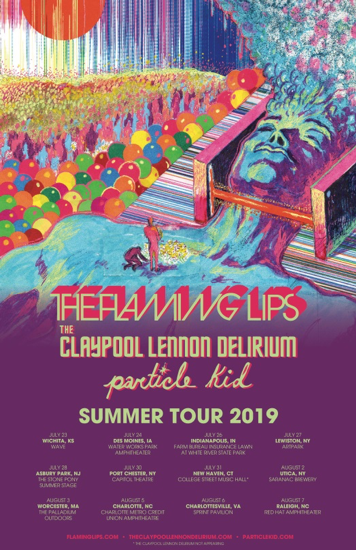