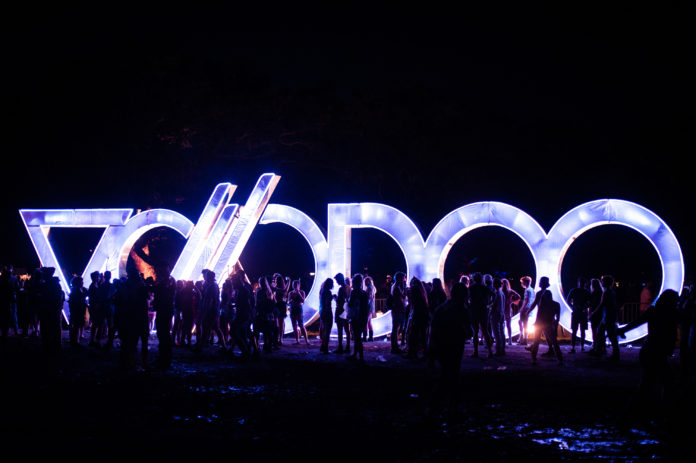 City Park nestled in the Mid-City area of New Orleans, hosted the 20th anniversary of Voodoo Music + Arts Experience on October 26-28th and it was a wet and muddy weekend to say the least. However, the rain and mud couldn’t keep fans from making the trek from all across the country to The Big Easy, and who could blame them? Good music, great food and the unique culture that New Orleans has to offer provides an irresistible siren call that people feel compelled to answer.

Fans were able to start entering City Park on Friday afternoon and they had their choice of any one of four stages as well as the Toyota Den Music Tent where fans could experience a more intimate setting with artists. There seemed to be a stage for every music taste. Jazz, rock, hip hop, metal, electronic, and indie rock notes filled the air. Friday’s bigger names included Third Eye Blind, The Revivalists, Mumford and Sons, and Zeds Dead.

By Saturday the mud was still prevalent but festival attendees got creative by adding mud boots to their Halloween costume attire. Some notable acts from the second day included indie rock band Wallows, who attracted a bevy of loud screaming girls to their set, LA based punk rockers Starcrawler, award winning R&B songstress and actress Janelle Monae, metal icon Marilyn Manson and Travis Scott filling in for the last minute cancellation of Childish Gambino.

The weather was beautiful for the final day of Voodoo Fest and the mud pits dried considerably overnight. A surprisingly large crowd showed up for the enigmatic Poppy. Her hypnotic set included a virtual programming intro sequence stating, “You will pledge your allegiance to Poppy. You will do anything Poppy says.” which the crowd went crazy for. Other noteworthy acts included Tinashe, Judah and the Lion, Modest Mouse, 21 Savage and closing out the last day of the festival was UK based rock band, Arctic Monkeys.

Voodoo Music + Arts  Experience is an embodiment of everything that is New Orleans. It goes beyond an experience and immerses its attendees in the lifestyle that is the city, even if it’s just for three days. Music, art, food and interesting and eclectic people from all over the country are what make this festival special. Celebrating its 20th anniversary is a testament to how much this festival resonates with its fans year after year.