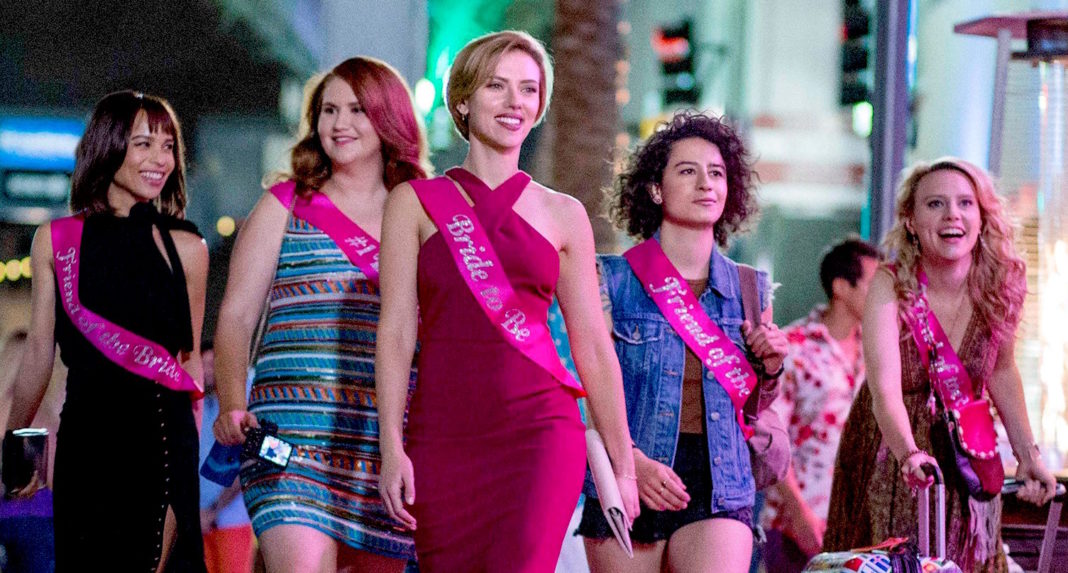 Rough Night is a movie that I really, really wanted to transcend the premise that was presented in the trailers. In a culture that already dehumanizes sex workers through objectification and by turning a blind eye to the violence visited upon them, it seems like a pretty tasteless move to build a movie around a privileged cast of characters accidentally killing a stripper and then comically attempting to dispose of the body. The hook of Rough Night, of course, is that the genders of the players are reversed from what you would normally expect from a farce like this, with privileged women in the protagonist roles and a male stripper as a corpse prop. There’s lots of potential for subversion in that set-up, and with a writing team pulled from the hilarious Broad City (Paul W. Downs and Lucia Aniello, who also directs) it seemed like this might not be just another tone deaf attempt to wallpaper women into a problematic trope without further examination. Unfortunately, that is exactly what happened.

Jillian Bell, Zoë Kravitz, Ilana Glazer, and Kate McKinnon play BFFs to Scarlett Johansson, who is unwinding from her stressful campaign for mayor by engaging in a bachelorette party down in Miami with said besties. In their night out on the town, they do some cocaine and tensions start to rise as members of the group compete for one another’s affections, and that’s where the Craigslist-ordered stripper (Ryan Cooper) comes in. As the dancing gets heated, the women accidentally inflict a fatal head wound on the stripper, and supposed hilarity ensues as they figure out how to dispose of the body without getting caught.

The main problem with Rough Night is tonal, as it attempts to spin the dark reality of these women having killed a guy and trying to cover it up as an intrinsically comical situation, but the fact of the matter is that the movie’s tone doesn’t match the gravity of what it portrays. The humor floats around as light and bubbly character work that is meant to evoke empathy and encourage a feeling of camaraderie between these women and the audience, but those jokes don’t work when placed in such stark contrast to the dead body of a stripper occupying the same space. If the film portrayed its protagonists as comically flawed people that we were meant to laugh at, rather than with, more jokes would stick the landing because the script’s sympathies would deservedly be with the dead guy, not with the clearly guilty women whom we’re supposed to like just because they’re such nice people.

But even putting the uncomfortable implications of the premise aside, Rough Night is rather hit and miss with its delivery. Glazer and McKinnon are comic highlights, as is a B-plot involving the bride-to-be’s fiancé (played by Downs) driving across the country to declare his undying love after he mistakenly believes their wedding to be in jeopardy. However, Bell is a pretty stock-standard clingy best friend archetype, and though Johansson’s character is designed to be a wet blanket, acting the straight-woman is not among Johansson’s gifts. Kravitz gets the shortest end of the stick, though, as her character seems to exist solely to (a) provide a love interest for Glazer’s unapologetically queer character—which, don’t get me wrong, is a positive—and (b) to be molested by the creepy swinger next door neighbors (Ty Burrell and Demi Moore) in a scene that is meant to be played for laughs but comes across as disturbingly nonconsensual.

So in case it wasn’t apparent, I really didn’t care for Rough Night. It has its moments, to be sure, and I won’t pretend that I didn’t laugh at some of the better jokes at play. However, the tonal disconnect between what the film wants to be and the subject matter it portrays is jarring at best and completely disregards the explicit dehumanization of its chief comedic prop at worst. The movie is at its best when it cracks jokes completely divorced from its premise, and even then it only works some of the time. If the Broad City pedigrees of Downs and Aniello are what have you sitting on the fence for this one, I regret to inform you that they tipped this movie to the wrong side of that fence, and it’s best that you don’t jump after them.