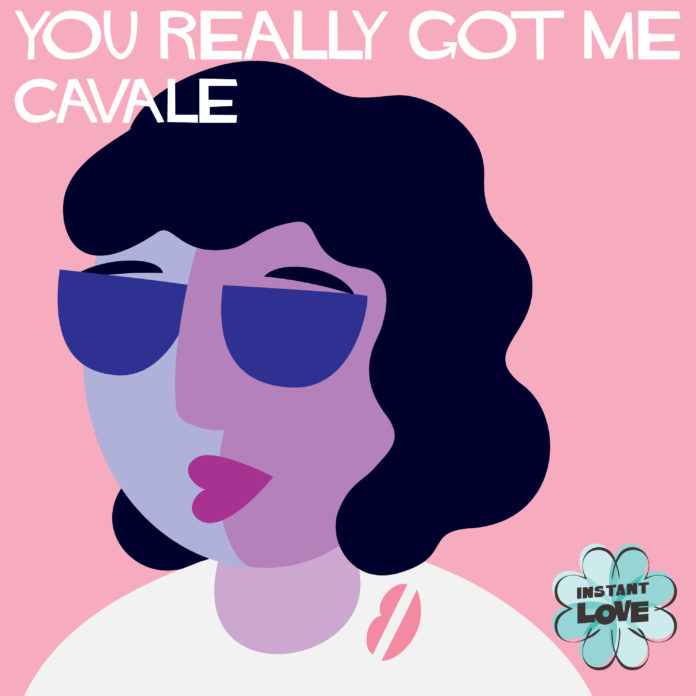 Men have written songs about women for years. But what happens when the tables turn and those classic love songs sung by men to women are taken from another perspective? The result is Instant Love, a project curated by Instant Records that takes love songs and reimagines them to be about strong female relationships. The song series launched on International Women’s Day and has since continued to produce a new release every few weeks (Stream the previous song releases here).

Today, we are excited to bring you the premiere of Cavale’s Instant Love cover of The Kinks’ “You Really Got Me.” In it’s original form, the song is upbeat and rockin. Cavale’s take on the classic hit keeps the pace up, but introduces modern synths and her own personal spin, with both powerful and subdued vocals. It will be available for purchase tomorrow here.

Instant Love also just launched a new interactive website featuring songs, stories and videos from the artists participating in the project. The site also allows for interested parties to upload their own unique covers.

We caught up with Zatarain to get more insight to the project, why it was started and how it’s progressed since the launch.

The songs have been rolling out for a while now. How has the response been since starting the project? Have you seen an increase in interest of people wanting to get involved?

Zatarain: Yes, we’re getting approached by both men and women to work on this project. I love that men understand it too, and they’re excited to produce and play music on the tracks. For example, Sune Rose Wagner from The Raveonettes produced “Don’t Worry Baby,” Benjamin Walding helped produce “You Really Got Me,” and The Running Lights produced “Something” which is out in July and even recommended the singer Hunter. And in general, Instant Records is getting more solicitations from bands, which is always a fun email. I remember being on the other side of that in my twenties, so I read each and every one.

What I love about Instant Love is that it’s a journey. We’re still uncovering nuances of the project. So we’re not only educating potential collaborators, but ourselves as well. Whether the angle is gender, love, appreciating classic songs, or girl power, there’s something for everyone. And more recently, I’ve discovered the angle of “self-love” in women. I’ve personally felt more peace and confidence open up inside of me hearing a love song sung by a woman to a woman as a woman. And we’re even toying with the idea of recording a song that talks about “being your man” (it’s secret for now!) and I love that idea too – playing with common expressions from the female voice, yearning to fill a place in someone’s heart.

Was there any certain event that sparked the idea for the series?

Zatarain: Instant Love was a perfect storm of inspiration. The more film and television I watched about female relationships across the sexual spectrum, the more I realized music wasn’t on the bandwagon yet. I also fell in love with my baby niece Highland and wanted songs to express my love to her. And quite frankly I was singing “Oh, Pretty Woman” in the shower and imagined a cool girl singing it, unafraid of what people would think, expressing longing for a beautiful lady on the street. And I thought – BAM – that’s a cool idea. Still waiting for that song to get recorded though… Perhaps we’ll get a video from our new community web site which has a section just for sending us performance videos!

How did you go about finding artists for this project?

Zatarain: In the beginning, label founder Richard Gottehrer and I approached all the artists we personally know or love. We needed to establish a level of trust to launch this idea. And as the series progresses, we are getting quite adventurous, approaching artists from all around the world that have a clear and unique voice. The voice is the most important factor when choosing an artist as this narrator shift is what catches your attention. And then a close second is of course the production, and we’re lucky to have Richard in the driver’s seat behind every final mix as he’s got decades of experience and so many hits under his belt.

What’s been the most rewarding part of the Instant Love series?

Zatarain: For me the most rewarding aspect is feeling like I’m doing something good. Working in music is obviously extremely fun and has been a lifelong ambition of mine. But going beyond that and giving something positive to the world has given me the most joy. I hope we reach girls coming of age and exploring their feelings about girls and boys. I hope we remind girls the power of sisterhood with their friends, sisters, and mothers. I’m aware that music is this magical form of communication between our souls. Melodies and lyrics get under our skin for a lifetime. And I consider that a great responsibility from the creator’s side.

A close second is the opportunity to meet great artists from around the world and their management and label teams. People are getting involved because they believe in the project, so we’re meeting some great folks.

Were you able to pick the song you wanted to cover? If so, what drew you to “You Really Got Me”? If not, did you find the song fit your style naturally or did it take some time to find how you could work your creativity into it?

Cavale: Initially I was toying with the idea of doing Santana’s “Black Magic Woman”, which is such a fun, sexy song–but the lyrics didn’t leave much room for interpretation where this project is concerned. “You Really Got Me” kept tugging at me. Growing up I was a real punk; I have a deep respect for early punk music especially. After hours (days honestly) of scouring the internet for the right song–The Kinks just felt right. They have both an innocence and an edge that I am drawn to. I’ve been working with Brooklyn producer, Kindergartner, and at first we tried making a more derivative version of the song, which, while appealing to my teenage punk sensibilities, didn’t feel sincere with the music that I’m making now. When we finally approached it like a Cavale song, that’s when the fireworks kind of started going off.

Did you approach this song arrangement any differently than if you were creating a song of your own?

Cavale: For sure–It took us almost a month of crafting different iterations of this song before we realized that a woman doesn’t generally just yell “YOU REALLY GOT ME”, she’s sexier, more demure. When a woman really wants you, there is so much more happening beneath the conversation beyond what’s actually being said. We have a ton of respect for The Kinks obviously and we wanted to maintain that classic riff but in a more updated; compelling way. So with that in mind, we started piecing it together as something that was more mine.

What has been the most exciting part of being involved with Instant Love?

Cavale: When I was approached by Allison about this project, I thought it was such an awesome idea. I was immediately transported to when I used to cover Bob Dylan’s “Girl from the North Country” back when I would perform with the band Tumbleweed Company and it gave me such inexplicable but profound joy. It felt coquettish and honest. Being a woman addressing another woman–it makes a song feel completely new. My favorite part of this process was singing “girl” with playfulness and conviction and knowing that there are so many ways to interpret it.