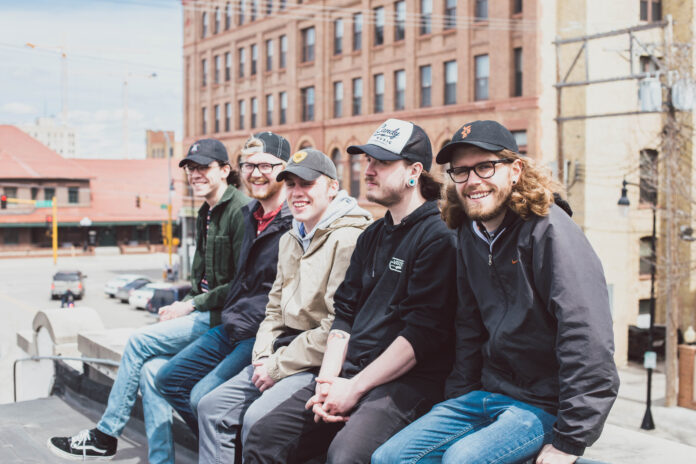 Based out of the Fargo-Moorhead Red River Valley, High Hopes is alternative/punk band that look to release music that matches the energy in which they play with. With heavy influences in pop-punk, their sound resembles that of The Wonder Years and Knuckle Puck, fans of that 2010’s era of pop-punk should be happy with High Hopes.

High Hopes — consisting of Leighton Falk, Jack Stenerson, Justin Hatcher, David Strickland, and Curtis Hamende — started out back in the fall of 2013 with the release of their debut album, Seasons, which produced the single “Wake Up,” that received some attention on a national scale. Their second release came in 2014 with their EP, Irony’s Got the Best of Me, which featured the late Tim Landers (Transit, Misser) on the song “Time Well Spent.”

After heavy touring across the Midwest and East Coast, High Hopes settled in to release their next EP, Plain to See, in 2016 and featured the single “Collapse,” which has become a staple in their live shows. Most recently, the melodic pop-punk band released the Transparent EP on September 11th via Third String Records, their first since Plain to See. The EP showed tremendous growth and maturity for the band, giving fans a glimpse into the future of High Hopes.

Transparent featured their song “Spun,” which Substream is excited to be partnering with High Hopes to exclusively premiere the video for the single.

“The second we heard the finished version in the studio, we knew “Spun” was going to be our first single. The song went through such a transformation in the writing and recording process, we knew it was the perfect encapsulation of our sound,” Stenerson tells Substream. “For this video we knew we wanted something bright and memorable. We were lucky enough to find this location up in the trees and we think it is the perfect backdrop. It was filmed in the height of the pandemic so we fell lucky it was even able to happen.”