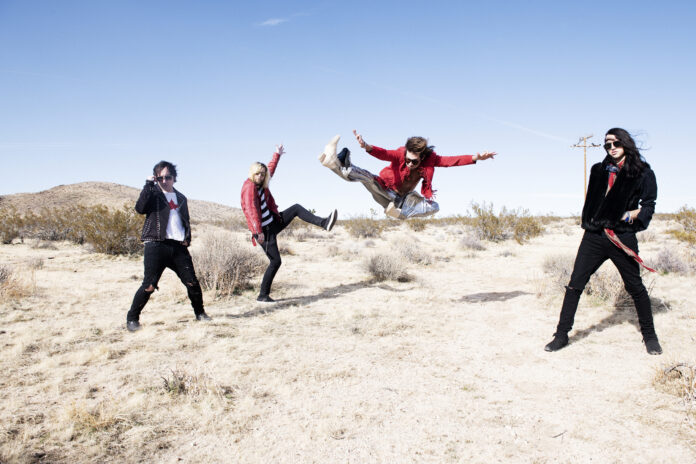 In an age when music feels safer than ever, Moon Fever exists to remind us of rock’s unbreakable spirit.

Moon Fever is a product of the digital age, but their sound is timeless. The band — vocalist Cody Jasper, guitarist Mitch Micoley, guitarist Joe Perez, bassist Gabe Maska, and drummer Greg Garcia — began over the internet. Despite living in different cities, the members forged a connection through their shared love of rock that is poised to take the world by storm in the years ahead. Their latest single, “Casanova,” speaks to their huge potential in a manner few rock songs can.

You may be too young to remember this, but rock and roll used to be dangerous. Before Billie Eilish bled black blood from her eyes and decades before Tyler The Creator ate a cockroach, rock musicians laid the foundation for lawless creative expression that artists still leveraging for personal gain. Led Zeppelin and The Rolling Stones were among the first to create and brand on terms they set, but it was the rock artists of the 1980s that made pushing the envelope a means of doing business. Motley Crue, Guns N Roses, and other now-iconic acts were loved for their music as much as their presentation, and their willingness to do seemingly anything to entertain cultivated a thriving community of fans that continue to support those artists today.

“Casanova” finds Moon Fever harnessing that same unpredictable energy and channeling it into a song that demands interaction. With driving drums and a riff that just won’t quit, the song plays like the soundtrack for a late-night cruise down the Sunset Strip with the windows down to your favorite bar. As the track builds, listeners are transported to a crowded club where concertgoers are moving and shaking under bright lights. It’s the kind of scene where you can sense the sweat on the walls and feel the overpriced drinks hit your system at the perfect time to cut loose alongside your closest friends. Only good vibes exist in this space, and Moon Fever is making it available to you on-demand as long as you have access to music.

Of course, creating music that takes people places they long to be is nothing new to Moon Fever. The band’s debut single, “Fever,” arrived in February with similar energy. The track vividly depicts breaking free of societal shackles for rock and roll dreams. Metaphors of a runaway romance and the relentless pursuit of dreams detail how the band feels they have no other choice than to write the best songs possible. For them, rock is not just a lifestyle, but a way of life. You don’t have to understand it, but they’re going to make damn sure you respect it.

The current state of the world is preventing Moon Fever from sharing their songs with a live audience, but one can already imagine the good times they will deliver when concerts return. Their music can cure your depression and adjust your vision of the future. Moon Fever reminds us that we don’t have to live by anyone’s rules other than those we set for ourselves. Anything is achievable as long as you’re willing to commit, and these guys are all in on spreading the glory of rock and roll until the wheels fall off.