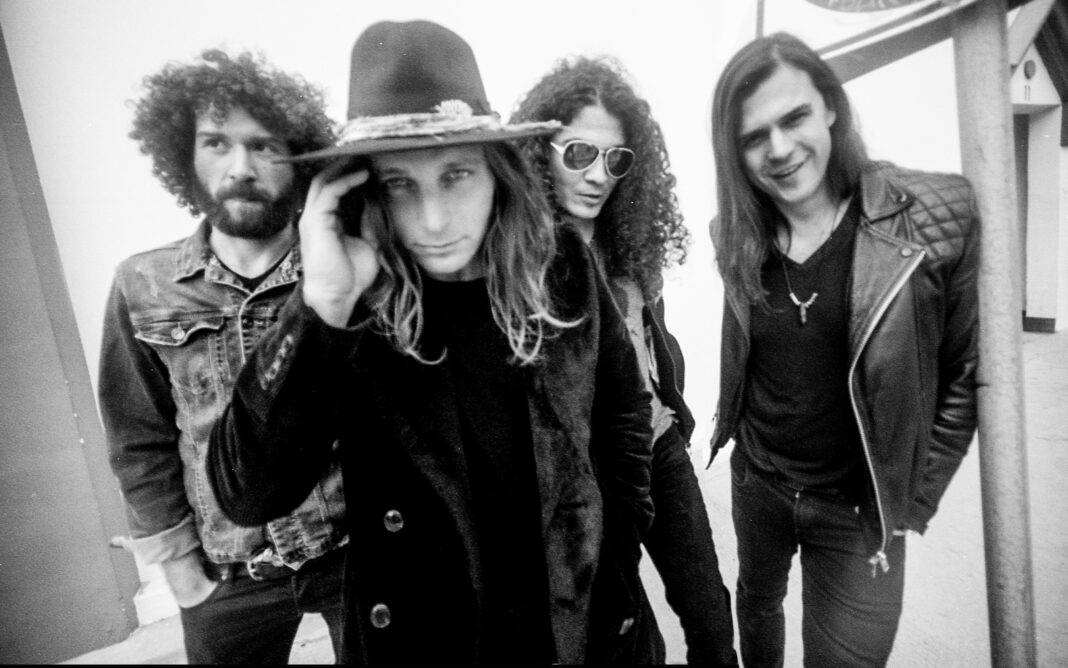 If you’re looking for a resurgence in rock music, you might be getting it finally. In a mainstream world that has been largely dominated by EDM, hip-hop, and the never-fading genre of country music, rock music is due for it’s time to shine. You can see it all around you if you’re looking — Led Zeppelin shirts being sold everywhere, same with The Who, The Rolling Stones, and so forth. Greta Van Fleet has lead the way on its resurgence, with an RIAA-certified Gold EP (2017’s From the Fires), and four #1 singles on the mainstream rock charts.

But there’s another band you should be aware of that is already quickly making a name for themselves: Dirty Honey.

In the midst of their tour with Alter Bridge and Skillet, Substream was able to catch up with Dirty Honey vocalist Marc LaBelle and reflect on their story thus far. We reflect on their beginnings as a band, which LaBelle describes as “very organic,” with him moving out to Los Angeles and meeting John Notto (guitarist), which lead to a self-described domino effect in meeting the the rest of the guys: bassist Justin Smolian and drummer Corey Coverstone.

When LaBelle mentions that Dirty Honey decided to officially form after their second show, I ask him if he happens to remember their first gig. He describes it as a cover gig at a bar, before going on to highlight their second show in further detail. “We were playing on the sidewalk on Sunset Boulevard, with a PA on the sidewalk, and there were like 100 people on the sidewalk,” he begins. “It was a very cool experience and we all just kinda looked at each other and like, ‘This is fate,’ and now we’re here.”

It’s been quite the ride for Dirty Honey, as you might expect for a band that’s been rising as fast as they have. When looking back on their career thus far — opening for Guns N’ Roses, The Who, Slash, a #1 single — LaBelle explains how grateful they are. “It’s been really interesting. More than anything, it’s been nice to see everybody embracing rock n roll. It’s what I love, it’s what I grew up on. It’s rock n roll, not metal, not pop. It’s soulful rock. It’s interesting to see it coming back around.”

They’re happy to be a part of the ride that is the resurgence in that 70’s and 80’s driven rock music. They wear these influences proudly on their sleeves and let it play loudly through their music — just with a modern twist. Each member brings in something: ranging from Aerosmith to Guns N’ Roses to Queen to Led Zeppelin to Van Halen and everything in between. Explaining the benefit, LaBelle states it “Helps create something familiar yet very fresh at the same time. Those similarities are something you can point to and say, ‘Oh, this sounds like this.’ I think it lends to giving people rock n roll that sounds fresh. We’re very proud of it. We think it came in well and we need to get back in work on more. Every band that I’ve loved has had some element of that. You can hear them, but it’s fresher.” They aren’t remotely ashamed of it — and why should they be? That time period is often looked back on as one of the best times in the genre, and its due for an updating.

Dirty Honey released their debut, self-titled EP earlier this year, and they’re about as happy with it as they could be. “I think the focus to release something that was undeniably great. No filler, no throwaway songs. We achieved that. We’re really happy with the outcome,” LaBelle shares with me. He goes on to share the story of when they posted their EP online for the first time, and eight hours later they were being played on the radio in Los Angeles. He mentioned Dirty Honey was on their way to a show in Missouri, and so they only found out via texts and calls from friends and family celebrating the exciting news. “It’s great how excited people are about rock n roll. It’s good to finally release something and find that people are accepting it and enjoying it,” LaBelle says.

This kind of success is one that’s as exciting as it is unusual. Although the internet has made it a little easier for bands to get their music in front of an audience, radio play is hard to come by. LaBelle and I go back and forth on some artists with similar successes — Post Malone, Chris Stapleton come to mind — and discuss the good and bad that comes with this ease of access for music. “People can put something up and it can catch on really quick, or it can be a slow burn,” LaBelle says, referencing the harsh reality that if you don’t blow up quickly, sometimes it can take a little bit longer. “We’re grateful for the opportunity to have a voice,” he shares.

Their debut single, “When I’m Gone” just hit #1 on on rock radio, making them the first new band to do so in 2019. “It’s insane for an unsigned band to be doing this stuff, it’s pretty impressive,” LaBelle says. He’s humble about it, admirably expressing their gratitude and gratefulness more than once. You can tell it’s honest, and they’re more than ready to take this opportunity and help carry the flag for the resurgence of rock music. But, that wasn’t the only major accomplishment for Dirty Honey that has him LaBelle excited: their debut EP just got a physical release. “That was a special day to get those boxes of vinyl at the studio and open it up and put it on for the first time,” he begins, “It’s interesting. It feels real. We put the vinyl for sale online and sales went crazy that first day. We could barely keep up.” It was one that felt surreal, and after a quick joke about wondering what it would be like to sell a million records back in the day, LaBelle is always appreciative of their successes.

Part of that vinyl release for their debut EP comes a new song, “Break You.” It’s one that LaBelle describes as “a rocker” and “fuckin’ bad ass,” and upon listening — he’s right. Not that my affirmation is particularly required, but it’s a great song and one that follows up their debut EP. He confirms to me that it did come from the same recording session as their EP, but is also sure it can stand on it’s own as the bridge to what’s next. “I think we wanted to bridge the gap between the first release and the next one. We’re really confident in the jam,” he says. He also teases that there are other unreleased songs from that recording session that “may or may not” ever see the light of day.

After their tour with Alter Bridge and Skillet wraps up, Dirty Honey will be heading out on their very first headlining tour. It’s an ambitious effort given they’ve only got one EP out, but LaBelle knows they can fill out a 45-50 minute headlining set, even if it means throwing in a cover song. He references a few prior headlining one-off shows they’ve done, in which everyone knows all the words and they hangout afterwards selling merchandise and meeting everyone that sticks around. “It’s a really passionate feel, they know every word and every song. It’s really fun when you get to the youngsters who fuckin’ rock n roll,” he says explaining the feeling of the shows. “You can tell our generation hasn’t had that, they’ve had like an EDM world, [and] now there’s some raw rock n roll energy [being put] out there, and people are really responding to it.”

After seeing their show as an opening act, you can tell they’re ready for their own big stage and long set. They’ve got the energy, sound, and honesty to make it worth your time. The resurgence of that rock and roll genre is now, and Dirty Honey is ready to lead the charge.