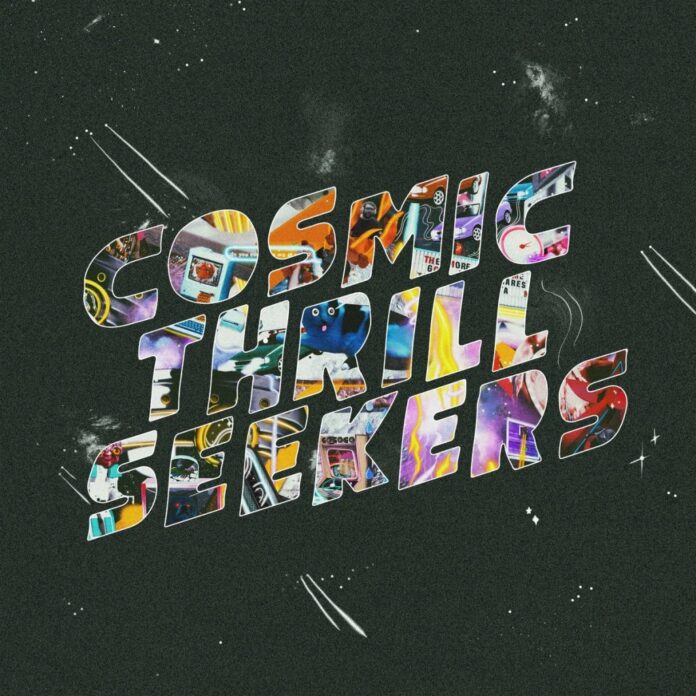 Three years have passed since the release of Prince Daddy & The Hyena’s first full-length record, I Thought You Didn’t Even Like Leaving. That collection of songs did a solid job building off of the foundation laid by their previously released Adult Summers EP and showcased a band that was onto something special by effortlessly marrying the worlds of pop music and the throaty, anxiety-fueled punk stylings of bands like Polar Bear Club and The Swellers. There was so much promise baked into tracks like “Pop Song”, “Broc Ched”, and “Clever Girl”, but none of them were indicative of what the band is putting out now. Yes, I Thought You Didn’t Even Like Leaving was their first record, but Cosmic Thrill Seekers is the true debut album from Albany’s shred-pop masterminds, Prince Daddy & The Hyena.

On paper, there’s absolutely no way that a rock opera about space travel, mental health, the Wizard of Oz, and Albany should work. Yet, here we are. Faced with what is unarguably the best record of the year, and if I’m being honest, probably my favorite record of the last five. The reality of it is that Prince Daddy & The Hyena have created something much bigger than the earthly music of their peers. It’s a grand, sweeping narrative that ebbs and flows like the waves of real life — sometimes you’re bobbing carelessly with the tide and sometimes you’re held just beneath the surface by the relentless pressure of the next big wave, but it comes goes in patterns. The ride is learning how to cope.

The album opens deceptively meek, with nothing more than the strum of an acoustic guitar and broken piano introducing us to “I Lost My Life.” Kory’s roaring vocals pierce through this faux serenity with vigor and the track builds as the two contrasting forces find a way to coexist. Musically, the track is a relentless crescendo; everything is constantly building until the track’s standout lyric, and mission state for Cosmic Thrill Seekers, open the floodgates. As if the power of the lyric “Everything will be alright if you shake the end of the world vibes” wasn’t enough, the song begins to crash all around him. Every layer is crumbling to the ground and his vocals go from singing to anxiety-ridden, throat destroying screams in which he delivers a cathartic “I’ve got some shit that I’d like to say but I can’t open my mouth/I can’t open my mouth/I’ve got some shit that I’d like to do/but I can’t move from the couch/Can’t get up from this couch.”

[Kory] Gregory has talked about how the inspiration for this song came as the result of a bad acid trip, but these lyrics hit on more than just that. They speak to the debilitating nature of anxiety and depression — you feel like there’s no point in speaking because what if nobody’s listening, or worse, they don’t care to hear it. You can’t move because you’re held in place by the weight of all the dread that comes with it all. This spills right through into the whole of “Fuckin A.” From the moment that I first heard this song, I’ve been singing it’s praise to anyone that would listen. I could cite any number of lyrics that connect this song to the first, but the lines that resonate with my own personal experience with depression are: “I hope you’re down for Nick-at-Nite bullshit when we try to sleep/cos I know that these 2pm mornings are still after me.” They might seem small, but those lyrics hit HARD when this exact moment is something you’ve experienced first hand. Plus, the way they give to that so simple that its perfect chorus of “Fuckin’ a, it’s almost like you read my mind.” The melody, the harmonies, the frankness of the whole damn thing. It’s magic.

The first sign that Cosmic Thrill Seekers was going to be more than just a sophomore record came from the first notes of the album’s pseudo-title track, “Cosmic Thrill Skeeing Forever.” It was something about the way the song starts with these beautiful falsetto vocals that work in a call and response fashion with bits of chaotic energy. This was the first time that it was made clear that listeners would be going on a journey with Prince Daddy & The Hyena — the song sprinkles in bursts of high-octane energy and then lulls you back into a false sense of serenity. It’s burst and decay tactic keeps you on the edge of your seat before hitting you square in the stomach with the heart-wrenching delivery of closing lyric “I’m thinking a fireplace and a small dog/maybe some dark green and dark purple walls/but it’s not safe to think about forever…” and then spiraling into full-blown chaotic catharsis.

And then we’ve got “Slip.” This is, without hyperbole, the best song that I’ve heard in at least five years. Melodically? The track bounces around like a top 40 pop song, with lyrics that read like Gregory splaying himself and putting it on full display for the world to pick apart. Hearing the back half of this song for the first time was a whole moment for me. It was pitch black and my room was only lit by the dull glow of my cellphone screen, the perfect setting for your first run through an album that will, no doubt, change lives. Kory’s voice swells around the delivery of  “A hole in my head and it’s infinitely black/Pulling me in with no way to fight back/so I get to know him pretty well/think he knows me too/He says that all my friends are so onto me/they catch me slipping into obscurity/just please let me be” and then reach their full potential as he angstily shouts “I’m sick of feeling small/and I’m sick of feeling dumb/I’m sick of feeling every little thing that I’ve done wrong.” Naturally, because I’m a big ol’ baby, I shed some tears hearing this.

I could go on forever about how much each of these songs has grown to mean to me in the short time that I’ve spent with this record. It’s been a little over a month since the first time I pressed play, and I’ve had a new favorite song every day. This is the kind of record that will change lives for kids today; it’s at the level of Green Day’s American Idiot and My Chemical Romance’s The Black Parade, two records that changed the way these bands were seen by the masses. It’s the kind of record that’s larger than life and somehow still extremely personal. It’s a broad stroke of genius that will be celebrated for years to come. I can promise you that. The last few seconds of Cosmic Thrill Seekers are identical to the first, cementing the idea that the journey we’re on with Prince Daddy and The Hyena is cyclical in nature. It’s just like Scully said, “It begins where it ends…in nothingness.”