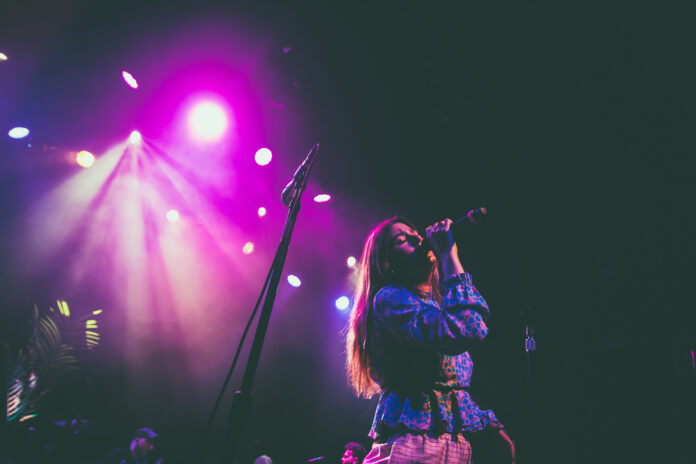 There’s a specific part of a concert where the crowd is settled down and an artist has them right in the palm of their hand. You get over the initial rush of the beginning and the whole building comes into a hush as an artist gets into a really emotional moment. In the middle of her sold out show at New York in Irving Plaza, Swedish-born singer LÉON began to sing “Body,” a song off her 2017 EP of the same name.

It’s a song that LÉON has expressed as a composition of nostalgia. Summer love, in particular. We’ve all had instances where we become mystified by the feeling of love mixed with intoxicating permeation of beautiful weather. She sang the first verse of this song in a very soulful matter. She then seamlessly mixed this song into a cover of Fleetwood Mac’s 1977’s hit, ‘Dreams’. The crowd started to catch on to this and the whole building joined in a singalong. The duality of these two songs was not lost on me, particularly as the singer has noted it as one of her favorite songs. One deals with massive changes of upheaval and the other is daydreaming about a particular point in your life where everything appeared to be nirvana. Some of the best artists can bridge the past and present. While there’s a Fleetwood Mac influence within Leon, she is able to make that unique to her own.

With this show, everything felt as though LÉON was inviting you to her world. The stage designed was complete with a fancy and cozy living room set up, complete with a lamp and large rug. A sign with LÉON’s name was illuminated towards the front of the drum set. Fan eagerly anticipated her arrival to the stage, often talking about their favorite songs from the recently released about during intermission.

In a way, everything was leading up to this point. Leon has had a few EP releases beginning with 2015’s Treasure going into her first full-length album, aptly titled in her name in March. An artist who has control of her destiny with her own imprint, to title their first official album like this is fitting. These songs on the album deal a lot of with ebb and flows of growing up and trying to find yourself in your early part of your 20’s. We’ve all been lost in the fog. The singer started on an upbeat note with two songs from the album, “Lost Time” and “Baby Don’t Talk.” Very fun and charismatic, Léon danced carefree, losing herself into the music and reaching out to fans to make a connection with them.

Even where the show slowed down, as she sang the 2017 ballot, ‘I Believe In Us,’ LÉON’s vocal range and ability seemed to command the crowd’s attention. She mentioned her beginning shows in the New York city area and now to return to a sold-out show, it felt like validation. And it should. For an artist who has built up a steady and devoted fan base with quality releases, the New York show seemed like everyone got together and had a victory dance – and maybe a happy cry or two.