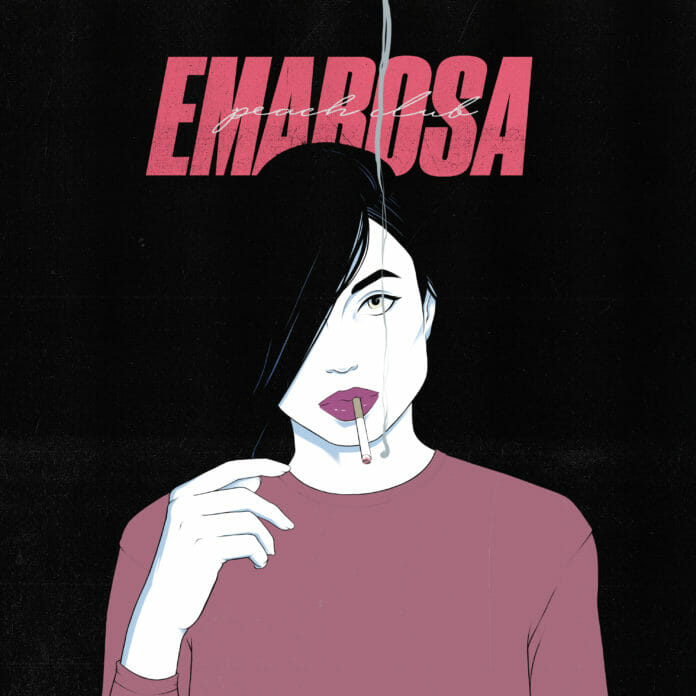 Having interviewed Emarosa at almost every iteration of the band, I find it not only fitting that Peach Club is the next step in the band’s journey, I find it exciting. Based on previous interviews with them, they feel the same way.

Anyone who truly listened to the band’s 2016 release 131 will be ready to groove to the true synth-pop offerings on this new release, while fans of Relativity will understand that the roots were there all along. As a major hint to this, Bradley Walden–Emarosa’s lead singer–changed his Twitter handle to Bradley Rae Jepsen-a nod to Carly Rae Jepsen, the pop maestro who penned “Call Me Maybe.” Emarosa is a pop band now; the best pop band since 1986. It’s evident if you go track-by-track through Peach Club.

The album ignites with “Givin Up,” which was the first single, released back in November. It’s hard to want to quit love with this pop jam. If listeners thought this was going to be another Versus, the horns say otherwise. “Don’t Cry” is next, and listeners should fully embrace the synthesizers and Walden’s falsetto, because they are here to stay. This song sounds like a personal apology as listeners begin to realize that Peach Club is a well-crafted emo record spilling from a keyboard.

“Cautious” is incredibly radio-friendly, and that’s a compliment. Ten tracks of a song like this would go gold, but Emarosa has so much more for listeners. Walden recently explained that he wrote “Get Back Up” for his mother-a single parent who raised Walden and his sister. He pines, “when I get back up, I promise you, I won’t be the same,” which seems fitting for this album.

“So Bad” is so 1985, because what was old is new again, only much better. “Help You Out” is the offering that sounds closest to the band’s previous records, and it probably packs the least punch of all the tracks, but it’s a good interlude.

“XO” addresses the loss of love, referring perhaps to Walden’s own personal life. In this tune, Walden seems hopeful for a reconciliation. In the next song, not so much. “Hell of It” seems to solidify the matter-infidelity is hinted at as the reason for the relationship’s strife. This brutally honest song is still easy to listen to. In “Comfortable” Walden addresses his inability to be faithful, as well as his inability to cop to his own excuses. This downbeat track is off-genre and raw.

It’s unclear if “IW2DWY” is looking forward or looking back, but singing “I wanna die with you” sounds hopeful in the most emo sense. The album ends with “Wait, Stay,” and Walden seems to take a step back further with this ballad, suggesting he’s “not a saint,” but he “remembers what it’s like to be good.” My emo heart can’t take the indecision.

Understand that pop is not a dirty word; Walden’s silken voice was made for this album. I’m going to keep pining for Emarosa to do an acoustic cover of Michael Jackson’s “Man in the Mirror” until it happens, because it needs to. Peach Club is a great holdover until then.