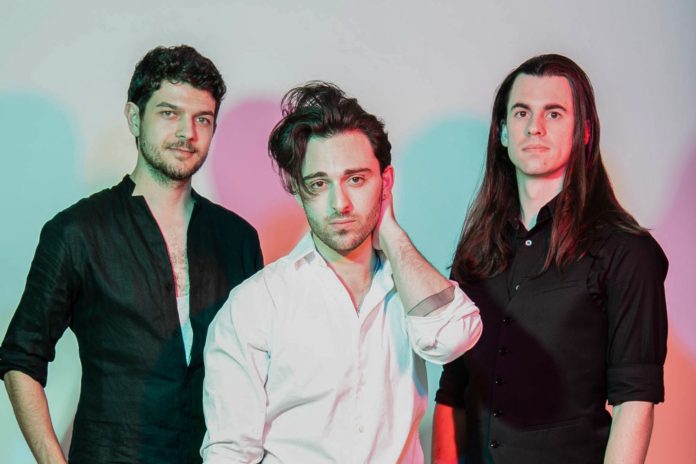 New York City’s indie-pop trio Origami Crane came together when all three members — Jake Fine (Vocals, Guitars, Piano, Synthesizer), Max McEwen (Percussion), and Noah Wilson (Bass, Synthesizer) — were students at Berklee College of Music in Boston, Massachusetts. Coming from various different projects, the guys decided it was time to work together, so they decided to pack up all of their things and and moved to New York City to form together what would become Origami Crane.

Since formation, the band has formed extensively throughout venues in New York, culminating in a performance at the Mondo Festival in October 2017. The band has earned a reputation locally for their exciting live performances — driven by charisma and backed up by undeniably catchy music that is easy to want to dance to.

Last month marked one year since Origami Crane has formed, and recently they have been working on their debut EP with Grammy-nominated Brent Kolatalo (Beastie Boys, Kanye West, Ariana Grande) and Arthur Indrikovs (Florence + the Machine, Calvin Harris). Today, we are excited to be premiering the first single from this project called “Turn Around,” which you can check out below.

Explaining where the songs come from, Wilson explains that “‘Turn Around’ is a super fun dance tune, inspired by an early experience we had after moving to NYC, where one of our members – who will not be named – was rejected by a pretty girl at a show.”

Sure enough, “Turn Around” is a shining example of what Origami Crane is all about. It’s an exciting pop song with obvious beats designed to keep you moving and tapping along throughout the entire 3 minute ride. And while we don’t have any additional information on the upcoming EP and when it will be released, based on “Turn Around,” it’s time to get excited for what Origami Crane have in store.