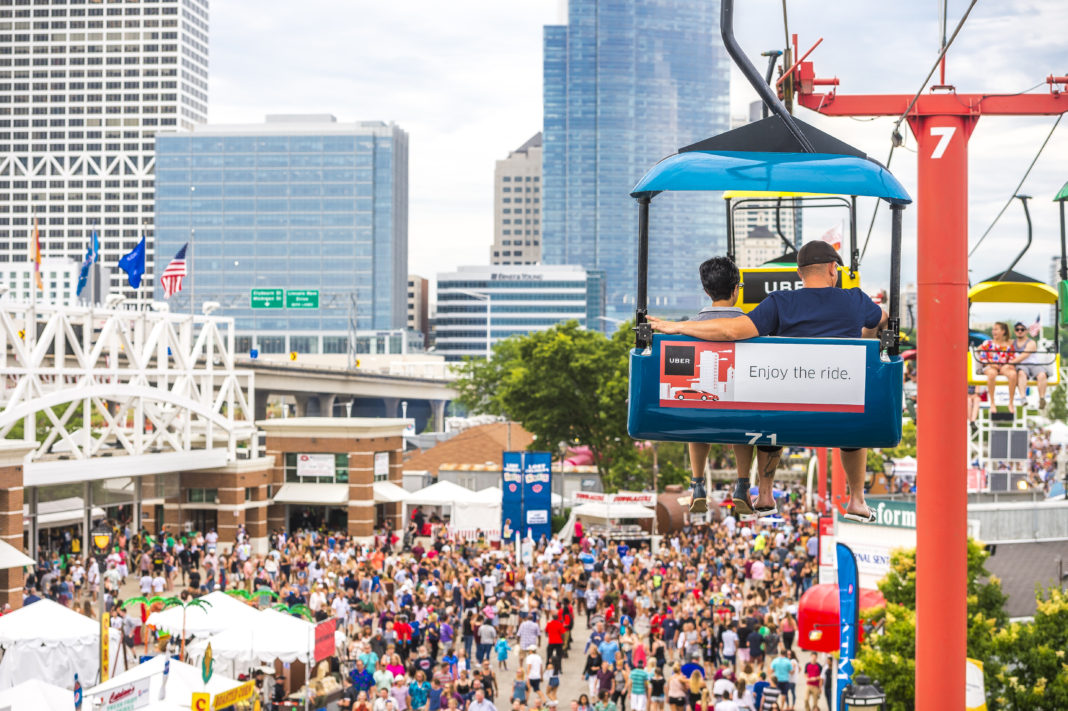 It wasn’t until 1999 that the Guiness Book of World Records named them “The World’s Largest Music Festival,” but Milwaukee’s Summerfest was making a name for itself nearly 30 years before then.

The vision for Summerfest came from the city’s late mayor, Henry Maier in the 1960s. The first festival was held in 1968 at 35 different locations throughout downtown Milwaukee including a 6-acre site on the lakefront, Milwaukee County Stadium, Pere Marquette Park and Washington Park.

In the 1970s, the festival moved to an abandoned 15-acre Nike missile site along Milwaukee’s lakefront. Permanent stages and structures began to form as they were granted the right to use 30 acres of lakefront property. The smile logo, which is still used today, was also created during this time by Noel J. Spangler and Richard D. Grant.

By this point, artists such as Dolly Parton, Journey and Humble Pie & the Blackberries graced the music stages while entertainers such as Bob Hope, George Carlin and Billy Crystal took to the comedy stages. Behind the scenes, Bob Babisch rose to become Entertainment Director.

For the past 40 years, Babisch has been an integral part of the changes made to the festival. He watched as the state-of-the-art amphitheater was built as well as the Miller Lite Stage and Harley-Davidson Roadhouse stage. He’s watched artists such as Maren Morris and X Ambassadors go from smaller stage alumni to top 40 radio. He’s been able to book a headlining act that he worked to get for years – The Rolling Stones.

He’s just as much a music fan as the regular festival goer and makes sure that all genres are represented throughout each of the 11 days.

“There’s such an eclectic lineup with every genre every day,” he said. “There are different spots for all walks of life.”

Babisch is currently in charge of leading the music production team and overseeing the music portion of events held on the grounds, at the BMO Harris Pavilion and in the American Family Insurance Amphitheater. For him, everyday is a new adventure.

“When you have the kind of event we have, every day is something different,” he said.

The same goes for Assistant Booking Director Scott Ziehl. When he became a permanent part of the Summerfest team a few years ago, he knew he wanted to make sure that every musician that stepped onto the grounds was happy and able to put on the best show possible. In addition to that, he wanted to make sure the stage managers, stage hands and runners were as equally prepared to put on the show.

“Rock and roll daycare, we call it,” he said. “We’re here to answer all questions and have them know what to expect when they go out there.”

That doesn’t mean they don’t take a moment to take it all in. While the first day may be spent putting out the occasional fire and the next few days after that are preparing for the days to come, they definitely get to enjoy the entertainment that surrounds them.

“There’s the level where you work hard and are staging for what’s about to happen, but when the lights go down, the music starts up and the band hits the stage as the lights come back up, it’s a buzz,” Babisch said. “I make it a point to take a second to appreciate it.”

There have been many seconds in Babisch’s and Ziehl’s career that they’ve appreciated.

Babisch remembers an east coast band that had maybe 15 people in the bleachers when they started their first song. Through the power of social media, he watched 15 turn into a couple thousand.

Ziehl remembers getting a last minute call to add a band from Las Vegas to their lineup. The band? Panic! At The Disco.

For them, it’s about all musicians – no matter how far along in their career they are. It’s the unexpected level of popularity. It’s the support and development of new music. They pride themselves on giving everyone the chance to play in front of their fans and their peers, from the emerging artists stage to the amphitheater.

“This is a festival for the people. From the smallest, youngest bands to the biggest in entertainment and everything in between,” Ziehl said.

After celebrating 50 years in 2017, Summerfest continues to grow and impress their audience. In addition to the 800+ bands that play over the course of 11 days, they have been able to renovate stages, create The Summerfest Foundation, Inc., announce a historic partnership with American Family Insurance and so much more. They offer daily admission promotions, multi-day passes and premier parking. They are more than just the world’s largest music festival, they are world’s most impressive music festival.

The 2018 Summerfest takes place June 27-July 1 and July 3-8 in Milwaukee, Wisconsin. For the full lineup and tickets, visit summerfest.com.