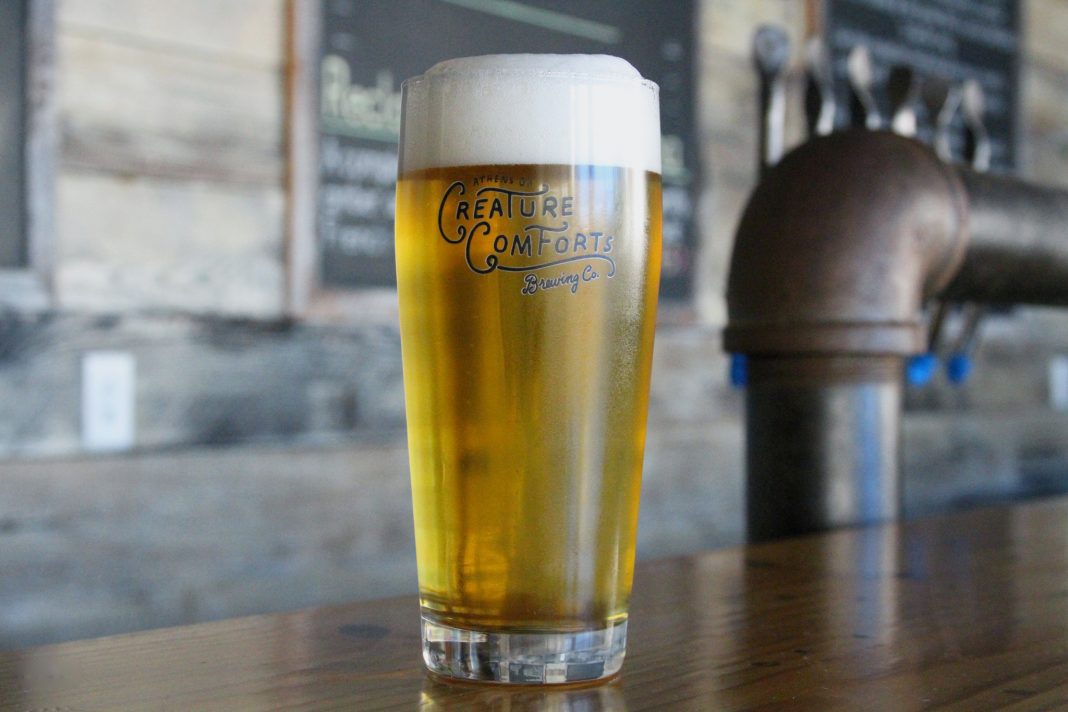 I’m coming for you, southeastern USA. I’m toppling confederate statues, eating too much Chick-Fil-A—hey, I might even stop by John B. McLemore’s crazy hedge maze. I’ve rented a canoe in Appalachia and I’m floating down a river of sweet tea to that giant Noah’s Ark museum thing in Nowhere, Kentucky. Along the way, I’m penning of the sweet, refreshing beers and grooving music gushing from the Mason-Dixon line to the Florida-Georgia line. Here’s to you good reader, may you experience all the southern comfort in between.

Entertainment renaissance man Donald Glover runs his spade through our cultural soil, digging up the slimy grubs of our internet age: 3D printing of guns, message board trolls, basic white girls, slacktivism, et al. The concept is fertile and Glover’s snarky wordplay is at times infectious, especially when it syncs with the album’s more hip-hop and R&B moments. Sweetwater 420 blends the standard herbs and citrus hops in an easy-drinking, crushable offering. Like most session ales, there’s light malt and minimal bitterness, so you can kick a sixer while devoting most of your sensory energy to the spastic tuneage.

Cage the Elephant abandoned Bowling Green for England before releasing their debut record. The instruments sound like they were recorded in a back-alley garage, grabbed from a dumpster or stolen from the homeless, broken guitar strings and all. Matt Shultz could have been constipated when he did vocals for “Ain’t No Rest for the Wicked,” which is the most overplayed single this past decade. Luckily, Against the Grain’s beer is only shitty by name. Wipe away your pain with a brown ale flavored by brown things: malt, burnt caramel, toffee, black coffee, dark chocolate and nutmeg.

BIBO
Creature Comforts Brewing Co.
What: Pilsner
Where: Athens, Georgia When: Year-round ABV: 5.20%
Imbibe with Manchester Orchestra’s A Black Mile to the Surface, 2017

Andy Hull is at his most vulnerable and diverse here, oscillating between soft, whispering moments and girding, bombastic outrage—all with Sufjan Stevens-like intimacy and narrative scope: love, God, the birth of a child, family, hope. Tracks share the same notes and patterns, but change rhythms to effortlessly flowing into one another—a high effort journey that yearns for the fertile soil between emo and contemporary indie. Reach the surface with a German Pilsner fashioned from New Zealand hops with notes of pineapple and black pepper. A balanced, easy-drinking beer for the tired, weary and hopeful.

Where Kendrick Lamar’s records deliver in provocative, can’t-miss and eclectic, Frank Ocean’s 2016 LP is sparse, subtle, even calming. Beyond the vocoderized vocals and coral-colored tones of “Nikes” is a track about hedonistic materialism and the tragic death of Trayvon Martin. “Nights,” is smooth and buttery on the surface, but Ocean sings about his cocaine addiction after Hurricane Katrina. What Abita’s funky, fruit-infused fruit beer lacks in subtlety, it makes up in a lingering raspberry aftertaste overload that’s worth meditating on as you listen. By the time you reach the heavy-handed “Facebook Story” followed by the Stevie Wonder cover “Close to You”—well, you realize that pairing is the most obvious on the album.

An immersive and soulful dreamscape from former chug-a-chug, post-hardcore bangers turned Alt-J apostles. This is their best and most expansive work yet, gliding through dark, jazzy passages to shimmery, Gotye-esque pop choruses, giving a decisive arc to the record that its predecessor One Big Particular Loop (2013) sorely lacked. Jai Alai aged in oak is a creamy, succulent IPA. With sweet, tropical pineapple and crescendos of mango and vanilla, its equal parts balanced and surprising (in a good way)—perfect match for Polyenso’s shapeshifting musicality.

Catchy for funky, punch-drunk groove, refreshing for raw production. Brittany Howard’s words unfurl as bloody, untamed offerings—as if she downed a shot of bourbon and then sang everything in one take. Her sheer talent is exemplified by how she navigates the musical variety of the album, delivering epic performances on the bluesy “Dunes” and the funkadelic “Future People.” Vanillaphant is an easy-drinking porter with warming flavors to match the Shakes’ soulful sound: vanilla bean, lush cocoa and pillowy marshmallow.

Take equal parts acapella folk and quirky electro-pop and mix together for an innovative sound listeners didn’t even know they needed. The debut record is fun and undeniably dancy, but surprisingly smart, demanding many listens and impromptu dance parties. Assertive hop bitterness fills the space left by Sylvan Esso’s, at times, playful sound. Plenty of the usual suspects here: grapefruit in the taste and tropical notes in the smell. What sets this one apart is a distinct yeasty scent and hop resin that pleasantly linger throughout, giving a twist to this east coast brewed, west coast style IPA.

Where lesser metalcore bands left much to be desired with their studio offerings (A Day to Remember, The Devil Wears Prada, Norma Jean), Underoath’s best work stands alone in the genre as a forward-thinking record that not only left no room for sugary filler, but also translated beyond the niche “scene.” It’s an immense, landmark album that paved the way for Warped Tour bands of the past decade. Pit this against Funky Buddha’s own epic offering—a porter gushing with a chocolate, coffee and coconut—the likes of which the beer world hasn’t tasted. This is porter worth seeking out—in the least likely of places.