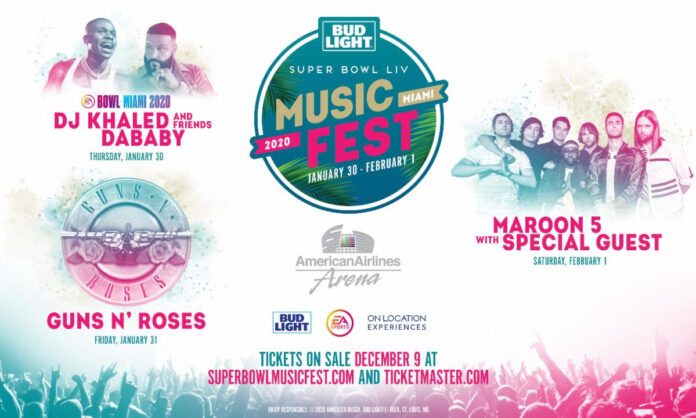 The Super Bowl is quickly approaching as the NFL 2019 season wraps up, and what better way to celebrate the two teams battling it out than a music fest that showcases some of music’s greatest talents?

Returning for its second year, the Bud Light Super Bowl Music Fest will be giving the people of Miami a chance to see a whole slew of acts (including the likes of Maroon 5, Guns N’ Roses and DJ Khaled) on stage leading up to football’s biggest event of the year.

According to a press release sent out, the festival is slated to last three days where during which, several bands will be performing at the AmericanAirlines Arena. Per the schedule, on Thursday, January 30 the festivities will kick off with some of the biggest names in the hip-hop community, including DJ Khaled and DaBaby.

But that’s not all!

Following that performance on Thursday, the fest continues on the next day, Friday, January 31, where Rock icons Guns N’ Roses will be doing a performance. Then lastly, on Saturday, February 1 (the day before the big event), Maroon 5 will be taking the stage with a surprise guest.

Speaking of the festival, John Collins, the CEO of On Location Experiences, shared in a press release:

“After a tremendously successful launch last year, we are thrilled to bring the Bud Light Super Bowl Music Fest back for its second year and to the city of Miami. The Music Fest is a revolutionary event that allows more fans, both of music and the NFL, to participate in Super Bowl events, while also offering activation opportunities for sponsors and a unique entertainment space for corporate clients,” Collins said. “None of this would be possible without the support of our fantastic partners at Anheuser-Busch, EA SPORTS and AmericanAirlines Arena. We look forward to kicking off another Super Bowl weekend and providing all fans with an exceptional Super Bowl experience.”

“As we culminate our 100th season, we’re proud to continue to build upon our partnership with On Location Experiences through the Bud Light Super Bowl Music Fest. This energetic series of concerts will further add to our already exciting week, and will give our fans another opportunity to experience the power and energy of the Super Bowl,” says Peter O’Reilly, Executive Vice President, Club Business and League Events, National Football League.”

Tickets for the forthcoming event will go on sale this Monday, December 9 at 10 AM, eastern time. You can find out more information, and get your tickets for the festival by going here.

You can check out the full schedule of the upcoming Bud Light Super Bowl Music Fest below!