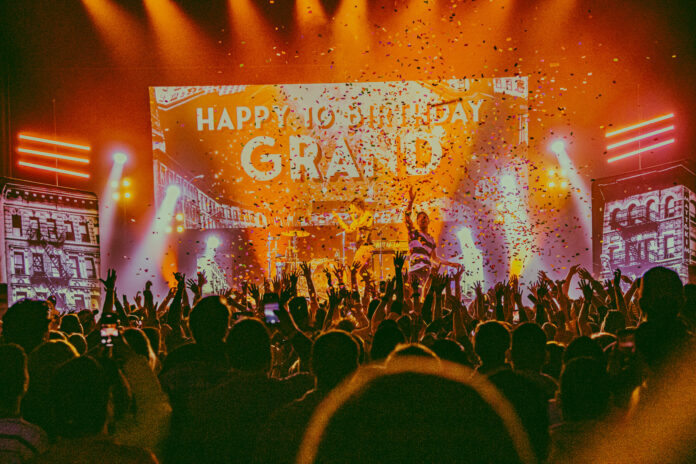 To celebrate the 10th anniversary of their album Grand, electronic pop duo Matt and Kim have been touring the country and making damn sure their fans know how much they love them. The couple (both on and offstage) have delightful personal and musical chemistry, and for their sold out Chicago show, they pulled out all the stops.

If you’ve never been to a Matt and Kim show (which, by the way, many of the audience members were guilty of), prepare to feel like you’re at the best house party in the world. Matt and Kim started out playing to small groups in lofts, so they really know how to make everyone in the audience feel like they’re part of the show. In between songs from Grand, the duo would get up from their instruments and dance around to remixes of 50 Cent and shoot confetti cannons into the crowd.

About halfway during the set, Matt asked the crowd if they’d rather hear more music or watch a “boring powerpoint” of photos of the two of them recording Grand. I was delighted that the crowd picked the powerpoint. We got to see intimate, candid photos of the duo recording their iconic album in Matt’s childhood bedroom. After the powerpoint, they finished playing their album to a massive roar of cheers, but not before Kim flashed the crowd (again, if you’ve been to a Matt and Kim show before, you’re used to it!)

I’ve shot Matt and Kim quite a few times before, but there was something really special about this show. Celebrating an album’s 10 year anniversary is a huge deal, and for this electronic duo to have made it out the other side still together and still making amazing music, that’s a huge deal.

Matt and Kim are currently on tour and are headed to California and Texas next. Tickets can be purchased HERE.