Advertisement
Home News Film ‘Captain Underpants: The First Epic Movie’ is a fresh adaptation of a... 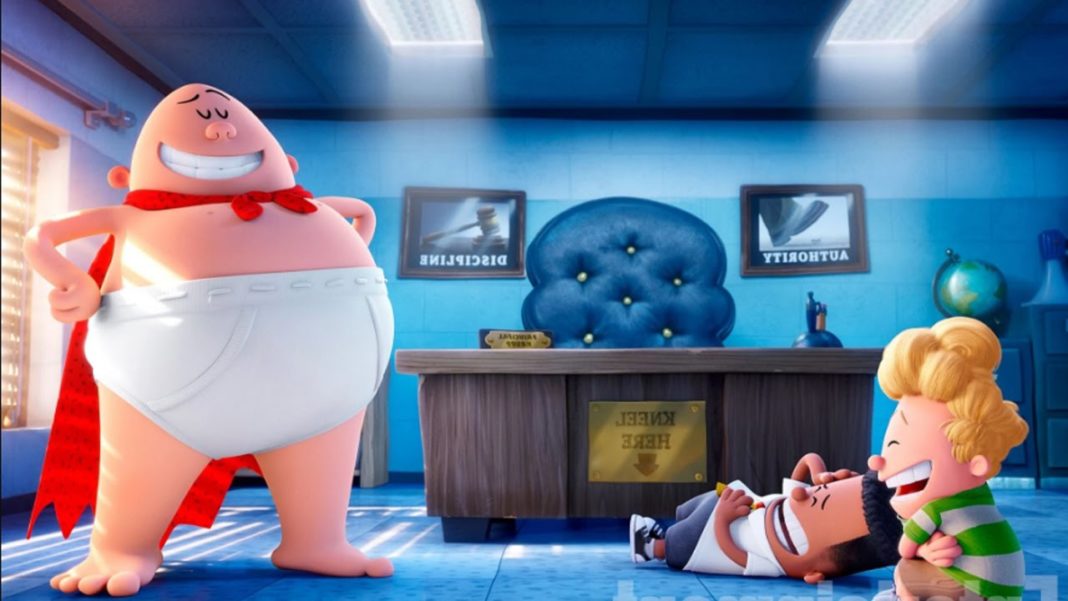 The source material for Captain Underpants: The First Epic Movie is a middle grade series by cartoonist and writer Dav Pilkey that was first published in 1997, and it has been delighting children from its first printing. It’s an irreverent mix of potty humor, outlandish adventure, and close friendships that makes for a very appealing read to the middle grade set. With over 70 million books sold and such huge popularity, it’s amazing we haven’t seen a film version before now. I was accompanied to my screening by a Resident Expert on middle grade fiction and Captain Underpants in particular, my 9 year old who has been reading the series and Pilkey’s other books for a few years and is an avid fan. The theater was packed with kids aged one to at least 11, and by the time the movie started, they were becoming mutinous with boredom. Needless to say, expectations were high in the theater.

The story focuses on George (Kevin Hart) and Harold (Thomas Middleditch), two 4th graders at Jerome Horowitz Elementary, who take being the class clowns to a whole new level. The school is run by the dour Mr. Krupp (Ed Helms), who seems to live to make the children at his school miserable. George and Harold combat this with over-the-top pranks and a steady stream of homemade comics featuring their favorite superhero, Captain Underpants (also Ed Helms), a clothing minimalist who wears tighty-whiteys and a red cape that often seems more of a hindrance than help. Due to their efforts the boys often find themselves in Mr. Krupp’s office, even though he rarely has proof that they are to blame. When one of these pranks gets recorded the boys are faced with the threat of separate classes and, in desperation, attempt to hypnotize Mr. Krupp with a cereal box ring. Miraculously, it works, and they decide to turn Krupp into a real live Captain Underpants. The hypnotized Krupp takes to the role like a child to cotton candy and almost immediately the boys learn that a fictional Captain Underpants is a lot easier to write than he is to control as an adult who strips down to his underwear and runs off to fight crime.

Thankfully Krupp doesn’t remember his time as the Captain, but he does remember that George and Harold should be switched to separate classes. The boys quickly become exhausted trying to keep Krupp in Captain Underpants mode to prevent that. Just at the point where this story line is beginning to grow tiresome, the real villain, a newly hired science teacher named Professor P (Nick Kroll) reveals his maniacal intentions to get rid of all laughter in the world. George, Harold and Captain Underpants refuse to stand for that and fight back against his nefarious plot which involves a giant robotic toilet, the school’s humorless tattletale Melvin (Jordan Peele), and a brainwashing ray.

Dreamworks created a beautiful, lush world for this movie, with smooth animation and a bright color palette that perfectly matches the cheerful tone of the story. Heavily inspired by Dav Pilky’s style, it softens his slightly rough and childlike drawings to achieve a bubbly world that seems like a refined version of the original art. They take a great opportunity to show the original style and use that for the kids comics when they show Captain Underpants’s back story. The voice acting was well done all around, but Kevin Hart stood out from the first minute of the film playing George perfectly as the boisterous and outgoing smart ass.

While the plot of Captain Underpants: The First Epic Movie is a silly romp based on toilets and childhood rebellion there is so much going on underneath the surface that it elevates the film from playful fun to very good. George and Harold, neighbors and friends since kindergarten, display the kind of healthy relationship that is rarely seen between two children, let alone two boys. They support each other, emotionally and physically, neither hesitating to do what’s necessary whether it be to give a hug when one is sad or run into mortal danger to save the other’s life. Both are open to understanding other’s perspectives, even their own antagonists. When snooping around Krupp’s house they find clues to a sad existence; there is only one fork, one glass, a fridge empty except for a bottle of ketchup. Before leaving they talk about how he must be very lonely with no friends. Learning these skills is not the point of the film; rather, they start out with them. For Harold and George, the specter of being separated is the true danger. They fear losing the connection they have built with each other. So often children’s movies based on popular series, especially for this age range, come across as cynical cash grabs, but Captain Underpants succeeds in maintaining the original spirit of the books while providing plenty to enjoy for newcomers. The movie certainly got a loud and positive reaction from the audience and my Resident Expert agreed, stating with his usual brevity, “It was great!”