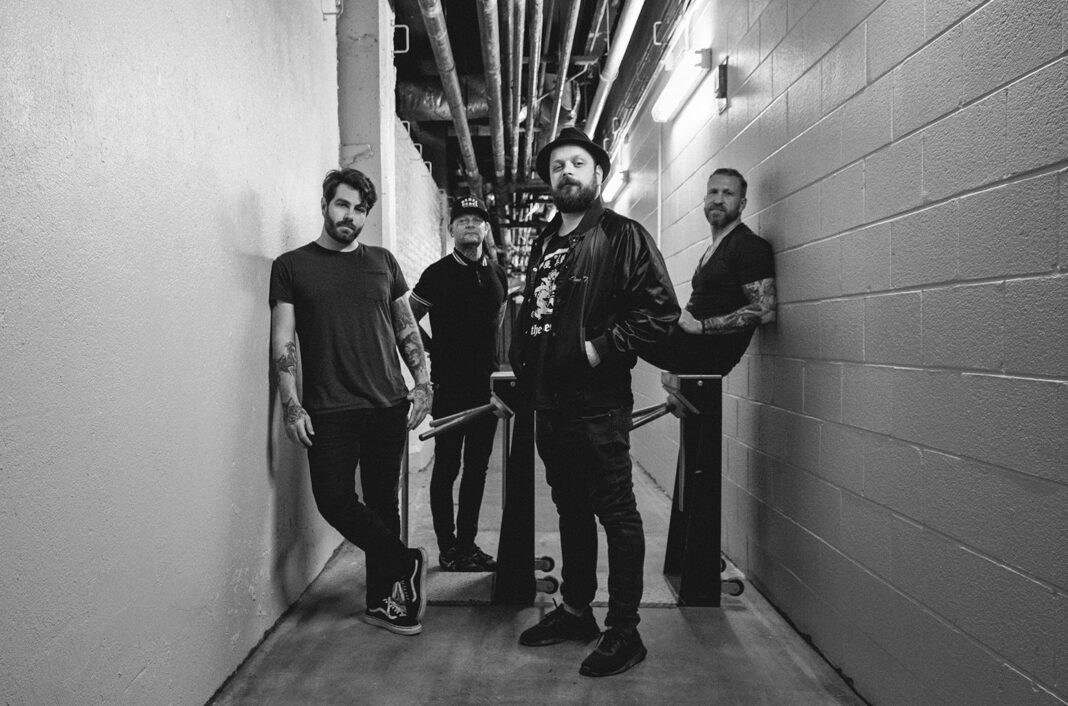 Red City Radio is a band that you’ve likely heard of before. Since forming in 2007, the band has performed with bands like Anti-Flag, Less Than Jake, New Found Glory, and many more. This is a band combined of four members — guitarist/lead vocalist Garrett Dale, guitarist/backing vocals Ryan Donovan, bassist Derik Envy, and drummer/backing vocalist Dallas Tidwell — who simply just love touring.

Red City Radio have released three full-length albums, with their last coming in 2015 with Red City Radio. It took the band until 2018 to put out new music, when they released their SkyTigers EP, but since then they have not slowed down, which was by design. As Dale tells me during our interview, he loves writing, recording, and performing music, so he doesn’t want Red City Radio to go through a long-time between the release of new music.

So, to do this, instead of going through EP and album cycles, Red City Radio has elected to go the singles route. They released their single “Love a Liar” back in September and followed it up with “Young, Beautiful and Broke,” just last month as well, produced by All-American Rejects guitarist Mike Kennerty.

Substream had the chance to catch up with Dale regarding their tour supporting Taking Back Sunday, releasing singles, and where Red City Radio goes from here. You’ll find our interview below.

So this tour is a little different for your band, since you’re opening on this tour but doing two nights in the same city. I’d imagine there’s probably a lot of crowd overlap, so did you find yourself approaching these shows any differently?

Well, you know, this is a different kind of audience for us, but we love it. We love going out there every night and surprising all the people. Taking Back Sunday is a really great band and their live show is just insane. They’re all very sweet people and we have a really good time hanging out together. I’d say it’s not different in the sense that we’re having a super good time, we love touring. It’s different in the sense that there’s people here. It’s a blast every day. We’re very grateful for Taking Back Sunday taking us on this tour.

This is a pretty cool tour, and Red City Radio has been a band for over a decade now, so if you can, what do you think is the coolest or strangest tour your band has done?

This is the coolest tour. Every day being able to play for so many people, wonderful people, is strange but amazing. Grateful for it every day.

Your latest EP, SkyTigers, came out back in 2018 but you’ve stayed pretty busy since then with new music. But before we get into that, can you just tell me a bit about this record and how, after being a band for so long, you keep them fresh and exciting for you and the listener.

I believe if you make a sandwich with hate, it’s going to taste like hate. If you make a sandwich with love, it tastes like love. I love our songs and I love music in general, and I love performing. It doesn’t get old to me, it really doesn’t. The meaning behind the songs, I still believe in that to this day. I’m singing from my heart. I never get tired of doing what makes me happy.

You’ve wasted no time since then releasing new music — with “Love a Liar’ and “Young, Beautiful, and Broke” coming out recently. How important was it for you to get those two songs out so quickly after an album?

We wanted to put out some new music for this tour, and we have some new music brewing. We’re going to be releasing, I don’t know how to say this — it’s very important to me. As a band, we went long since without releasing music [after SkyTigers]. I, to this day, don’t get it. I love writing music, I love performing music, and I want to do more of that in my life, and less of not doing it.

The music industry is changing right, it has been for a while, but it just continues to go more towards singles and playlists right?

I hope so, I mean, all I think we’re going to try to do is keep banging out music that we love to perform and we love to write, and hopefully people like it, too.

You did the singles with Mike from All American Rejects, who SkyTigers for you as well. How’s that relationship with him and how much does he help your band

Oh he’s great, Mike’s the best. He helps out a lot of bands that he records. Mike is one of the best engineers and mixers, whatever they’re called; mixologists — just kidding — in the game today, honestly. He definitely makes us sound pretty.

You’re working on an album here pretty soon with Mike as well right?

How many ideas/songs do you have for that, and where do you think you’ll go with it either lyrically or sound wise?

More tambourine. More cowbells [laughs]. Nah, I mean, we’ve never really, like — I would say what to look for or to expect from Red City Radio, I wouldn’t expect anything. We’re gonna constantly evolve and change. We’re gonna always be different, and to us we’re gonna always be better. We’re gonna just continue to really truly not give a fuck what anybody says about us. Keep rockin’ and rollin’ for everyone that wants to experience the magic and power of rock and roll.

So outside from new music coming, what else is going in with Red City Radio

Well, we’re gonna be in Chicago for Lawrence Arms Christmas Show. After this tour, we fly to Europe to meet up with Hot Water Music. After that maybe just, you know, I don’t know, maybe a gin and sprite. Our booking agent is our guitar player, Ryan, and we put these singles out by ourselves digitally. We keep it all in the family, man.