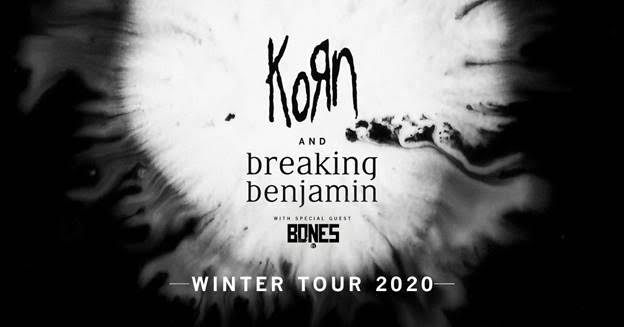 Korn and Breaking Benjamin have once again teamed up for a co-headlining tour, this time set to take place in early-2020.

Korn will be continuing to tour in support of their latest album, The Nothing, which dropped just last month. Breaking Benjamin released their last full-length of original tracks, Ember, in 2018; however the band has announced that Aurora — a collection of reimagined songs from their entire discography — will be released on January 24th, 2020.

Korn and Breaking Benjamin will be joined by BONES for the entirety of the tour, which kicks off on January 23rd in Allentown, Pennsylvania and wraps up on March 1st in Fresno, California.

Citi is the official presale credit card of the tour. As such, Citi cardmembers will have access to purchase presale tickets beginning Tuesday, October 29th at 10am local time until Thursday, October 31stat 10PM local time through Citi Entertainment