It dawned on me sitting in the theater watching Jamie Lee Curtis’ Laurie Strode grace the big screen again, almost 40 years to the day she first did in 1978’s landmark Halloween, that this was wrong, all wrong. The hype surrounding Halloween’s 2018 return was, understandably, high. It was hard to not get caught up in what was billed as a showdown 40 years in the making, I’m guilty of it myself. It was also the first new Halloween film in almost ten years since Rob Zombie’s polarizing remakes of the first two films.

Halloween, of course, is the choose your own adventure of horror franchises. There are flow charts for all the ways you can watch the series, that’s how convoluted it’s gotten. H40 (as we will refer to it here because saying Halloween [1978] and Halloween [2018] is ridiculous and one of the worst marketing moves) had, probably, the cleanest slate any horror franchise has ever had. Erasing 40 years worth of sequel stories, H40 only counts the original in its timeline, meaning Halloween II never happened, Laurie was never Michael’s sister, Halloween 4, 5, 6, never happened, meaning that there was no need for H20’s existence and especially Halloween: Resurrection. During the promotion for H40, Curtis herself even publicly disavowed H20, saying “I was going to get a paycheck,” and making it clear that H40 was her timeline.

Of course, it was amazing seeing Laurie Strode back on the big screen again, 40 years after the original, still fighting Michael. There’s something about that pairing and how long it has endured that Halloween fans will always be drawn to. The results of this retcon, though, were… lackluster to say the least. With everything working in its favor, H40 instead delivered a very flat storyline, not accomplishing near as much as it pretended it did. It had a world of chances at its hands and squandered them all. With Laurie never being Michael’s sister, it was hard to believe exactly why he would come after her again and most importantly, Laurie being ready for Michael’s return gave her character nothing to work towards emotionally and she came off very one-note.

With this new timeline failing to live up to its potential, it became all the more apparent that the Laurie Strode saga was always a trilogy anyways. From a narrative perspective, if you are looking for a clear cut, beginning, middle, end, and a character arc that is emotionally satisfying, Halloween, Halloween II, and Halloween H20: Twenty Years Later is the only definitive timeline to follow. In saying that Halloween is a trilogy, that doesn’t mean that other narratives couldn’t be vastly more interesting. I’m just working with what I’ve got here.

The original Halloween set a bar that, if we’re all being honest, no other horror film has been able to top in the same specific way. Halloween was able to transcend the genre. It’s just plain good cinema and its simplicity will always be its best asset. It’s small things that give Halloween the depth it has. Like Laurie, Annie, and Lynda on their walk home from school, and I’ve yet to find a moment in movies that I love as much as seeing Laurie walk across the road to the Wallace house. If we’re looking at it as the first entry of this trilogy, it sets up a well fleshed out world and, like Star Wars: A New Hope, first and foremost, works on its own before having to be part of a series.

Halloween II is one of the best companion pieces in horror and the only sequel that comes close to matching the original, mainly because it continues on that same 1978 Halloween night. Michael’s increased body count by the end of the film gives Laurie even deeper trauma as well. As with any good middle entry, Halloween II shakes up the very foundation that the Halloween franchise is built on with the reveal that Laurie is, in fact, Michael Myers’ other sister; giving him a clearer motive as to his pursuit of her. Being released a year after The Empire Strikes Back, it certainly took cues from that major familial reveal. Most would also agree this twist is the genesis for the convoluted storylines we get in the following sequels The Return of Michael Myers, The Revenge of Michael Myers and The Curse of Michael Myers. These sequels took the series in an array of directions that left irreparable dents in the franchise. But the sister reveal works here as a one, two, three punch. Which leads us to the final chapter, Halloween H20: Twenty Years Later.

Halloween H20 is by no means a perfect film, but coincidentally the most important entry here. Coming just two years after Scream pumped new interest into horror, H20 was clearly attempting to adopt that model in some form and cash in on the new craze. In retrospect, it couldn’t be any more dated if it tried (Creed is on the soundtrack). H20 has forgettable, severely underdeveloped teens, one of the worst Michael’s of the entire series, multiple (horrible) masks (including a truly awful CGI attempt at one), and apparently Michael can see now even though Laurie shot his eyes out and he doesn’t seem to have many scars for someone who was burned alive. But its most redeeming quality and the reason it earns its place as the rightful concluding chapter to the trilogy comes from the believable and well-earned ending arc it gives Laurie Strode. This arc saved the Halloween franchise.

When we find Laurie in H20, she is suffering big time from PTSD following the events of 1978. Nightmares and heavy drinking are a staple, she’s struggling to open up to her new boyfriend about her past, and as her son puts it, “Your overprotection is inhibiting my growth process.” For most of the film, Michael appears as a specter presence to her, always right on the edge of her mind. Always torturing her even if he isn’t there. “Do you think it’s possible that something so tragic can happen to someone that they never recover from it?” she asks Adam Arkins’ Will Brennan. It’s this kind of conversation that was lacking in H40. There was no exploration of her trauma in a way anyone could connect with.

Laurie struggles so much with her past in H20 that when she finally decides to stop running, grabs her axe and charges after Michael screaming his name throughout the grounds of Hillcrest, it feels deeply earned. The Laurie we meet in H40 is guns blazing from the very start. There’s no arc. There’s no internal struggle there. But in H20, Laurie has to come to the realization that to truly conquer this force in her life, she has to face Michael once and for all, and having her organically work towards this moment is all the more palpable and downright satisfying. That single moment of Laurie deciding to turn the tables on Michael is equivalent to Darth Vader turning on the Emperor and saving Luke Skywalker. It’s the moment you as a viewer have been wanting.

There’s also the fact that Laurie lops off Michael’s head in the final scene. Truly, once and for all, ending his reign of terror against her. It’s one of the boldest moves horror has ever seen, and a moment H40 never had a chance of topping. Of course, we got the pathetic Halloween: Resurrection following H20 that retconned that ending, explaining it away as Michael having switched places with a paramedic meaning Laurie killed an innocent man. He eventually finds her in an insane asylum and kills her. But, if you just stop with H20 and refuse to acknowledge Resurrection (as most of us do anyway), Laurie Strode has the perfect end to her arc. Michael is dead, she is triumphant. The Halloween trilogy, satisfyingly, complete. 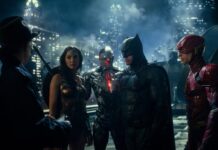