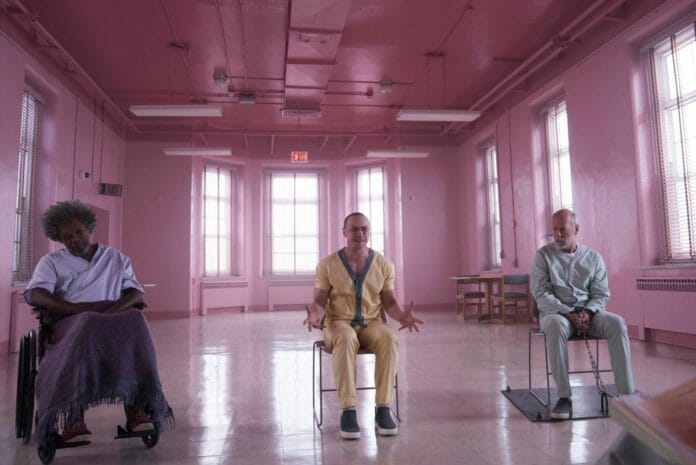 Before there was a universe that contained a legion of movies that led up to an assembled team-up against an all-powerful, gauntlet-wielding madman, there was 2000’s Unbreakable. Director M. Night Shyamalan created a story about two (what were thought to be) ordinary men who are tied together by a train accident that brought out their “super powers.” The movie’s overall plot that played out like you were turning the pages of a comic book served as a story of consequences and how they bring out the extraordinary within us. The hero/villain dynamic was the “Shyamalan” twist of the movie.

2017’s Split set up our unstoppable force, albeit a little bit more complicated. In a more localized story, our “villain” suffered dissociative identity disorder. The childhood trauma that Kevin Wendell Crumb suffered manifested himself into a monstrous identity called “The Beast.”  What was thought to be a standalone movie delighted audiences with the ending that revealed that one David Dunn–the main character of Unbreakable–was also present within this time frame. From there, the stage for the conclusion to this story was set with Glass. Although the title itself is foretelling in where the story ends up, we almost have two different movies.

Set three weeks after the events of Split, the first part of the movie serves as an appendage to the story that just concluded. David Dunn (Bruce Willis) is on the lookout for Kevin Wendell Crumb (James McAvoy) who is still at large and continued kidnapping young girls with intent to feed The Beast.

Once all three entitles are held together in a mental institution, complete with rooms that hinder their abilities, the movie itself begins to shift to encompass Mr. Glass (Samuel L. Jackson) as the maestro. Much like Unbreakable, Glass is pulling the strings almost as an instigator to this “final fight” that The Overseerer (Dunn) and The Beast are supposed to have. It is very much along the lines of a conclusion of a comic book story or a trilogy. The hero has to face his or her ultimate test.

The performances of the three main characters work to better the movie. McAvoy is even more stunning showing off more personalities as Kevin this time around. As an older David Dunn, Bruce Willis is stoic and battle tested. With David losing his wife to cancer, Willis displays an almost abundant sadness about himself. This figure, The Overseer, is his main purpose in life. It’s also tied to his son and the strength that how he views him provides. Mr. Glass (Samuel L. Jackson) does not really kick into his usual self until the second half of the movie. Jackson can portray the very intuitive and cunning villain that is moving the puppet strings for his own gain. Or so we think.

Shyamalan and cinematographer Mike Gioulakis do different camera techniques where you will hear McAvoy’s change in tone or accent with the hypnosis light and follow the bewilderment and terror on a supporting character’s face as they see him change. The action sequences are very quick, sometimes happen in the foreground to only hint at the brutality, and switches from different viewpoints. This technique is much like the conversation pieces as if the audience were a character.

Composer West Dylan Thordson is able to weave in each character’s score to indicate their moments and even combine them. The use of color–which is a trade mark in M. Night movies–is prevalent as well. In one scene in particular where all the main characters are in a room being interrogated, the color pink pours in from the shadows of curtain as a neutralizing agent to Glass, Kevin, and David.

One of the major themes prevalent from 2000’s Unbreakable to Glass is the concept of belief. Namely, the belief of self and one’s “abilities. If you believe in something strong enough, it will almost manifest itself to be truth. Dr. Ellie Staple (Sarah Paulson) is in the movie to be the totem for practicality. Of course, there has to be a natural reason for these men to do the things they do. Paulson’s character is commentary of comic book culture. That, as we get older, we must discard this inner child of thinking a man could fly. She does it so well that Kevin and David start to doubt in who they are relatively quickly.

The relationship between Dunn and his son Joseph (Spencer Treat Clark) is a testament to this. Even though Joseph has grown up, he still believes in his dad’s ability to be the vigilante hero, The Overseerer. The loss of Audrey Dunn pulls both David and Joseph together and the common link is crime fighting. For Glass and his mother, it was to withhold the promise that she reinforced that he was always special despite his brittle state. That he wasn’t a mistake.

Dr. Karen Fletcher (Betty Buckley), Kevin’s psychologist, thought of Kevin’s disorder as something to be studied further, almost like a super power. The findings were that Kevin could change his own bio chemistry with each personality. The Beast is shown to be even more vicious and imposing with Glass, but there’s also a theme of redemption that Shyamalan investigates with this character. This leads us to Casey Cooke (Anya-Taylor Joy).

With the conclusion of Casey’s talk with Dr. Staple, she says to her, “but you’re the victim?” Thinking in terms of the timeline of the movie, you would have to be hard pressed to think that Casey was ready to see or talk to Kevin after her kidnapping, even despite letting her go because The Beast deemed her heart to be “pure.” It’s through one instance of horror where Casey is able to escape that she is able to connect further with Kevin in Glass. They are both the products of broken homes and circumstances. One person created a “protector” and the other uses their empathy to bring the true Kevin out through touch.

There’s a parallel at play.  Yes, Casey’s character can show that within the monster there’s a human side to Kevin. It plays into the “shades of grey” theme that later goes on with Glass. When Casey reunites with Kevin’s personality, Hedwig, he even questions it. It makes you wonder why she would go immediately back to someone who had the worst intent for her. In seeing her scars, Kevin saw the real Casey. You see why Casey’s character is used in that way, but there’s an uneasiness to it.

The ambitious nature of the story stretches itself thin towards the third act. Many of the comic book tropes that are spoken are spelled out in a manner that does not consider the audience that it’s catering to. By now, movie goers are well versed in the MCU/DCEU movies that make money by the millions (and sometimes billions). They have grasped the liner concepts of good vs. evil and the final showdown.

One of the “twists” makes the character of Dr. Ellie Staple almost too conventional. There are always people who will doubt the existence of things unexplainable. This trilogy tries to stretch the boundaries of tried and true comic motifs and end on a note of a presence of an evil.

In turn, it’s revealed that Glass is the origin story Unbreakable was believed to be. Mr. Glass’s master plan in creating a huge tragedy is to activate the superhero in us all. He may not be a mistake, but he’s still a villain. Kevin and Glass still did terrible things no matter the consequences that brought them together.

Glass has some very ambitious themes and ideas that are intriguing. Usually where you think a story zigs, Shyamalan zags. However, here, he took the conventional route that upended a satisfying ending to a trilogy. Maybe there’s a spark in all of us that we can look at and decide whether we want to be a hero or villain in the end.