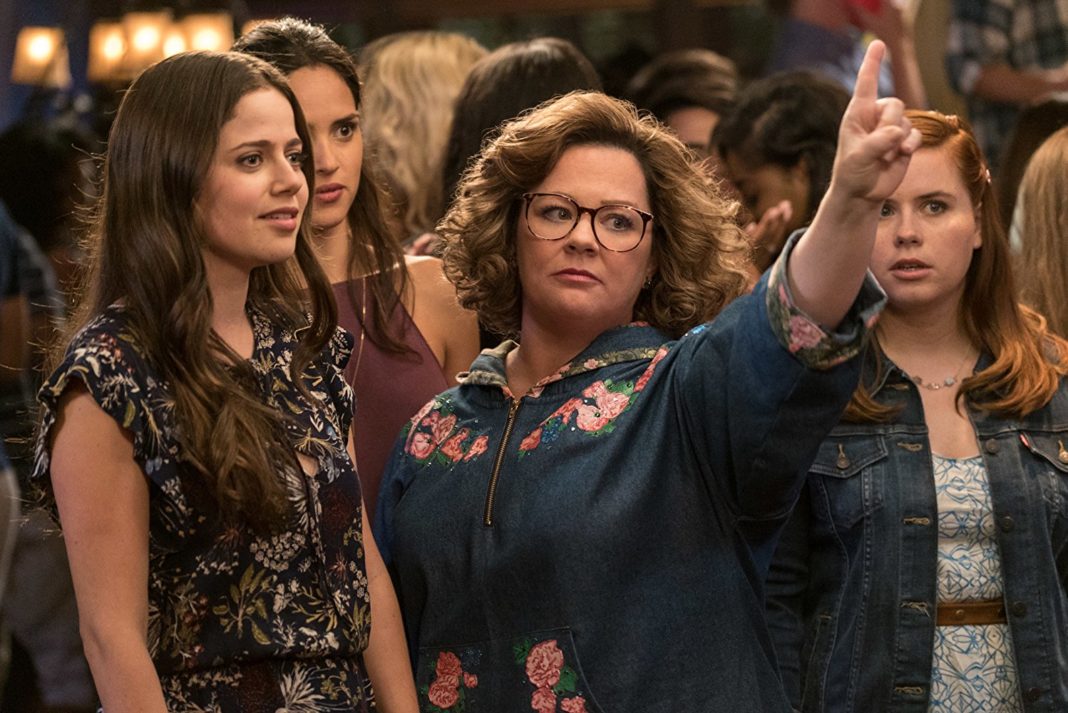 Although the trailers for Life of the Party make it look like a college comedy, it is aimed squarely at an older generation of women, particularly white mothers of college-aged children. It attempts to explore a situation that a certain number of older women find themselves in and takes it to the extreme, but it too often it falls short of its goals to be either funny or poignant. It attempts to push boundaries by having its main character be a plus-sized older woman who gets the hot young guy and finds herself by going back to the time in her youth when her life was derailed. Unfortunately, it does this with a lackluster story that too often serves only as a set up for the jokes.

After dropping her daughter off at her sorority house for her final year of college, Deanna’s (Melissa McCarthy) husband demands a divorce so he can openly continue his relationship with their old realtor. After a small breakdown, Deanna decides to go back to college to finish her Archeology degree, the same college her daughter is now attending. She reveals her plan to her daughter and shares entirely too much information in the process and in a state of guilt, Maddie (Molly Gordon) reassures her that it sounds just lovely. Deanna moves into the dorms and declares herself ready for the full college experience and in the style of Old School, is taken in by her daughter’s sorority after being admired for her sweet but kooky ways.

After attending a frat party at the urging of her daughter and the sorority girls, Deanna finds herself reliving her college years by sleeping with a much younger man and engaging in all kinds of outrageous good times. Eventually, she takes it too far leading to a climactic conflict with her ex-husband where she ends up making a fool of herself and realizes that she has possibly damaged her relationship with her daughter. Despite how detailed this sounds it only scratches the surface of the story and so much of it is used as a set up for poorly conceived jokes that it never feels like the events of the film matter as it is all in the service of the next punchline.

While most of the screen time is devoted to Deanna at college, the strongest scenes in the movie involve the veteran comedy cast of side characters. Unfortunately, they are given very little to do, but when they are on screen they hit every note perfectly. Maya Rudolph continues to show just how fantastic a comedian she really is, her every scene is comedic gold. McCarthy does her best within the limited framework that she has and periodically she is great, but too much of the movie is spent developing dramatic elements to her character for her to really shine. Molly Gordon is stiff and boring, she is never given a chance to show her silly side and is too often placed in the role of caregiver to her own parent for the viewer to be comfortable.

Life of the Party tries very hard to be both funny and relevant to a certain class of women while communicating the message that it is important to be your authentic self but it only occasionally works. It doesn’t shy away from having Deanna admit her own failings as a parent and even shallowly acknowledges how damaging it can be for a child to be forced into caregiving role. But once admitted, the events are easily brushed off and the film moves on to the third act without any reference to previous bad behavior making the admission seem shallow and pointless.

Comedy’s written and starring women are rare and so it is tempting to give it the benefit of the doubt. Melissa McCarthy works hard to provide a different example of womanhood then is so often portrayed, unfortunately, this doesn’t mean her movies work. The plot of Life of the Party often feels like filler that only exists to link the comedic scenes together and consequently everything else about it suffers.