Advertisement
Home News Film ’12 Strong’ is mediocre film that is too weak to be any... 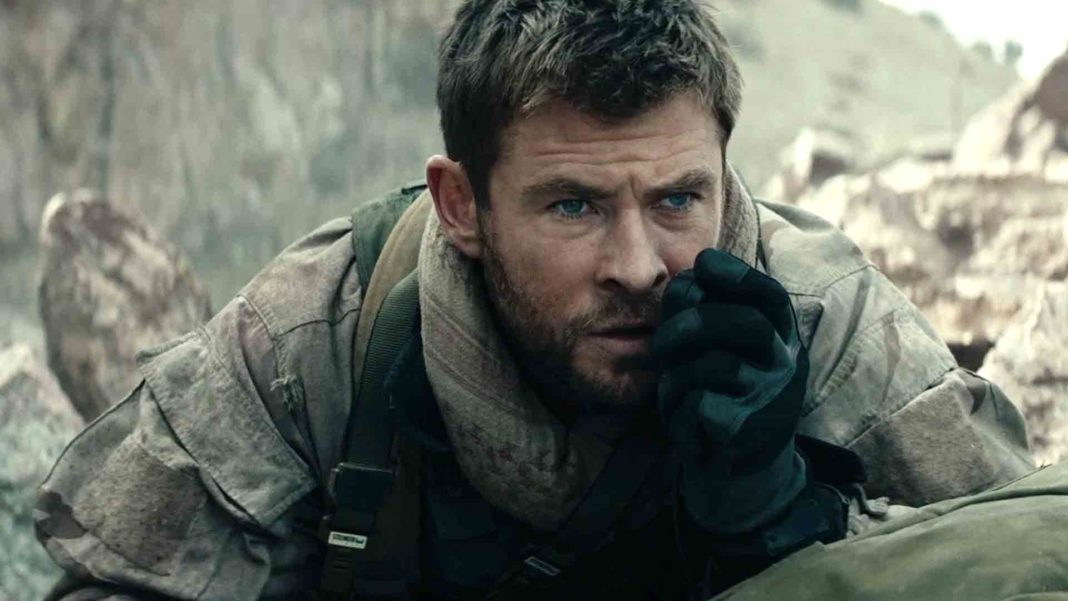 It’s best to start off with the fact that there are no surprises in 12 Strong, either good or bad. It’s an average war movie based on true events that makes no effort to bring something interesting or complex. The success of it will rely on general goodwill towards our troops and the avid war movie fans eager to give this film their money.

In a brief opening scrawl 12 Strong sets the stage as just before September 11, 2001 and then introduces us to its main players: Captain Mitch Nelson (Chris Hemsworth), Chief Warrant Officer Hal Spencer (Michael Shannon), and Sgt First Class Sam Diller (Michael Pena), the three highest ranking members of a Special Forces team. Immediately after 9/11, Mitch lobbies the higher-ups for his team to be sent into Afghanistan as part of the efforts to bring down al-Qaeda and, despite his lack of combat experience, they are accepted. We are then treated to some egregiously ham-fisted scenes of the three men saying goodbye to their families, which also happens to include one of the creepiest smiles Michael Shannon has ever made on film.

The small team arrives in Afghanistan under directions to meet up with General Abdul Rashid Dostum (Navid Negahban), leader of the largest faction of the fractured Northern Alliance, the only viable force to take back Afghanistan from al-Qaeda and the Taliban. When the team arrives, critical of their surroundings and unsure of the loyalty of their hosts, Mitch makes an uneasy alliance with Dostum, who gives them horses to navigate the rough terrain. Mitch and Dostum forge a tempestuous and unlikely friendship as they grapple with enemy forces and each other to find an equilibrium between themselves and their mission. As they and their men get to know each other, the two men find commonalities and begin to work together to defeat the Taliban and al-Qaeda.

Tonally 12 Strong is all over the map, as it moves at a glacial pace that doesn’t match the dramatic action-movie score. However, it does have a cohesive and simple plot, one that hits almost every beat viewers expect, but its characters and story are painted in only broad brushstrokes. The actors do their best with what they are given but all the characters, even Mitch and General Dostum, feel more like caricatures than real people. It makes nods to the deeper issues at play such as the horrors of war and the complex relationships between the different factions in Afghanistan, but it never goes beyond the surface and the attempts ultimately fall flat.

While 12 Strong is based on true events, it never feels real due to how they cut corners when developing the film. What should be an interesting and unique story is instead a long slog through dull set pieces and canned dialogue with occasional bursts of intense action. It’s unfortunate that they chose this event as one for the paint-by-numbers treatment, as there was real potential for a nuanced look at one of the US’s first missions into Afghanistan for the War on Terror. Instead, 12 Strong is a milquetoast and predictable war movie that is much too long and tedious to really be entertaining.