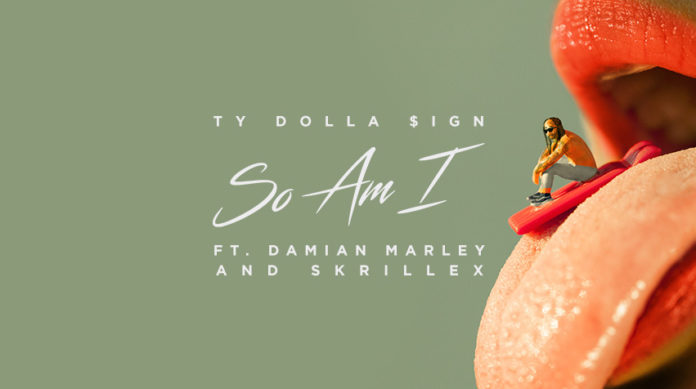 Ty Dolla Sign has been busy this summer. In July he dropped the single “Love U Better” (feat. Lil Wayne and The-Dream); in August he featured on Wiz Khalifa’s track “Something New” and Party Next Door’s “Put It On Silent”; and now, he’s back with another new song. The track is called “So Am I”, and you can stream it below.

“So Am I” features Skrillex and Jamaican reggae artist Damian Marley, and as you might guess, there’s a total mash-up of genres. Skrillex takes on a laid-back reggae beat in his electronic style, and Ty Dolla and Marley alternate the vocal takes. The song details a struggle many of us know all too well: wanting to find a lover that will do things right and stay in it for the long haul, “instead of someone coming home to pick a fight.”

Following “Love U Better”, “So Am I” is the second single to be released from Ty Dolla’s upcoming sophomore album Beach House 3. His first two solo mixtapes were entitled Beach House (released in 2012) and Beach House 2 (released in 2013), so we’re hoping for some serious throwback vibes- and more killer collaborations- on this one.

Beach House 3 is expected to be released later this year through Atlantic Records, although a release date has not been announced. For updates on all things Ty Dolla Sign, keep up on his website.