This may seem hard to believe, but it has been four years since Thirty Seconds To Mars last released new music. In that time the Jared Leto fronted rock band has been busy with other projects, not to mention the occasional live appearance, but all that changed early this morning when a new song titled “Walk On Water” found its way online.

Debuting online via official lyric video, “Walk On Water” finds Thirty Seconds To Mars once again tapping inspiring listeners to rise above the limitations they place on themselves. The track is an inspiring ode to remaining calm in the face of great adversity, which to be fair has served as something of a thematic cornerstone for the group since the very beginning. Still, with a soaring chorus and production that feels made for arenas, this track lays claim to a sonic territory entirely its own. You can experience “Walk On Water” for yourself at the top of this post.

One has to imagine the release of “Walk On Water” signals the start of Thirty Seconds To Mars’ next album cycle, but right now details on the band’s plans for the future remain hard to find. A message released with the single reads:

“Everything you are about to see happened on a single day in the United States of America. July 4th, 2017.

Over 10,000 people submitted footage of a single day including 92 of our professional crews. They filmed across the country in all fifty states plus Puerto Rico and D.C. and captured a portrait of this country that is absolutely beautiful, challenging and unforgettable.

A very small selection of that footage you see here. The rest will be part of a documentary film (directed by Jared Leto) that is a companion piece to our brand new album.

The album. The film. The tour. 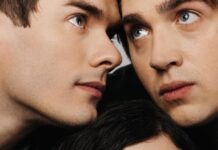