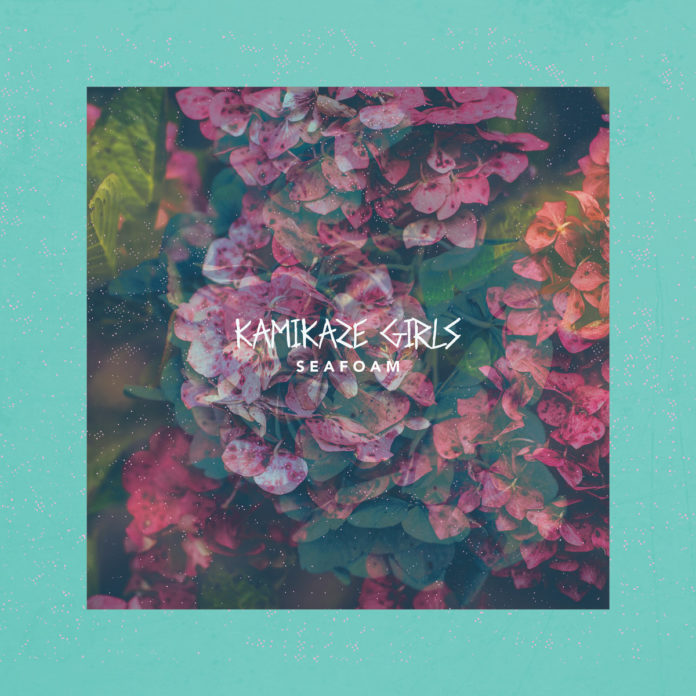 In any creative writing class, there’s a technique known as “showing, not telling” that requires writers to use imagery, description and detail to make their moments come alive as opposed to merely summarizing that scene. However trite, it’s essential advice to writers at all skill levels—and, sometimes, it’s the difference between inadequate and developed writing.

It’s a technique employed sporadically by London’s Kamikaze Girls on their first full-length album, Seafoam, especially on the album’s opener “One Young Man.” Here, sparse chords reverberate around Lucinda Livingstone’s voice as she tells a devastating story: “One young man put a gun to my head / held me down and took my possessions / Ever since, what a state I’ve been / Spend a year of my life doing nothing.” A full breath later, Livingstone’s guitars, suddenly immense and iridescent, careen against Conor Dawson’s stamping drums like something raging, reckless, out of control.

It’s a powerful opening, and sets the tone for the rest of Seafoam, a record that addresses some heavy subjects—depression, suicide, misogyny, apathy, anxiety—all with a brave and barefaced grin. In “KG Goes to the Pub,” Livingstone howls about the sexism she experiences in the club (“Catcall me again one more time / and I’ll knock your fucking lights out”) and the anxiety it provokes. Livingstone’s combative lyrics, buried by her razor-sharp guitar tone and Dawson’s thumping drums, allows the listener to not only know but truly feel the anger, the frustration, the disarray. By contrast, “Weaker Than” features Livingstone alone with her guitar, her voice rising from ponderous, trembling chords. She sings about waking up in the hospital: “I finally recognized what I did / I gave in to it / I gave in to it.” The outcome is eerie and disorienting, but beautiful, especially as her voice rises in volume and intensity during its final, climactic chorus.

Here, Kamikaze Girls succeed where so many shoegaze-inspired bands get lost: Seafoam is dynamic, dramatic, overwhelming—and never boring. For the most part, Livingstone’s guitar tone stays constant. It’s a bright, bleary curtain of sound contained by Dawson’s simple drumbeats. But the band keeps it fresh from song to song by varying tempos and temperatures, moods and melodies. The most powerful songs (the plodding “Good For Nothing” or the slippery “Deathcap,” and especially “One Young Man”) are the richest, featuring layers of melody and mood, and emotional dynamics, especially set by the Livingstone’s vocal dexterity—her bark, as well as her melodic mewl.

It may take until the album’s final call-to-arms “I Don’t Want to Be Sad Forever” to discover Seafoam’s shortcoming, though. It’s there in the verses—“We don’t need more misogyny, we need respect” and “We don’t need more segregation, we need solidarity”—which seem too explicit, too preachy. Certainly, there are pockets of Seafoam where Kamikaze Girls show rather than tell; and, certainly, their expressive melodies help convey the complex emotions in their music, but too much of the album’s lyrics tell us about these struggles rather than taking our hand and walking us through them. It happens again in the chorus, when Livingstone sings, “We need to face this together, and we need to face this now / I don’t want to be sad forever, but I know that I probably will be.”

That last line, perhaps, feels most disheartening of all; after all of Seafoam’s struggle, instead of a satisfying resolution—some progress, if not an escape from the devastation in which we started—we’re left with a sigh of resignation. But maybe resolution is not the reality of anxiety, of depression, of struggle. And maybe that’s what makes Seafoam such an important record in 2017—instead of sugarcoating the story and lining it with silver frosting, we’re left with something more true, more honest, more urgent, served with a brave and barefaced grin.

TOP TRACK: “Good For Nothing”