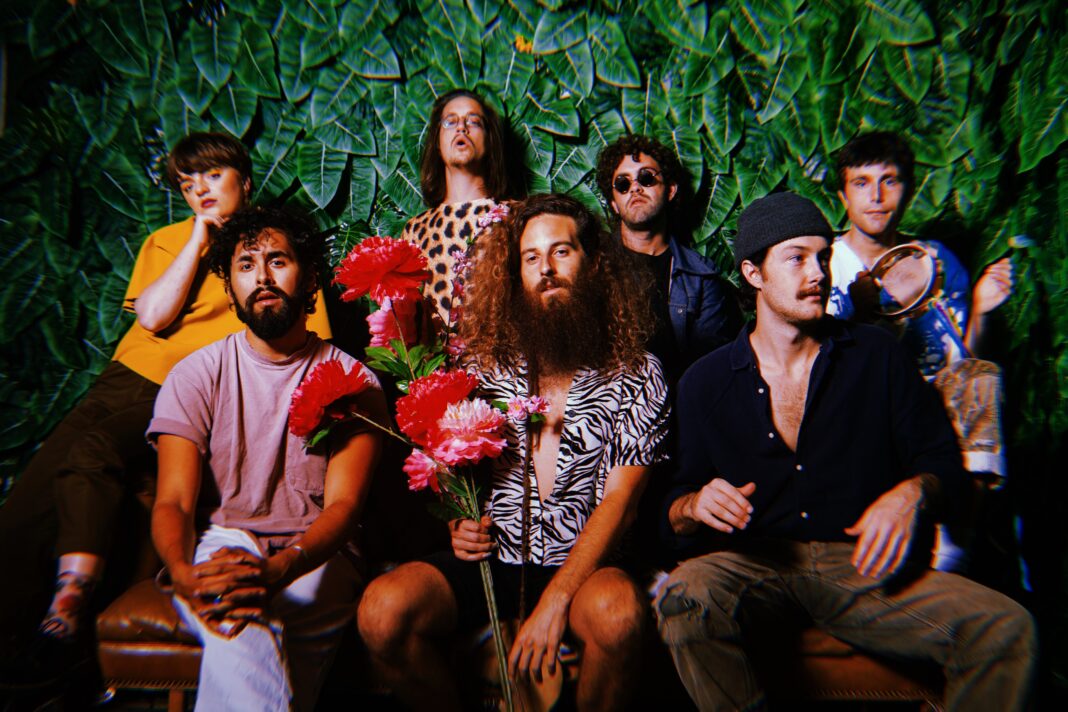 Hailing from Topanga, California, Hello Forever is an up and coming band that serves more as a self-described art pop collective. The band is lead by eccentric songwriter Samuel Joseph, and they live together in a unique situation: living in the secluded, abandoned grounds of a 1960’s nudist commune.

The collective that is Hello Forever finds Molly Pease, Andy Jimenez, Jaron Crespi, Joey Briggs, Gabe Stout, and Anand Darsie joining Joseph in this musical endeavor. They all met through various activities around Los Angeles: club shows, meditation retreats  beach bonfires, and more. Together, the members are what makes Hello Forever such a special project for listeners, with their chemistry shining through each track.

This chemistry and experience comes from  rigorous 5-day-a-week rehearsal schedule, as this allows them to perfect and hone in on the sound they want. The result is one that has some of that throwback sounding California style, reminiscent of seminal mid century vocal groups.

The debut album from Hello Forever, Whatever It Is, is a shining example of that — a reimagine of sorts of that West Coast pop vernacular. It’s a refreshing renaissance of sorts, combining modern influences with classic sounds of jazz, folk, R&B, doo-wop, and many more. It’s an album that Joseph recorded over the course of 200 days, having been done in bedrooms and borrowed studios in Santa Monica and Castaic. The process was truly elaborate, as he was set on working around the clock, and would even sleep under the control desk to fully immerse himself into the process — and all of that comes through musically for Hello Forever.

Substream is excited to be teaming up with Hello Forever to bring another layer of their collective to life: a music video for “Colors in the Sky.” Regarding the single and video, Joseph tells Substream, “‘Colors in the Sky’ is a true story. I wrote it after I took a walk to the store up the street, and I ended up talking for a long time to a neighbor I hadn’t met before. We talked a lot about challenges in our lives, and wondered why some things have to hurt so much. Sometimes there’s not really an answer. Which can hurt more. But sometimes there’s like a zen apathy we can bring to accepting our pain as much as we can even when we don’t understand it.”