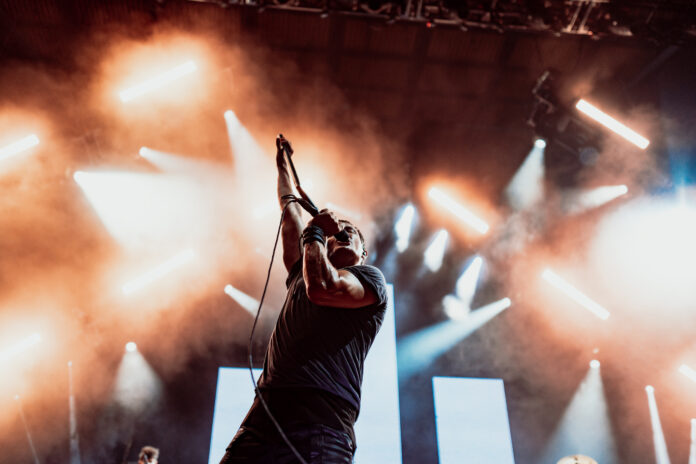 The evening was during a week of extreme heat wave in Columbia, Maryland. With sun shining through the newly-upgraded lofts at Merriweather Post Pavilion, the audience was feeling the heat in more ways than one. Ra Ra Riot played as the sun set and created the perfect summer outdoor concert environment. Jimmy Eat World combined their stage lighting with the golden hour of the sun setting to generate warm, fiery vibes. Everyone was toasty but anxious for Third Eye Blind to begin.

Their intro song was played from behind a curtain that filled the stage. With spotlights behind the musicians, frontman Stephan Jenkins emerged and immediately embraced the band in a group hug. The crowd was cheering and shouting in excitement. Then, the curtain fell, the stage was set, and Third Eye Blind played just as well as always, giving the crowd exactly what they asked for.

They played a mixture of older and newer songs, opening with their most recent song “Screamer” and mixing some medleys in between full songs. Reminiscent of the 2017 Summer Gods Tour, the bands provided the same level of energy as always and engaged fans, old and new, during the whole set. Third Eye Blind ended the show with an encore, performing “Ways” from their latest release and two classics from their self-titled album: “Semi-Charmed Life”, and “Losing a Whole Year”.