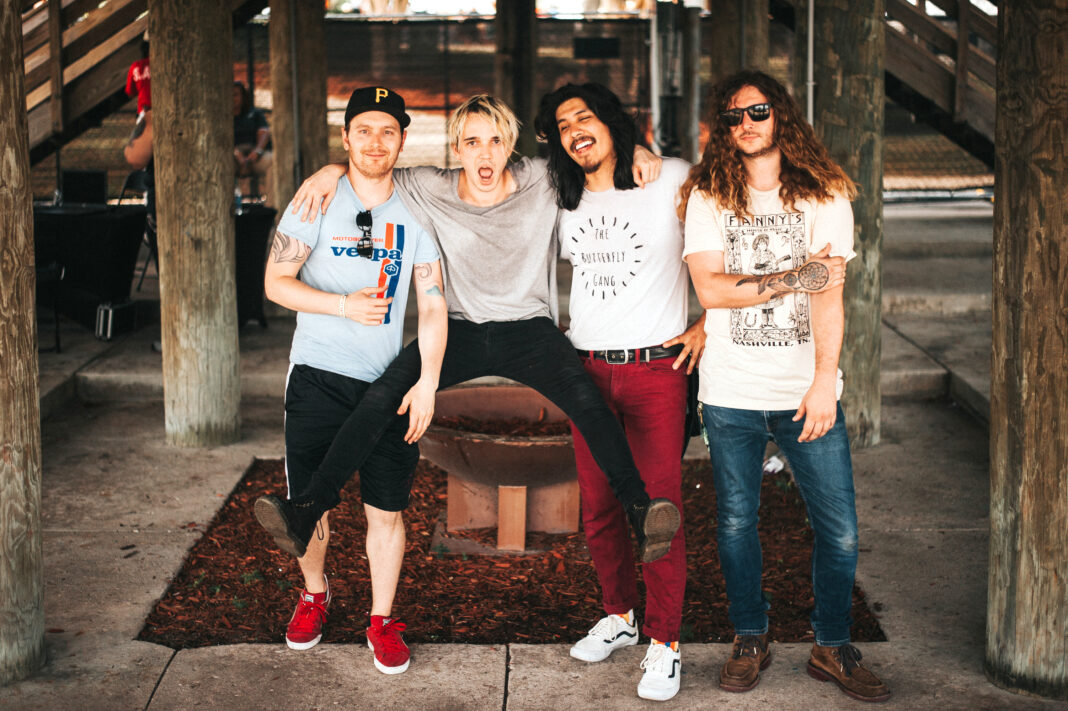 Badflower has had quite the meteoric rise. The band — comprised of members Josh Katz (vocals, guitar), Anthony Sonetti (drums), Alex Espiritu (bass) and Joey Morrow (guitar) — just released their debut album, OK, I’m Sick, earlier this year, and have accomplished things few bands do with one album. The band has had massive support tours (including Shinedown this summer), and two number one singles on the Billboard modern rock chart: first with “Ghost” and “Heroin” following more recently to hit that position.

It’s been an impressive debut run, and Badflower show no real signs of slowing down. Their touring schedule has been relentless and impressive. They’ve been playing at bigger and bigger festivals, most recently being Epicenter Festival, Welcome to Rockville, and Sonic Temple Arts + Music. The latter is where Substream was able to catch up with Badflower again, to chat about their debut album, their processes, and where they go from here.

So it’s been a busy year for you guys. You released your debut album, OK, I’m Sick, and essentially have been on the road non stop. Now you’ve been doing some big rock festivals, how would you summarize this year so far?

Anthony: Busy, and where are we right now?

For all of your accomplishments, the record, the big singles, the festivals, what’s your favorite thing o happen so far?

Alex: My personal favorite have been the festivals. It’s really cool to see people come out so early to come watch our set and stay for the whole thing, and the crowds keep getting bigger and bigger. Now we’re getting crowd surfers, that’s like a regular thing — and to see Santa Claus and Jesus and unicorns all crowd surfing, it’s really amazing.

Anthony: I’d say…we were just in Germany six weeks ago and a few other places in Europe. That was a really fun one. The shows were awesome, because we haven’t played in some of these places yet, so they were smaller and more intimate. And these festivals. We did a tour in March and it was a lot of fun, we all like took turns getting sick on the road, but now the weather is getting nice so it just feels fun.

This album brought you a #1 single with “Ghost” and then another hit with “Heroin” — for a debut album, that’s not too bad huh? How’s that feel for your debut album?

Alex: I mean, it’s something you think about when you’re 13/14 and starting a band. So to actually see the first number one was astounding, and to see the second number one, that’s just as cool. It’s a big landmark for us, I believe, and it only got there because it’s really connecting with people, so that’s special.

Anthony: Sometimes I feel like; they are things that you dream of as a kid, but when they actually happen in real time — we’ve been so busy during it all, like, sometimes for me I don’t even actually take it in until I’m laying in bed and I’m like “Oh, that is really cool” when you start to go through that. Because in the moment, it’s just happening so quick.

Yeah because you’re often doing something else, so it eventually hits and you’re like “What the fuck is that?”

Anthony: Yeah, we got off stage today and within 10 minutes, we were at our first interview. So I haven’t even taken today’s performance in yet.

Alex: Yeah, and the more number one’s, the busier you are.

Yeah, so that’s not too bad. It’s better than getting off stage and no one gives a shit right?

Do you guys remember where you were when you first heard that “Heroin” went number one, marking your second number one single?

Anthony: Pretty recently, actually. We’ve had an older version of it on the radio before, but it was only on for two seconds.

Alex: This time around, I was eating [Anthony] Sonetti’s leftovers. It’s not as romantic as you’d think. But that’s how touring is.

The album has garnered Badflower a lot of attention and a ton of praise. One of the most notable things is that people enjoy your utter and complete honest with your lyrics. You don’t really shy away from anything and tackle things head on. Songs like “Ghost” and “Daddy” come to mind for me as some of the darker ones. Is there any topic that’s like, hard to write about?

Anthony: Well, Josh writes the lyrics. I did an interview with him recently and he pointed out the song “We’re in Love” was difficult because the topic of the song changed over time from what it was. I think that was the last song he finished vocally in the studio, but it’s funny because the instrumentation of it had been around for a few years, we just never turned it into something.

So your writing process is very different then. In the sense that there’s no set way of writing lyrics or music first.

Alex: Yeah, whatever we catch out of the air. Usually Josh does hide away in his room and write the lyrics. Musically, I think it’s that we all get in the room and go for it.

Anthony: It varies from song to song, too. Sometimes Josh will come up with a demo that has pretty much everything there, and we’ll each get our say in something, but if it’s good, it’s good. If a drum beat works, I’ll be like “Hey, that’s cool.” Sometimes I’m like “That’s not something I would have thought of, but that’s cool.”

I think it’s probably good that there’s no routine, right?

Alex: Yeah, once the routine sets in, it starts to feel like a job and then you’re uninspired. Then you get fired from your job because you come in late. So we try to not keep a routine.

Anthony: Well like, “Daddy” was done in the room together playing the music part first, so you know, it just goes how it goes.

Lyrically, I know the would be a question for Josh. But, musically, your sound is very diverse and different for most current bands on rock radio. So Where do you draw most of your influences from?

Alex: I think we all rely on each other really heavily, for the bands we’re listening to at the time, or the song that Josh heard on the radio, whatever it is. We have to draw from each other to make it all work.

Anthony: If you literally took everyone’s headphones and put your ears on them, we’re all gonna be listening to something completely different. So it all just kind of melts together to make our songs. And also, I know Josh gets influenced by music schools that don’t even talk about rock music. It comes from anywhere.

Alex: We all went through a Tears for Fears phase for a second. It’s just — it’s everything.

Anthony: We love playing our instruments, so it comes out as rock and roll because it’s like, you know, there’s electric guitars, bass, and drums but — personally, the last two weeks I’ve only been listening to 90’s R&B from my childhood. It doesn’t sound anything like us, but as a drummer, I draw heavily from that because I love grooves and it just feels good.

I think most people, maybe most music fans would be surprised in terms of what their favorite musicians listen to. Or where, as a creator, you can draw your influences from. It’s not just listening to the radio, or one genre of music.

Alex: Yeah, I think you just sell yourself short [doing that]. We like art, we like good art, and you can find that everywhere.

So you’ve been touring non-stop for a long time now, basically, and you’ve got a summer tour coming up as well. You’ve done all kinds of club tours, festivals, bigger summer shows, do you prepare for these different shows the same or different?

Yeah, it’ll be cool to get back into “regular” shows, I’d imagine. Obviously this beg festivals are fun, but like you mentioned they’re so busy. I’d imagine this summer tour will be more of a routine.

Alex: Yeah, a little more scheduled. It has to be.

Anthony: It’s gonna be cool though, because the Shinedown tour that we’re doing — it’s the summertime, so it’s outdoors. We’ve never done an outdoor tour before. We still tour in hot, sweaty clubs in the summer typically if it’s our own shows. So that will be fun.

So obviously this new album just came out and it’s still early, but have you through about what comes next from this and where you from here?

Anthony: Nothing’s been done, but it’s been —

Anthony: Yeah, there’s been conversations about it. The album just came out so we’re pretty busy with that, but I would imagine next year during a break we’ll be going into the studio and starting something one way or another.

Yeah the singles are doing really good right now, obviously, and that’s a part of it, I’m sure. You don’t want to wait like three years between albums or anything.

Alex: Yeah, we don’t want to do that.

Anthony: We like being home, Like, I have a daughter, we all have families and stuff, but we love to record so we don’t want to get too far from that as well.

It’s just a balance, really juggling all of it.

Alex: Yeah, it is. I don’t wanna get too into it, it’s hard. It’s a deep subject because there’s so much of us that we give out on the road and to every fan, every show, you want a little bit of your sanity back when you get home. But, you don’t want to take too long.

Anthony: I feel like, too, if this were 40-50 years ago, we would have thrived in that environment. Back then, bands would put albums out — it’s like, Led Zeppelin put out their first two albums in a year. A lot of bands did that, where they’d put an album out in January and then another in October. That’d be awesome if it was still like that, but it puts a lot of pressure on you, too.