Advertisement
Home Reviews Film Reviews ‘War for the Planet of the Apes’ is one of the best... 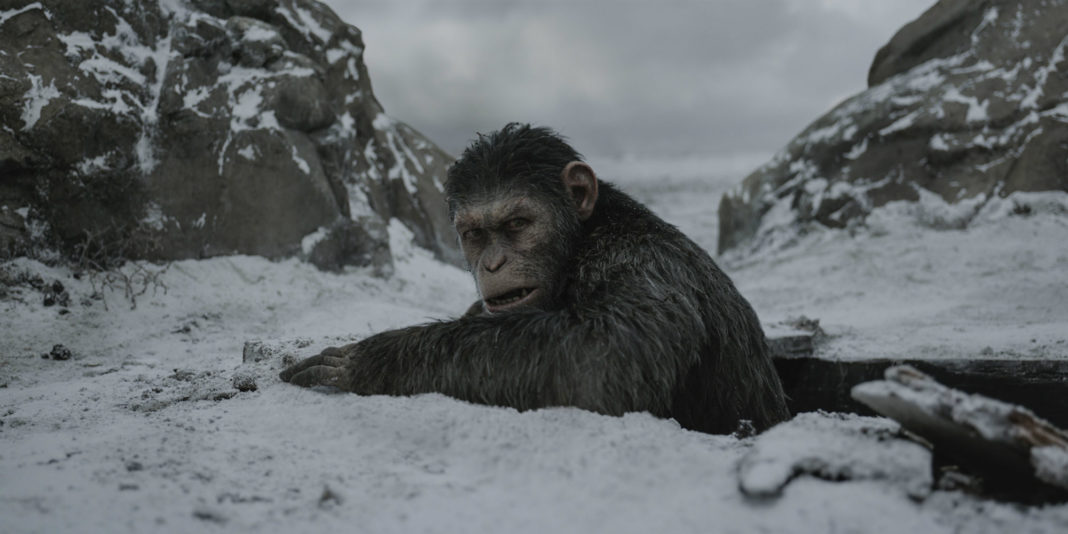 It is quite possible that 2017 will go down in history as the year a summer tentpole was a serious contender for Best Picture at the Oscars. War For The Planet Of The Apes, the grand finale in a trilogy that started with James Franco and a desire to make the world a better place in Dawn of the Planet of the Apes, is one of the greatest films to receive a wide release in recent memory. It is a testament to everything we love in cinema, fantastic escapism with a powerful message at the time it most needs to be heard. Matt Reeves may go on to create many more great films, but it seems here the criminally underrated filmmaker has more than earned himself a place amongst the greats.

Taking place just a few short years after Rise of the Planet of the Apes, War opens on Caesar (Andy Serkis) and his community being discovered deep in the woods by a team of soldiers hunting for the famous leader. Their capture reveals the news that a new villain known only as The Colonel has set to slaughtering what remains of the ape population. The apes attempt to make peace, offering the soldiers their freedom in exchange for telling their of they kindness they’ve been shown, but a traitor amongst the community soon leads armed forces straight into the heart of the ape community.

With his home once again invaded and dozens more dead, Caesar passes a breaking point that tests everything he has built his society upon. The leader who has previously sought peaceful resolution at every turn begins to entertain more violent notions, and in doing so has a crisis of self that serves as the emotional core to the film. His every fiber seeks vengeance, but the more he allows such notions to run rampant in his mind the more he sees himself giving in more and more to his primal instincts. In doing so he is forced to ask himself whether or not he and Koba, the antagonist from Rise who lead a rebellion against Caesar and kickstarted the event of this film, were ever all that different.

If the goal of the franchise has always been a message of understanding and the need to push petty differences aside whenever possible then it has never been better realized than in the decision to make us live this particular chapter through Caesar’s eyes. Where earlier franchise films tried to balance the ape and human narratives to better explain the motivations behind each side’s response to the events of said film, War chooses its side up front and sticks to it. The benefit of this is a greater exploration of the ape culture, as well as a far deeper appreciation for Caesar and the other community leaders (Maurice has and always will be the true glue that holds everything together, and that is more true than ever here). You’re rooting against your own species before you even realize it. Not because every one of them is a villain per say, but because you see how fragile we can be, and how our fear of having that fragility expose can lead us to do horrific things.

The one thing War for the Planet of the Apes lacks is dialogue. The series has had less and less spoken dialogue with each film, and it is retrained further yet with this film. The apes do still rely on sign language, but even that takes a step back to the score and the sound of the environment. This allows for what little dialogue does exist to land with dramatic heft, especially in the scenes where Caesar is facing off against the unhinged Colonel (Woody Harrelson). Each has thought their view through so thoroughly that the devotion they have to their individuals causes cannot be shaken. The can communicate, but only to the extent that each reaffirms a stance the other opposes. With all options for amicable resolution trashed before their first meeting even happens, the options for reaction are limited to just violence, which in turn causes each to reflect on the paths they taken.

Harrelson’s work as the Colonel really cannot be overstated. He may be the only actor on the long list of notable names and faces who have stood opposite Serkis’ Caesar in this franchise and held their own. There are glimpses of roles we’ve seen before, but the majority of what most people consider to be Harrelson’s schtick is nowhere to be found. Colonel does not laugh or crack jokes, nor does he raise his voice unless he deems it absolutely necessary. He’s a calm and resolved man plagued by tough choices made in the heat of the moment, yet when needed he can tap into a pitch black corner of his soul and loose a depraved kind of evil on the world. With a little more power or a lot more followers you might think him a world leader in the making, but instead he’s a mad man ruling over an abandoned prison camp he sees as paradise. Apes are the only thing, in his mind, that stand between him and being the greatest man on Earth.

The casting choice everyone will be talking about is Amiah Miller, who steals numerous scenes without having a single line of dialogue. She portrays, an orphaned child that Caesar and his crew discover while in pursuit of Colonel. Through Nova’s presence in the story both the audience and Caesar are reminded about the good side of humanity, as well as the fact that our differences are largely minimal in the grand scheme of things. We all need the same basic things to survive, and we all depend on one another to get through this journey called life. When one is in need those who are able step up, or at least they should, and in a film built around war that is a powerful message to instill in the viewer.

The one other new face worth mentioning is Bad Ape (voiced by Steve Zahn), a bit of heartwarming comic relief in the form of an escaped former zoo animal who possesses the ability to speak like Caesar, but next to none of his intelligence. After entering the fray in the midst of the second act Bad Ape quickly becomes a predominant character that helps further tie the audience to the plight of the apes by doing more than most to look like us. Bad Ape wears clothes and gets complains about the cold. He also fears practically everything. Zahn’s voice work makes the character come across as adorable against a film that is the furthest thing from cute, yet somehow it gels nicely. Kids will no doubt be imitating Bad Ape for the next several months and I, for one, look forward to it.

They say war is hell, but War for the Planet of the Apes may just be the best movie of the summer, if not the entire year. Everything about this story works, from the initial motivations behind every step to the final beats, and it is all brought to life through incredible performances delivered in a familiar world enhanced by eye-popping CGI. We live in an age where every movie becomes a franchise and most franchises become extended universes, but here we have a remarkable series unlike anything else at the box office right now taking its final bow while at its peak. This is as good as it gets folks, and though you know you will miss this amazing Planet you are ultimately thankful for having simply been alive at a time and in a place where you could bare witness to such profound storytelling as it unfolded. Another reboot may one day come to pass, but this trilogy is one we will be celebrating for years to come.