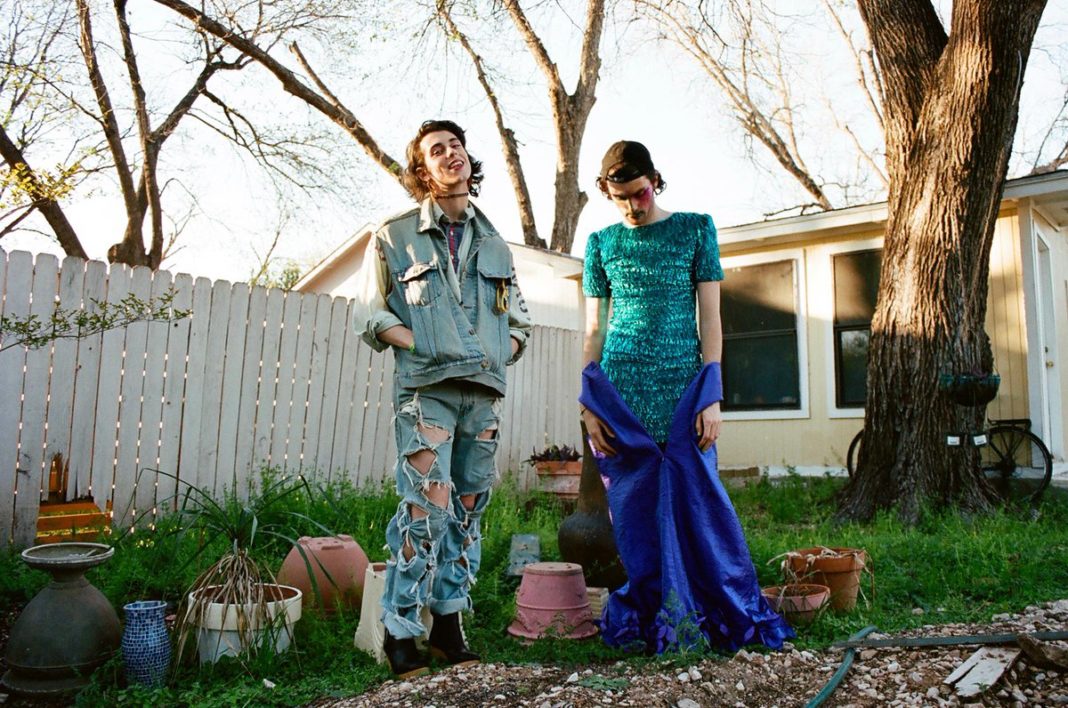 UPDATE #13: The upcoming PWR BTTM headlining tour has officially been cancelled. The new was confirmed by Off Broadway Music Venue with a message that reads:

“This just in: PWR BTTM is cancelling all upcoming shows until further notice. The band will be making a formal statement early next week.”

UPDATE #12: Big Scary Monsters, another label associated with PWR BTTM, has announced they will no longer be selling the band’s products.

UPDATE #11: Polyvinyl Records has now issued a statement of their own. In it, the label announces it will no longer be selling PWR BTTM’s new album, Pageant, which was released on May 12.

UPDATE #9: Salty Artist Management has dropped PWR BTTM as a client. “In light of the allegations involving members of PWR BTTM, Salty Artist Management will no longer be working with the band,” Salty said in a statement posted to Facebook Friday afternoon. “We do not take these kind of allegations lightly and our thoughts are with victims and survivors of abuse who have been affected by this.”

UPDATE #7: Tancred, who was due to tour with PWR BTTM later this month, has also cancelled all upcoming performances with the band.

UPDATE #6: Jezebel has an exclusive interview with an alleged victim of Ben Hopkins, who describes on incident she had with Hopkins in graphic detail. The site has also heard from the band’s manager, Jeanette Wall, who in an email said she did not know about the assault claims prior to yesterday, writing that she has “not been contacted by anyone close to the victim or been made aware of any details listed here.”

UPDATE #5: Bled Fest organizers have announced that PWR BTTM has been dropped from their festival lineup. A full statement explaining how they came to this decision, as well as their plans to fill the band’s spot on their lineup, can be read below:

UPDATE #4: Cameron West, a musician who has been working with PWR BTTM in recent months, has stated he is “hereby ending [his] tenure with the band as an arranger and touring musician.” He also claims the accusations against Hopkins “were in fact levied via e-mail months ago, but were left unshared with other members of the band.”

UPDATE #3: Nnamdi Ogbonnaya, the other artist scheduled to open for PWR BTTM this summer alongside T-Rextasy, has also backed out of the entire tour. A statement can be read below:

UPDATE #2: BrooklynVegan is reporting that PWR BTTM’s record release show, originally scheduled to happen tonight at Rough Trade in New York, has been cancelled. The event is listed as cancelled on the venue’s site, though no official statement has been released.

UPDATE #1: Our friends at Upset Magazine, who just released an issue with PWR BTTM on the cover, have commented on the accusations and how they will change their marketing. You can read the full statement on their website. Here’s an excerpt:

“However, yesterday news reached us of accusations made against the band’s Ben Hopkins. Though a statement has since been made, we’re uncomfortable running coverage of the band at this point. In light of this, we feel it’s important that, as a magazine, we don’t simply attempt to pretend nothing is happening and carry on regardless.

As a publication, we believe we have a responsibility to take accusations seriously. Generally, in this situation, we would cease coverage of an act. If we felt the situation was resolved satisfactorily, we would consider resuming our coverage. If we didn’t, we wouldn’t. Every situation has its own nuance, but we strongly believe in protecting that platform to the best of our ability.”

ORIGINAL POST: A day before their debut release for Polyvinyl is due to hit stores, the members of Annandale-on-Hudson, New York punk band PWR BTTM have found themselves embroiled in controversy.

On Wednesday night, a Facebook user by the name of Kitty Cordero-Kolin posted a message to the DIY Chicago group accusing PWR BTTM member Ben Hopkins of multiple sexual assaults and predatory behavior. Cordero-Kolin claims to have “personally seen” Hopkins “initiate inappropriate sexual contact with people despite several ‘nos’ and without warning or consent.” The user also shared a photo of Hopkins smiling while posing next to a swastika he had drawn in the sand.

friendly reminder to stop letting PWR BTTM use their status as “allies” to do whatever tf they want pic.twitter.com/ESbXur7zpx

The post continued to spread online throughout Thursday, with additional people coming forward to share stories and rumors they had heard over the years. Among them was the band T-Rextasy, who were due to go on tour with PWR BTTM in July. They wrote: 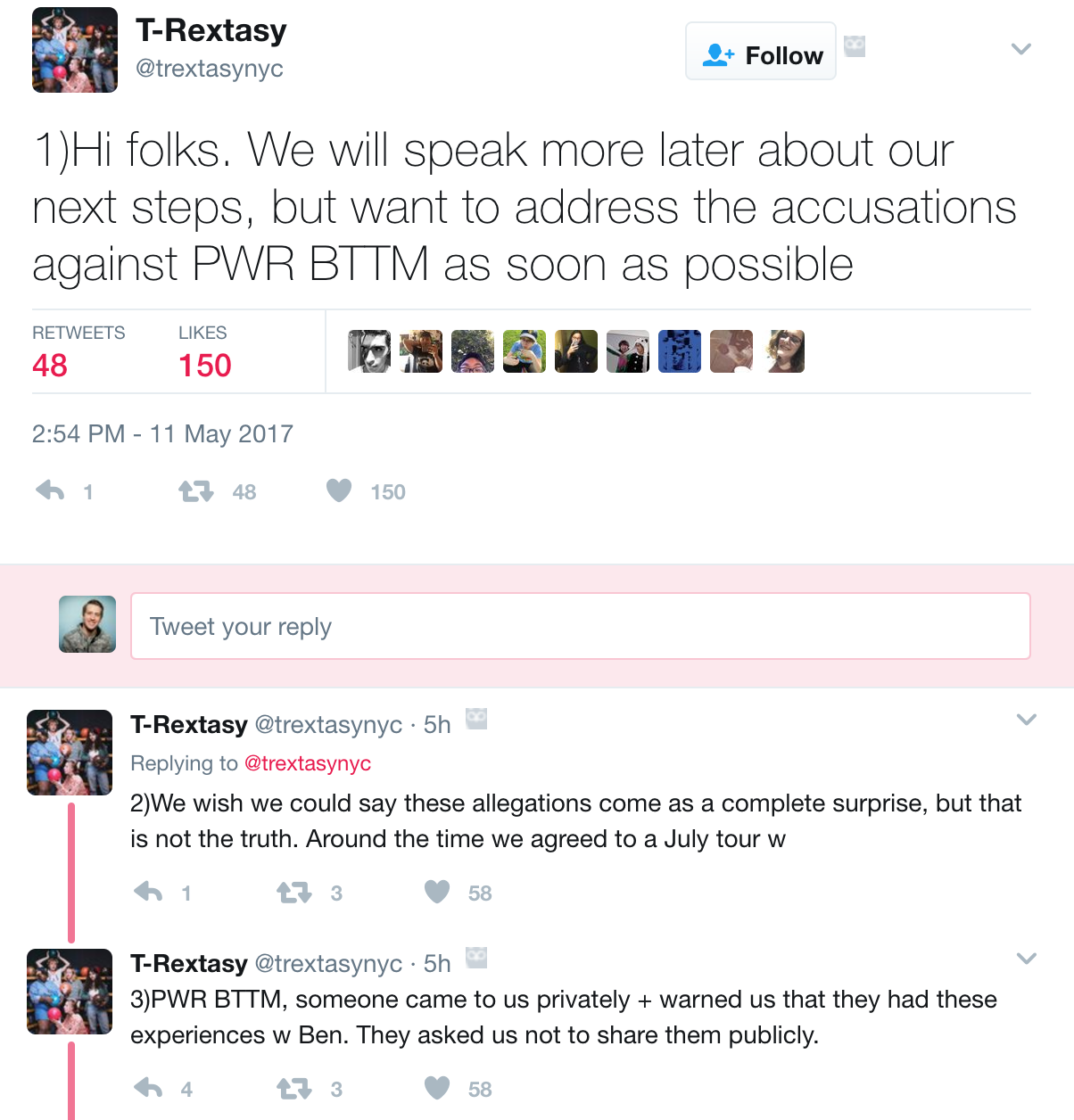 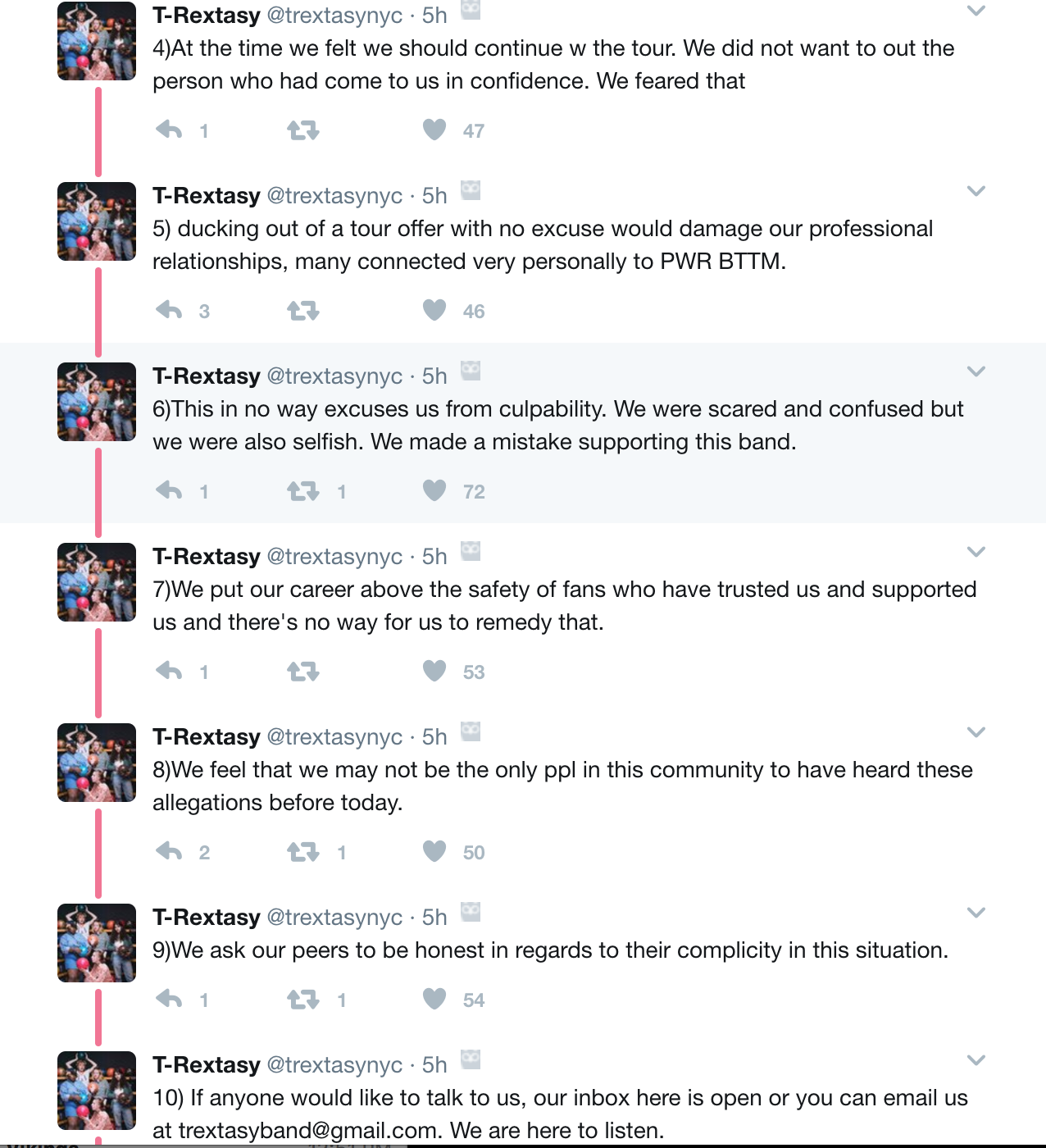 PWR BTTM released a statement in response to the allegation late Thursday afternoon via Facebook. In it, the band announces plans to establish a way for people to come forward with their stories. The full post reads:

Ben and Liv here. We want to respond to some very serious allegations that have been made against Ben. The allegations come as a surprise, but we are trying to address them with openness and accountability. With respect to the image included with these allegations, Ben previously addressed this matter on their/the band’s Twitter in January (https://ibb.co/dsNRRQ).

Unfortunately we live in a culture which trivializes and normalizes violations of consent. There are people who have violated others’ consent and do not know. Ben has not been contacted by any survivor(s) of abuse. These allegations are shocking to us and we take them very seriously. Further, the alleged behavior is not representative of who Ben is and the manner in which they try to conduct themselves.

To address this matter head on, we have set up an email address through which a survivor or someone working directly with a survivor can discuss the allegations being expressed on social media: [email protected] We are currently looking for a mediator with the necessary qualifications. This will be the only person with access to the account. Ben does not have access to the account, for two reasons: 1) because we acknowledge that certain individuals will not feel comfortable establishing a direct communication link between themselves and Ben, and 2) to protect Ben in the event that a malicious party attempts to use the address for anything but its intended purpose.

Our primary goal here is to ensure that a survivor of abuse has a voice, that their story should be heard and that people who cross the line should be held accountable. What this means for the band, our album, our fans and our upcoming tours is, as of yet, unclear. Music is everything to us, but we feel strongly that this matter needs to be addressed first. Updates forthcoming.”

Some have criticized PWR BTTM for asking people making allegations against them to use an email the band established to have their voices heard. Others feel the band is taking a step toward accepting responsibility for any wrongs that may have been committed.

As of right now, all PWR BTTM plans for the immediate future are still scheduled to happen as planned. We will let you know if anything changes. Follow Substream on Twitter for updates.