Missouri indie rock band Me Like Bees just kicked off a tour with Never Shout Never and Hundred Handed. Throughout the run, the band will be reporting in to Substream with journal entries and photos from their time on the road. Below is their first entry.

Today was our first official show on tour with Never Shout Never and Hundred Handed. Boy was it great! It was in Tucson, Arizona and the temperature was around 110 degrees (but don’t worry, it was a dry heat). We played a hometown show in Joplin and Boulevardia festival in Kansas City to help us make the 18-hour drive from Missouri to Arizona.

I woke up yesterday feeling pretty crummy, but I put on a happy face and volunteered to do the first leg of driving. I then took some Nyquil and woke up 12 hours later in Arizona.

The first thing I noticed about Arizona is how tall their plants grow. The house we are staying at has palm trees and bushes that are four times as tall as the house. The second thing I noticed is how badly it hurts to be outside. This is going to be a toasty tour!

We took a nap before heading to the venue to hug the boys in Never Shout Never and meet the dudes in Hundred Handed; such sweet boys. There were some technical difficulties setting up, so Jake (our merch guy) and I went to get some ice cream! It was made at this place down the street from where we played, called The Hub. I got oatmeal cookie dough and Jake got lemon.

Then we went to the farmers market for some fresh, roasted green chilies. I love green chilies and cannot find them anywhere back home. It really made the trip!

I managed to close my cell phone in the van door while I was changing for the show. What a bummer! It actually bent the phone into a “U” shape. It stabs me when I swipe. What a betrayal. We’re going to try and fix that tomorrow.

We went on stage around 8pm at The Congress Club. It was such a fun night! The kids were really fun and seemed to like us. It was still very hot, but they still danced along with us. Hundred Handed and Never Shout Never both killed it with stellar sets. Taylor [MacFee, NSN] came over to our merch table afterwards and we all danced to ’90s rap songs. They just don’t make them like they used to.

We’re off tomorrow and plan on going swimming. Hopefully it isn’t 110 degrees again or we may cook! The next show is in Albuquerque, New Mexico (Fun Fact: That is where I was born). Luke will write about our experiences there! 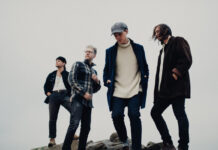