Chase Huglin and Candy Hearts are currently out on the Summer Series (A Petite Mansion Tour), which kicked off in Cleveland, OH on June 16. Throughout their time on the road, the bands will be reporting in with notes and photos documenting their experiences.

Tour is going extremely well so far! Between playing at small venues to playing a literal mansion, this tour has been a blast!

On this tour I’ve been experimenting playing three new songs, in hopes to familiarize the crowd with new songs that are going to be coming out later this year. I’ve been playing songs from my Glow EP every night as well. It’s always humbling to play in a town I’ve never been to and have people chant my lyrics with me.

We’ve explored cities like Nashville and went to Third Man, and I recorded a 6-inch vinyl record in a recording booth machine that cuts to vinyl directly. There are only two left in the United States. It doesn’t sound incredible, but it’s always cool to hear your voice on vinyl.

In Nashville, we did some cool things like going to Grimey’s record store. I’ve been meaning to pick up Julien Baker‘s release for quite some time now, and I’m super excited to add it to my collection! We also went to a super-vintage Gibson guitar store in Nashville and I played my dream guitar, a $20,000 guitar apparently originally owned by Brian Wilson of The Beach Boys.

Once we hit the South, everyone including myself couldn’t wait to get to Cook Out. Being from the Midwest, it’s always a treat when I get to enjoy this tasty (and cheap) meal.

Hope you can make it out to this tour! 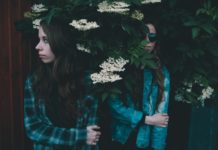 A Day In The Life of Courage My Love

Me Like Bees tour journal #3: “‘Pokémon GO’ became the glue that bound the tour together”