Los Angeles trio Vow earned a lot of attention recently with the announcement that Touche Amore guitarist Nick Steinhardt would be joining their ranks. But don’t think the band’s debut LP, Kind Eyes, shares much in common with Steinhardt’s day job. Vow’s sound exists comfortably in both the shoegaze and synth-pop spectrums, with frontwoman Julia Blake’s breathy alto vocals adding depth to their pulsating arrangements. Today, we’re debuting “Lowest,” one of the best tracks from Kind Eyes. Multi-instrumentalist Andrew Thomas elaborates on the song’s creation:

“Having the ability to write and record all on our own and send ideas to each other remotely has been the way we’ve done Vow since the beginning, but since our schedules all started to line up toward the end of making this record, this was the first song we had the opportunity to write all in the same room, and that definitely brought out a different side of all of us. ‘Lowest’ is the culmination of that retrograde growth we’ve had as a band and returning to a tried and true classic style of music making. It’s been a rejuvenating change for us.”

Vow’s Kind Eyes will be released May 27 via the Native Sound and can be pre-ordered here. 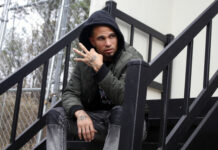