UPDATE: A GoFundMe page has been created to help cover the costs of sending Jon Bunch’s 12-year-old son Jack to college. Donate here.

Jon Bunch, former frontman of ’90s emo band Sense Field and later the singer of Further Seems Forever for their third album, Hide Nothing, has passed away. He was 45. His death was announced via a post his Facebook page which reads, “With broken hearts and so much difficulty, we write these words to all of you who love Jon. He is no longer with us now. We think his life here ended early morning, Feb. 1, 2016, but it is uncertain at this time. Our love, his family.”

Substream has confirmed his passing with Bunch’s publicist, but no other details have been made available at this time.

Bunch’s musical career started off at age 16 when he fronted hardcore band Reason To Believe, which later morphed into Sense Field. Sense Field got their start on legendary indie label Revelation Records before eventually being picked up by Warner Bros., however their lone album for WB, Tonight And Forever, was stuck in contractual limbo for a half-decade. The band eventually was freed from their contract and a re-recorded version of Tonight And Forever was released via Nettwerk in 2001.

Bunch then went on to be the third singer for emocore stalwarts Further Seems Forever, performing on their third album Hide Nothing and its subsequent tours until the band broke up in 2006.

Our condolences go out to the family, friends and fans of Jon Bunch. 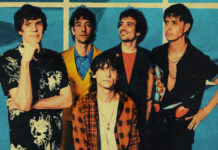