The internet exploded last night when Bring Me The Horizon dropped their new single, the industrial-tinged “Happy Song.” The track is currently No. 1 on iTunes’ Rock chart, and plenty of folks are asking about when the band’s new album may drop. Well, we’re still unsure of a release date, but we can confirm that Epitaph Records will not be releasing it—while the band were previously signed to Epitaph in America and RCA Records globally, now, BMTH are officially, 100 percent on a major label, as Columbia Records will handle the release domestically. BMTH’s last release, Sempiternal, has sold 279,000 copies domestically and over a half-million copies globally since its 2013 release. You can hear “Happy Song” below, as well as check out the band’s upcoming U.S. festival dates. 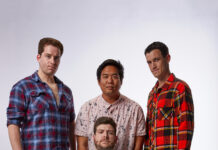