In case you missed it last week with Thanksgiving shenanigans, The Word Alive have unveiled their new music video for “The Runaway,” a track off their latest album Real, which was released in June via Fearless Records.  The band posted the video on their Facebook with a message. Check it out below along with the music video.

“At this point in our career we felt it would be cool to showcase what gave us our start getting into music. The stories of how we got our start aren’t that dissimilar from many of our fans getting their start currently.

I wrote the majority of the treatment which was a new experiment for us. We wanted to put out an idea and have directors come to us with their adaptations of our plan. It just so happened that we felt the person most passionate about the process was Jeremy Tremp.

Jeremy has filmed many videos for Luke as well as a “Getting To Know The Band” video for us a couple years ago. The video shoot was stress free, we actually shot it in Arizona and invited a handful of home state fans to participate.

Instead of shooting a high budget looking video we stripped everything down and just jammed in a garage the way so many of us have in our early days. It felt good to just capture some of the essence of being naive and just loving playing music with your best friends.

The meaning of the lyrics behind the song are how music has been the anchor for our lives. Everyone goes through crazy shit from time to time and we all have found peace through music in those moments. We feel it’s important to write about what music can do, because it’s the most powerful thing we know. It changed our lives, and we hope people watch “The Runaway” and feel that power music holds.” 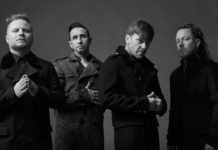