The Birthday Massacre released their sixth full length studio album, Superstition last month. What was special about this release was that the band received a helping hand from their fan base. Superstition was allowed to be written and distributed thanks to fan funding via Pledge Music. The Birthday Massacre showed their fans their utmost gratitude by creating special packages for those who donated. We spoke with Chibi about the writing process of the new record, their humble attitude towards fans and what superstitions she believes in!

Substream Magazine: For your new record, you all received help from your fans via Pledge Music. Did this affect the writing process in any way?
Chibi: It definitely effected the recording process because this time we were doing updates for people who are contributing.  We focused exclusively on the writing and recording, we were trying to document different elements of it to share with people and so that was something we had to be aware of this time that we hadn’t ever had to do before so it was kind of interesting.

SM: You offered personal forms of gratitude in your Pledge Music, for example, taking your fans to dinner or having them be present in the recording process. How important is it to you maintain more than just a “thanks for being a fan” relationship with your fan base?
Chibi: I mean, especially with various crowd-sourcing campaigns it’s essential to give people something unique.  When we were going into making his decision to do this Pledge music campaign we thought about it a lot and we thought, “OK, what would we want as fans of a band.  What would make this worthwhile for us?” So we really tried to make some personal and different things.  Not everybody can afford crazy, insane things.  So we just wanted to make it fun and reasonable.  And I hope we succeeded, I mean, we made 100 percent of our goal within the first twenty four hours which is amazing.  I mean, we’re so grateful for it, we’ve always tried to maintain a good community and good relationship and good interaction with our audience.  And i think this campaign definitely showed us the amount of support that we have from people, and it’s been nice to interact with people personally through some of the film, it’s been amazing.

SM: The Birthday Massacre, has invented it’s own genre of multiple elements. Has it been difficult maintaining your own unique style since your debut EP?
Chibi: I mean, we were never trying to be really unique.  I mean we like lots of different genres of music and so we’ve created the type of music we would want to listen to.  We listen to everything from metal to industrial to pop, so combining all of those different elements together was just the music we were going to make.  We’ve got a few albums out now and people could say, “Oh is it more difficult to write now that you’ve put out so much music?” But in a way it’s actually become easier because our relationship together writing and growing together as people, it’s almost more fun now than it was a few years ago to start doing an album together because we just enjoy working together.  We have a good working relationship and things just never feel like work.

SM: Well that’s good, especially since you’ve been together for so long now!
Chibi: Oh yeah! Trust me it’s been challenging at times, but we’ve definitely all grown together as people.  Working relationships and creative relationships have improved, thankfully (laughs)

SM: What can you tell me about the cover art of Superstition? Aside from the beautiful scenery, the bunny hats really stick out in the contrast of the violet and black.
Chibi: The album concept, or the title: “Superstition”, is more or less spiritual beings in the music this time around is something we were all focused on a bit.  Just the image of the figures against the water, sort of looking out over the water wondering, “What’s out there?” Which is a lot of what we’ve been thinking about spiritually the past year.  Sort of the great unknown.  Also on our last album, “Hide And Seek”, the closing track, the sort-of outro has this sound of water and so we wanted that to lead into the next album. This sort of, long way home, waters down, fleeting into the new album.  This, What’s beyond, what’s out there kind of thing  I mean, the bunny ears have always been a part of us and they probably always will be.

SM: The way that this record was written, was almost like a cinematic piece with each track being it’s own dramatic scene. Where did the inspiration of Superstition draw from?
Chibi: Well yeah, speaking lyrically, because my focus is the lyrics, it was definitely a year of exploration.  I don’t want to say I had a “dark year”, but I had some losses close to me and it makes you think.  And so there was a lot of introspection, Me and Mike and Rainbow sort of had the approach to songwriting as looking into ourselves and looking externally and we’ve always been really inspired by movie soundtracks as well.  So this year there’s a cinematic element showing up which is great because that’s something that we’re interested in and something that we’re trying to have within the song writing, for sure.

SM: If I were to Google The Birthday Massacre, I find an excessive amount of Depeche Mode comparisons…
Chibi: I mean, we love Depeche Mode, that’s one of the bands that we grew up listening to.  We’re kids of the 80’s, so there’s going to be a lot of 80’s influence in the music, and I don’t mind, ever, getting comparisons to band that we love.  I think the only comparisons that kind of bother me are when we get compared to female-fronted bands that we have nothing in common with musically because I think they’re just like, “Oh these two bands have a girl singer so we can just kind of lump them into the same category”, that’s the only time I’m like, “What are you talking about?”

SM: What are you superstitious about? Do you believe in any urban legends?
Chibi: I love urban legends, I think that kind of stuff is really interesting and creepy, I love horror stories and all that stuff.  But I am a very superstitious person.  Usually it’s clothing, I know that sounds kind of weird, but for example, I sprained my knee two years ago at a show and I’ll never wear the outfit I was wearing that night again because now I’m like, “That’s what I wore when I sprained my knee and now it’s bad luck” or something like that.  It’s almost like the hockey players with their playoff beards, it’s like every time I wear these shows I have a really great show, every time I wear this dress I have a terrible show, so then I’ll stop wearing that dress.  It’s weird (laughs) 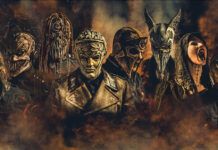 INTERVIEW: Mushroomhead discuss ‘A Wonderful Life’ + releasing a record during a pandemic