For the past five years, Tesla Rossa has been silently running wild at house parties and basement shows around the country.  Now, the band is finally releasing its self-titled debut album.  A lot can happen over five years, and Tesla Rossa stands as evidence of that. The album showcases a dynamic collection of songs varying greatly in musical influence.  One moment roars as wildly as any garage rock jam, the next comes gently crooning, dancing over strings, or dabbling with sitar.

“We always kind of joke that we’re the modern rock version of a throwback band, or like a throwback band from the future, because we do have a lot of those sounds that rock and roll was built on but we always try to wrap it around some kind of new thing,” says vocalist/guitarist Jason Denton.

The trio, finished off by Ryan Tullock and Nathan Wahlman, gathers an eclectic mix of influences channeled into one blend of sounds that defines Tesla Rossa.  Even between members the influences differ.  “I’m much more of a rock guy, Nathan loves jazz, Ryan’s much more of…he loves pop and more of the hip hop world,” Denton explains.

It’s not only the wide collection of influences that leads to the diverse style, the time spent together as a band plays directly into where Tesla Rossa is now.  Five years’ time provided the Nashville group with a collection of songs spanning a variety of directions influenced by their own lives and musical interests during that time period.

“We felt like we kind of went through the first three album cycles in those five years,” Denton recounts.  The band started off playing wild shows and “just making music people would love live.”  The time before the debut gave the band members a chance to build off their more garage rock leanings into new territory.  They spent the time testing audience reactions and showing their songs around their home of Nashville.  This led to experimentation and more developed songs. Tesla Rossa contains a combination of everything the band has done thus far, culminating in a mature and varied collection.  Obviously, the final album resulted from a series of cuts, but Denton holds that the time allowed for them to consider their songs objectively and “move past the songs emotionally.”  He explains that this clarity allowed the band “to make decisions based on what was best for a debut album.”

When the band finally set out to record the debut, the group worked with Vance Powell, known for contributing to the straight-forward, honest sound of groups like Jack White and The Arctic Monkeys.  True to that style, Tesla Rossa decided to record analog to 2-inch tape, an atypical decision for a debut record.  Of course, that wasn’t the only atypical part of the recording process.  The album continued to be worked on after they left the studio.  “We remixed that whole record in our own house,” Denton comments.  “[S]o we took our time and we really got to just dive in to all the tracks that we had made and just decide what needed to be heard and how it needed to be heard.”

The five years of Tesla Rossa are evident in the group’s debut.  Listening as the band drifts between influences, it’s apparent that the album has been long in the making.  “It was just this crazy ride of not really knowing where we wanted to go with it,” Denton recalls.  “We finally just ended up here and we were like ‘you know what, that’s exactly where it needed to be’” 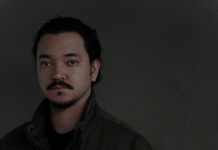