British pop sensations Rixton just wrapped up their headlining US Broken Heart Tour this past weekend with two sold out shows in Los Angeles at the iconic El Rey Theater. With their single “Me And My Broken Heart” hitting Platinum in the US, UK, and now Sweden, the band is reaching a level of success that has been seen by other artists that share Scooter Braun as a manager: Justin Beiber, Ariana Grande, The Wanted and more.

While technically being a ‘pop’ band, Rixton pulls influences from artists across the music spectrum, with a lot of their influences being R&B. Their sound has been compared by the likes of Maroon 5 and Usher, and they even graced LA’s presence with their popular cover of R.Kelly’s “Ignition Remix,” and I know the Justin Beiber’s of the world could not have executed that cover as flawlessly as Rixton did that Saturday night.

The LA audience was surprised after Rixton played their brand new single, “Wait On Me,” the infamous Scooter Braun glided on stage to steal the mic from vocalist Jake Roche. Scooter told the band AND the audience needed to amp up the volume , as they were filming a live version of “Wait On Me” to be premiered digitally later this year. As the band was about to play the song for a second time, Scooter snarked at Jake, telling him “I suggest you fix your hair before we start recording.” Jake seductively brushed his hand through his messy hair and began the first verse of “Wait On Me” as the crowd screamed and danced in approval and excitement.

Rixton’s set was full of fan favorites including “Makeout,” their collaboration with Ed Sheeran, “Hotel Ceiling,” and their multi platinum single/title of their EP, “Me And My Broken Heart.”

There’s something about a Rixton show that sets them apart from other pop artists – they have an un-deniable connection with their fans and their audience, and they put their everything into each and every single performance. Rixton is known for playing multiple shows a day on every day of the week for the opportunity that they may be sharing their music with someone who hasn’t heard it before. They are genuine, hardworking, and extremely talented UK lads and I can’t wait to see what’s to come for Rixton!

Review and photos by Rachel Martin 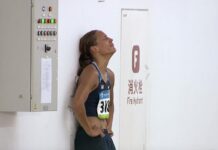